With the (on the month this review was written) announcement of the second Senran Kagura TV anime set for a Fall 2018 premiere I figured now would be as good of a time as any to write a review about a series entry on the blog. Better late than never. Let us begin our venture into the world of (mostly) busty shinobi in training, with a major twist this time around, as we take a look at Senran Kagura: Peach Beach Splash.

Note: This review mainly focuses on the single player content as I was unable to try out the Multiplayer Mode.

Length: 20 hours or so for the Single Player content. Multiplayer depends on player interest.

Plot Summary: The game’s plot focuses on the Peach Beach Splash water gun tournament, which has been held by ninjas since ancient times. In it, participants are not allowed to use their special ninja abilities, instead being given water guns to use. Shinobi from various factions have been invited to the tournament, and fight in teams; the winning team is said to get anything they want as a reward.

The main 20 girls. Alongside the main 20 PBS features the largest cast of playable girls, In-game and DLC, in a localized Senran Kagura game by far.

With this being my first Senran Kagura themed review on the blog allow me to explain the gist of what the series is about. Think something akin to Hyperdimension Neptunia but with sexier kunoichi (female ninjas) than what one would find in Naruto. My comparison to Neptunia is that there are two stories being told in each installment: One is a fun-fun silly-willy tale of sexy/ecchi ninjas having fun when not training to be elite shinobi. The other is a tale of groups of teenage girls (and some young adults) training to become the agents of light or darkness to take on missions of extreme importance that could threaten the fate of humanity all while combating against robot drones, kunoichi clones and other kunoichi babes in battles where their clothing slowly get torn to shreds. The girls must also confront personal demons of varying intensity that go beyond the cute and sexy exterior of the series. Again, Neptunia with sexy ninjas but with a higher level of ecchi goodness. 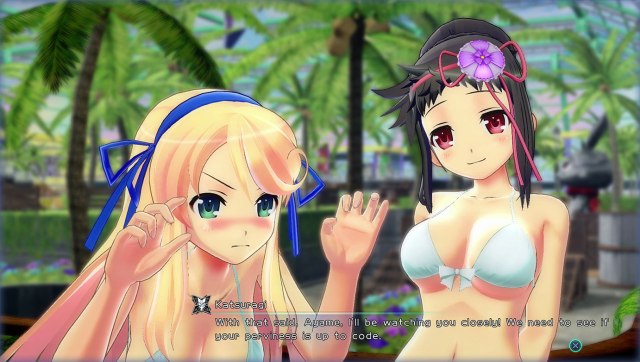 The Naughty Legend and her protege/loving fangirl.

Like the Neptunia series Senran Kagura has spinoff games. While Peach Beach Splash may look like a spinoff on the surface it is actually a canon entry in the series despite it feeling like a spinoff. Having said that the main story is not as long or intense as previous entries but is still enjoyable playing through the four starting campaigns as bits and pieces of the truth behind the PBS tournament is revealed depending on which campaign is played, leading to a major conclusion once the four are completed. The same goes for the character development. For most of the girls the struggles they face may not seem as complex as past entries but are enjoyable regardless. It is still important development for most of the girls on their respective journeys and there may be a surprise or two.

Oh, and if this is the first Senran Kagura game the reader picks up no need to worry about feeling lost due to it being the third canonical entry. Some past events are brought up but nothing super spoiler-y. More like incentives to play the previous games and learn more about the characters and lore.

The graphics are the most crisp the series has seen yet (as of this game at least). The detail on the ladies’ bodies such as some of their shiny legs to their soaked bodies is a most pleasant sight in terms of anime-esque games. The main story cut scenes while some of the girls borrow physical expressions still look nice. To me it is like Senran Kagura took the 3D cut scenes Hyperdimension Neptunia Mk2 used but nailed it and kept on improving with each new entry in the main series. The stages look good too with a solid selection of battlefields from the PBS arena to an ice castle. The soundtrack is solid. Not as memorable as that of past entries but the tunes fit the motif of “bikini babe water gun battles”. As far as performance goes for the most part the PS4 version runs at 60FPS though depending on how much chaos there is on screen it may drop to 30-40FPS but nothing major. This most likely is not an issue on the PC version provided the player has a strong enough computer.

Like I said above I was only able to go over the single player content which consist of the Story Mode, Paradise Episodes and V-Road Challenges.

Story Mode has the chosen team (Hanzo, Gessen, Hebijo or Crimson Squad) go on missions where they take on waves of drones and clones, face off against enemy teams/hidden characters, take on an identical mission (players will know which one it is when they see it) and end with big boss fights. If I were to rank the campaigns from favorite to least favorite it would be the following:

Paradise Episodes, like Heart Episodes in previous entries, are side-stories with more challenging objectives such as a 1 vs 4 handicap match depending on the chosen side-story.

V-Road has the player form a team of whichever 5 girls they choose to take on other teams in various challenges.

Completing all the missions and the V-Road challenges could take around 20 hours or so so there is enough content for readers who do not own a PS+ account. Even so the main reason for the less meaty than usual story is because it is more of an enhanced tutorial to prepare players for the online Multiplayer. For more details on that check out the paragraph talking about it in this other review HERE. 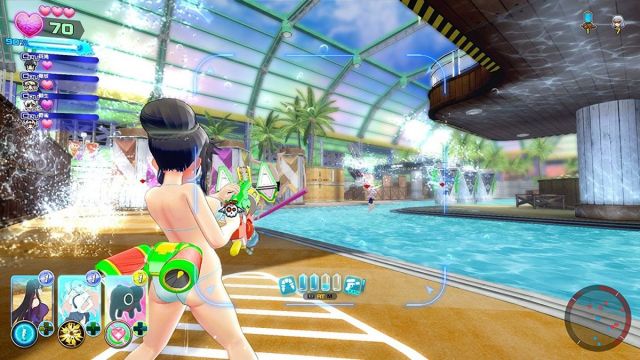 At long last we come to the gameplay. As explained in the genres section this is a third-person shooter (splasher) where teams of up to five kunoichi compete against each other in a sexy splashdown of epic proportions (not the correct use of the word but it sounds cool and fits the description, so yeah). Each girl comes equipped with one of several water guns, from dual pistols to rocket launchers, and special cards. The cards are divided in three types: Skill (for example barriers or stat boosts), Power (such as sparks and barrier breakers), and Pet (little creatures who assist the girls for a short time.). Like any other card game they are divided from Common to Ultra Rare cards and the cards that have similar abilities, for example Ryona’s attack boost cards, are/become stronger based on their rarity. Part of a winning strategy is collecting cards throughout single/multiplayer modes and creating the best deck for future battles. The other part is choosing the preferred weapon and sexy warrior. It is not immediately noticeable at first glance but like previous entries the girls do have different stats (Attack, Defense, Speed). They also have different close ranged strikes that do good damage but leave them wide open for a bit. There is no collectible ammunition in this game, rather it is all about shooting and reloading. That is where the guns and aqua jets come in. The chosen gun determines how long it takes to reload. For example, the Pistol reloads quicker than the Gatling gun. Another use for the water is in the aqua jets. This is used for double jumping and dashing through the stage. Depending on the character and (mostly) the weapon the girls can either perform double jump boost or hover upward. For added strategy the girls can fire while dashing or hovering. Basically the action is as fast paced as any other shooting game out there but with the added ecchi goodness Senran Kagura is known for.

Besides the in-game shop where players can purchase available/unlocked music, movies, outfits, accessories and cards using the in-game currency of Zeni there is also the traditional Dressing Room. It is similar to previous entries and its younger sister game Valkyrie Drive Bhikkhuni. Like past entries it serves the purpose of changing the girls’ in-game appearance (Should the player prefer the classic style of tearing clothing during battle it can be done here), go ham with the Diorama option and of course get “intimate” by fooling around with the ladies. Only difference is that this time they can also be squirted. 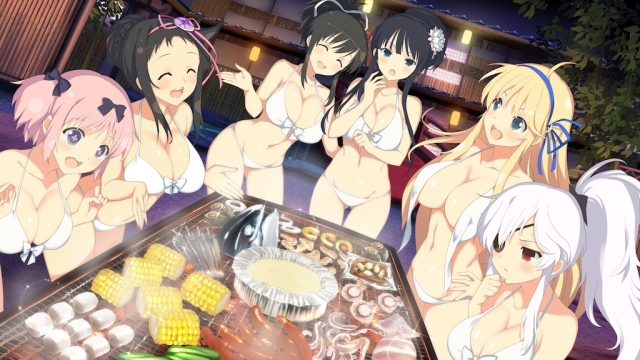 Now what readers of this blog have been waiting for. Besides The Naughty Legend other lesbians (some bisexual) exist in the series, including some of the Guest Characters such as Kan-U (Guan Yu) and Ryofu (Lu Bu). Other characters who have strong vibes together also show a bit of it in the story such as Asuka X Homura (Destined lovers through combat).

Overall Senran Kagura: Peach Beach Splash is an enjoyable third-person shooter/splasher that favors  fast-paced action over duck and cover (though such strategies are certainly applicable). While the Story Mode is not the best in the series it is still enjoyable and delivers some neat character moments. Graphically it is the best in the franchise by far and the soundtrack fits the motif. Recommended to fans of the franchise and newcomers who do not mind fun and stylish ecchi games.

The game is available at retail and digital stores along with Steam.