The following four shows I will most likely continue watching but not cover weekly due to there not being much to discuss in them. Instead I will review when they’re finished. I will explain as we take a look at them. 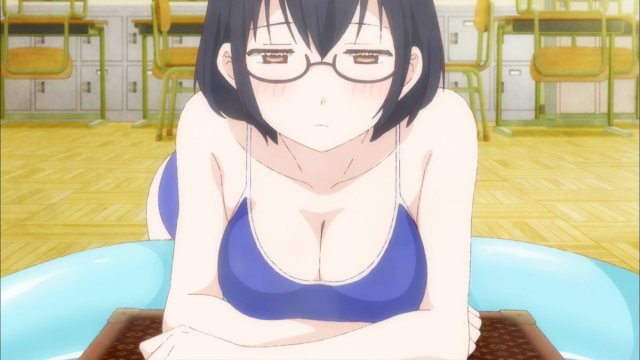 First of all let us take a look at Asobi Asobase. The show is about three girls forming a club where they challenge each other to strange games such as rock-paper-scissors with a painful twist or seeing how fast the girl can pierce the table with a sharp object without cutting her fingers. 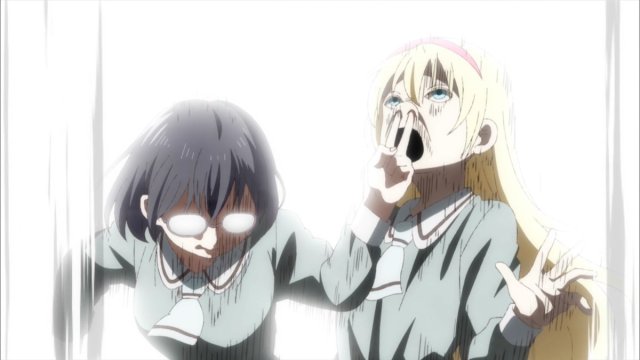 The “painful twist” I mentioned.

It is a slapstick comedy that features super crazy facial expressions similar to those found in Kakegurui but not as creepy. I would describe the humor as an acquired taste as not everyone digs it. I personally found it hilarious. It is my second favorite comedy premiere from the shows I picked to watch this Summer.

Oh and the ED is a better description on the kind of show AA is. 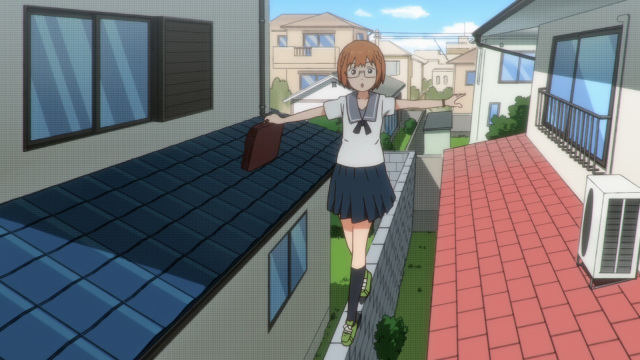 Chio-chan trying to get to school.

Next up was my #1 comedy premiere in Chio’s School road/Chio-chan no Tsukaguro. It is about Chio-chan’s crazy everyday adventures as she tries to get to school on time. Both Chio-chan and the megane protagonist from Asobi Asobase have something in common. The first episode had Chio-chan staying up till 4:30 AM playing an Assassin’s Creed like game and TRY to put those “skills” to the test. It is funnier seen than described. Chio-chan also overthinks things, especially in the second half of the episode when she was surprised by the popular girl waving at her. Again, of the three comedies I picked up Chio-chan’s School Road is the one I’m most excited to watch this season. Supposedly there’s some yuri in the show. I’m interested in seeing where that goes when it pops up. 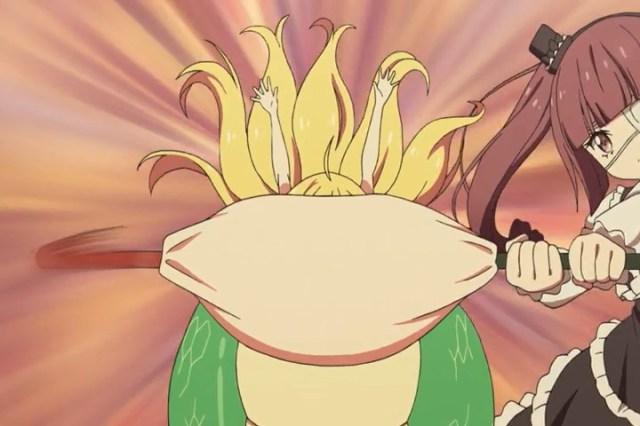 Third is Jashin-chan Dropkick. This was the show I was the most concerned about. It gave off Dokuro-chan vibes based on the description. I mentioned several times how much I LOATHE Dokuro-chan. To my surprise I wasn’t enraged by the Jashin-chan premiere. In fact she’s a billion times more likable than Dokuro-chan. Having said that this is the show that made me laugh the least. Don’t get me wrong, some parts were hilarious but compared to Asobi and Chio-chan this one had fewer gut busting moments for me. In any case it’s a show about a Goth girl accidentally summoning an annoying demon. Said demon spends most of her time trying to kill the Goth girl, all while following the rules and playing dirty at the same time, so she can be freed from their contract. For some reason the anime started at a point where most of the leading ladies were already introduced. My best guess is the show is aimed towards an audience who have already read the manga. Dunno how newcomers will feel about this but I’m guessing some will have no problem getting into it. The show uses Warner Bros cartoon logic where they know they’re in a slapstick comedy TV show and talk to the cameraman and audience. Also Jashin-chan is like a Saturday morning cartoon villain, which is delightful.

There’s also a lesbian who based on the OP and ED has a relationship with Jashin-chan similar to that between Ika Musume and Sanae. We’ll see what happens when she’s introduced. 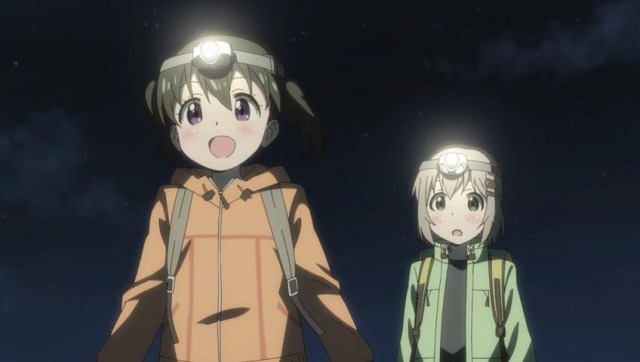 Lastly we have Yama no Susume/Encouragement of Climb 3. For newcomers who have yet to pick up this series think of it as Yuru Camp’s calmer older sister. Because of this however, there isn’t much to talk about despite the show still being excellent. The show has six bullet points:

1: Aoi X Hinata are an oh so precious couple and they will get married in the very near future.

2: Kaede is the group’s sexy senpai who sometimes blesses viewers with her hot bod but mostly acts as the veteran guide for Aoi and the audience.

3: Kokona is a gift from the anime gods whose cuteness can melt polar ice caps.

4: Wondering when the newcomer Honoka will show up again.

A seventh bullet point would be their casual lives but that is to expected from Girls Club shows.

Again it is like Yuru Camp but much more subdued. Like season 2 the episodes in season are around 13 minutes long, which is REALLY good for “shorts”. Also the reason I won’t be discussing it weekly is because it would feel repetitive. Take my word for it. Yama no Susume is a great iyashikei series about mountain climbing.

For newcomers check out my review of the previous two seasons HERE. Also be sure to watch the pre-season 3 special Omoide no Present.

There you have it. I am enjoying all four shows but none of them have enough material for weekly coverage, meaning I will review them once they’re done.