We joined our heroines getting excited for Christmas. All but one. Ruki wasn’t all too thrilled about the holiday season. It was due to her having a deadline near Christmas and with her being single and an author of an erotic romance manga it was so hard on her that looking at any kind of romantic setup, be it a “supportive” fan letter or helping out with Tsubasa’s obligatory romantic holiday chapter made her miserable. Koyume tried supporting her but Ruki’s all like “Damn it you already have Tsubasa!” The above image also happens to be my favorite Ruki scene of the episode. Her crying there equaled KAOS’ vintage comedic pessimism.

The thing about Suzu recently is that while her screen time had lessened every time she shows up it’s GOLD! Every time. Also a certain fan of mine had been YEARNING for more red-eyed Suzu. Here you go. 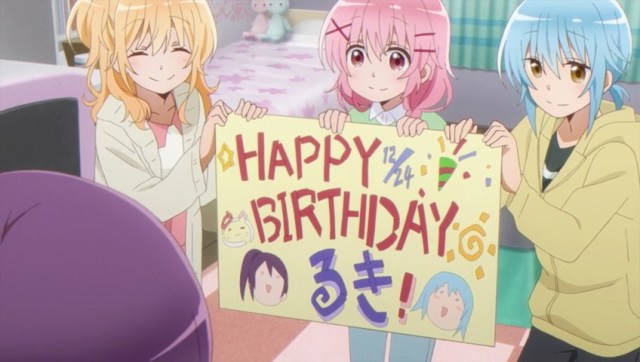 Having no luck finding an answer for her romantic woes Ruki returned to her room when she was surprised by her brahs with a B-day greeting. Ruki’s birthday was on December 24th. To everyone’s shock she turned 16 that day. Koyume and Tsubasa had nice gifts for her. Then we got to KAOS’…and…

Magnificent. Chalk this to yet another reason why KAOS is our #SpiritAnimal. She also had the answer Ruki was looking for, she had all the love she needed the entire time, though how she worded it…yeah. 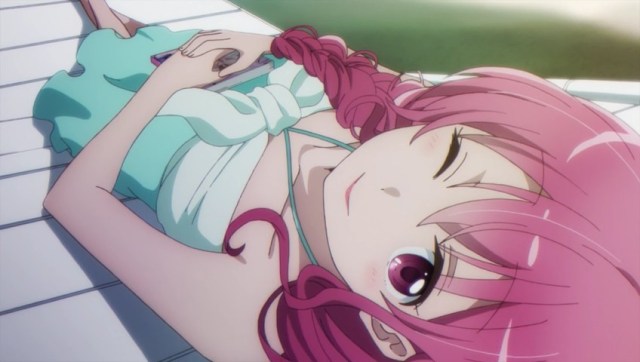 The second part of the episode had our heroines going to visit their families for New Year’s. Unfortunately KAOS didn’t expect her parents to have won tickets to Hawaii. #HotKAOSMama. Koyume and Ruki offered to invite KAOS to their houses but neither were able to accommodate her. That left Tsubasa…

You can't say no to that face. And those bishoujo figurines face. pic.twitter.com/3IqTk2vzd8

So off they went to Tsubasa’s place and… 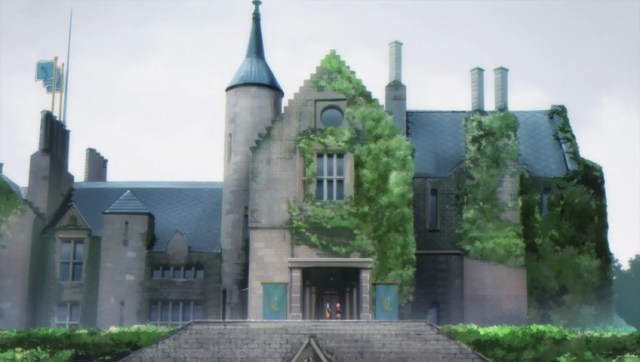 Never have I envied someone as much as I envied Tsubasa. For those who follow me on Twitter I brought up my dream of owning a castle. Not only did Tsubasa’s family own one but IT COMES WITH EPIC GAME OF THRONES MUSIC THAT PLAYS EACH TIME IT IS SHOWCASED! ENNNNNNNVYYYYYYYYY! Also KAOS was on fire the whole segment. So good.

So yes Tsubasa’s an ojou-sama. All throughout the visit Tsubasa seemed to have trouble acting like an ojou-sama. She was a year out of practice after all. I know how that feels. The one who paid closest attention was her mother. She was about to learn the truth when Ruki came to the rescue.

Ruki still has to work on her Photoshop skills I see pic.twitter.com/zw6CHHYRsg

Not the best editing but it was good enough. HOWEVER…

Hot but terrifying. She makes Suzu Fuura look like Cindy Lou Who in comparison.

Incurring mother’s wrath was ill-advised. We learned the reason Tsubasa moved out of the castle was because she couldn’t be free while there plus her family didn’t approve it. It took some convincing by Ruki for them to let her go. Someone on Twitter mentioned the entire castle segment being a metaphor for LGBTQ children living in a strict household. I forgot to save that tweet. I’m sure my friend The Doc will find it.

Here it is. Thanks Doc.

I don’t have much to say regarding the third segment of the episode. It was mainly about the girls discussing the value of their manga and reflecting on their past manuscripts as they burned old pages. Each girl saw it in  different light. It was nice listening to them discuss it.

Suzu Fuura put all of Hollywood to shame in less than five seconds.

Like I said earlier, Suzu doesn’t get much screen time nowadays but when she does it’s always magical to the point viewers see her scenes as the best parts of each episode since her debut.

Next time we’ll go over the “dormitory is closing” subplot. We’ll see how that goes.

Yuri and Slice of Life are my anime passion.
View all posts by OG-Man →
This entry was posted in Episodic Anime posts and tagged Comic Girls, Episode 10. Bookmark the permalink.