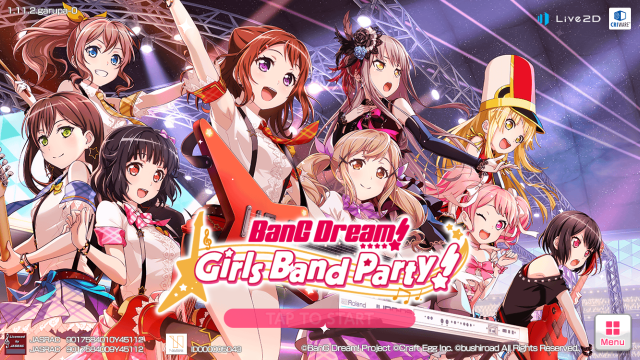 Note from OG: Since I don’t own a strong enough tablet and my phone doesn’t have enough RAM to play this game at the necessary speed I asked my good friend Rory from Rory Muses for assistance by giving everyone an idea of what to expect from the recently localized successor to Love Live! School Idol Festival. Take it away Rory!

BanG Dream! Girls Band Party! is a rhythm game that was released in Japan on March 16th 2017, and had a worldwide release on April 4th, 2018. It is available for both iOS and Android devices.
I’ve been asked to share my thoughts on the game, and that is exactly what I intend to do with this post. I’ll mention here that I will be comparing Bang Dream! Girls Band Party to Love Live! School Idol Festival (which I’ll refer to as LLSIF), since both are rhythm games published by Bushimo.
You can watch the BanG Dream! anime series on Crunchyroll or HIDIVE. It is also worth noting that HIDIVE has the BanG Dream! OVA as well. My review of the anime can be found here.

So, how does BanG Dream! Girls Band Party! work? Well, it is a free-to-play mobile game, which means there are optional microtransactions. I’ll focus on that aspect of the game in a moment. 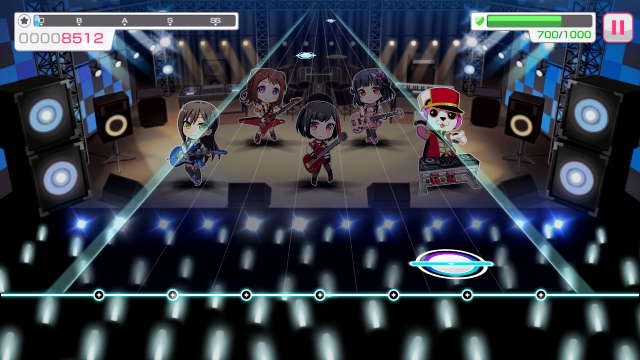 For now, though, let’s focus on the rhythm game aspect. It’s pretty standard fare; you have to tap notes that scroll down the screen in time with the song that is playing. The look of the game invokes Guitar Hero, with notes effectively running down a highway.
There are different types of notes as well: you will tap, hold, flick and slide your way through the songs. You’ll encounter more of these in higher difficulties, which is pretty much what you’d expect of a rhythm game anyway.
There is a healthy selection of songs available. Naturally, you’ll be starting with Poppin’ Party songs, but you will unlock more from other bands as you progress through the game.
Alongside the original songs, there are also cover versions of anime theme songs. This includes the likes of Gurren Lagann‘s ‘Sorairo Days’, K-On!‘s ‘Don’t Say Lazy’ and Attack on Titan‘s ‘Guren no Yumiya’. I’m not familiar with all the cover songs that are available, but I’d imagine some anime fans will be.
It’s not just anime songs that are covered, either – the Vocaloid song ‘1, 2 Fanclub’ is also part of the selection.
…and yes, BanG Dream! Girls Band Party does include ‘I-I Never Said Love!’, which is Arisa’s song that… well, you should discover it for yourself if you aren’t already familiar with it.

You won’t be playing very many songs without a band, though. When you start the game, you’ll have the five members of Poppin’Party. As you read through the main and band stories, you’ll unlock the characters from four other bands: Roselia, Afterglow, Pastel*Palettes and Hello, Happy World!.
This gives a total of 25 characters, and there are a whole host of personalities to become familiar with.
I’ll talk a little more about some of the characters in a while; I’ve already picked out a few favourites.

A band requires five characters, and you can mix and match them as you wish. If you want to have a band that is made up of one character from each of the bands available in the game, than you can do so.
Much like LLSIF, the characters on you pick do have an effect on your score when playing through a song. They each also have their own skills, that do things like boost your score or restore some energy when activated.
Each character has one of four attributes, though the attributes don’t affect your score when playing Live. Attributes are used for Event bonuses, and you’ll also need specific fragments of the same type in order to Train your members.

Training is very much like LLSIF‘s Special Practice. Characters who have a rarity of three stars or four stars can be trained when they hit the max level. Levelling up can be done by playing songs, or using tickets in practice mode.
Training a character will increase their stats and level cap, as well as new artwork for that particular character.

Though you can use the initial characters the game hands you, sooner or later you’ll probably want to get hold of some more. This can be done via the gacha – no ‘scouting’ or ‘summoning’ here; the game just outright calls it what it is.
The currency used for the gacha are Stars. These can be bought via microtransactions. If you don’t want to spend any money on the game, Stars can also be earned by reading through characters’ episodes, completing various missions and as login bonuses.
250 stars will be enough to give you one pull on the gacha. If you spend 2500 Stars, you’ll get 10 pulls and at least one guaranteed 3 star or higher character.
There is also a Special Gatcha that contains only 3 and 4 star characters. You’ll need Gacha Tickets for this one, which can only be bought through the Exchange using Michelle Monakas.

For those who have played LLSIF, you will be in very familiar territory with the gameplay and gacha stuff.

This map feels rather similar to a certain event from LLSIF…

The game effectively has a world map, which allows you to access various places. By visiting those locations, you may find characters who have conversations. The first time you view these conversations, you will earn experience for the bands that the characters are part of.

The ‘new’ symbol indicates conversations that haven’t been viewed yet

There’s also shops which allow you to buy various items that will boost your scores. You’ll also find a music shop in which you can buy cover versions of anime opening themes to play – providing you have enough of the correct currency.
Going back to the conversations the bands have, they are just small conversations that tend to be on the amusing side.

This point seems like a good one to start talking about the characters, so that is exactly what I shall do right now. 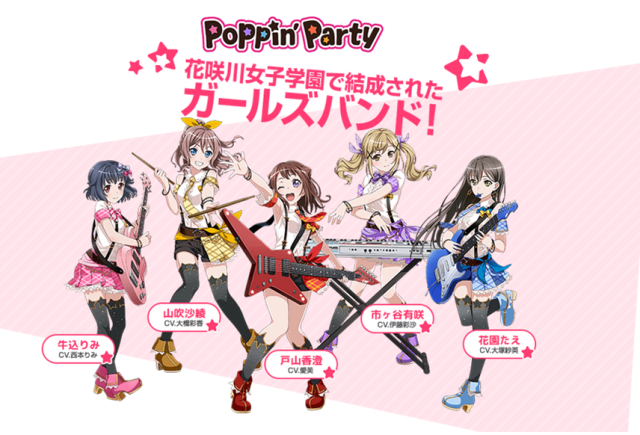 I’ll start with Poppin’Party, who I will only briefly focus on as they got an entire anime series. Kasumi is my favourite of the band members here; something about her boundless energy just appeals to me a lot.
I like the rest of the band too, though that’s probably a given considering that I really enjoyed the anime.

Next up, Afterglow. I’d pick out Ran Mitake as my favourite from this band, but perhaps that’s because she was the first ever three star character I received from the gacha. Even before that, though, that red streak in her hair that is very reminiscent of Kill la Kill‘s Ryuko Matoi got me good.

From Pastel*Palettes, an idol band, Eve Wakamiya is my favourite member. She comes from Finland, and is absolutely obsessed with Japanese culture. In particular, she often talks about bushido.

Roselia is a band that those who have seen the BanG Dream! OVA will be familiar with already. Picking out just one favourite here is tough for me; I really like both Ako Udagawa and Rinko Shirokane. Ako is a chuunibyou (very similar to Love Live!‘s Yohane), and Rinko is the shy type. Both enjoy playing online games together, and are best friends. BanG Dream! being what it is, I’ll let you interpret what exactly ‘best friends’ means.

Finally, we have Hello, Happy World!. From this band, I’d say either Kaoru or Michelle is my favourite character.
Kaoru is viewed as a prince, and as such she has many female fans. She is fairly dense as well, especially when it comes to Michelle’s true identity.
Though I mentioned Michelle is a favourite, it is actually the character inside the suit I’m referring to. The game doesn’t keep her identity a secret or anything, but at least a couple of the Hello, Happy World members don’t actually realise who Michelle actually is. Michelle’s reactions to the… let’s call it ‘loveable idiocy’ going on around her are what sold me on this particular character.

I’ve covered how the game works and its characters, but I feel the most important question certain people want answered is how gay is this game?
…and if that’s not a question people are asking at all, it doesn’t matter. I won’t tell you, though; I’ll let the game show you for itself. 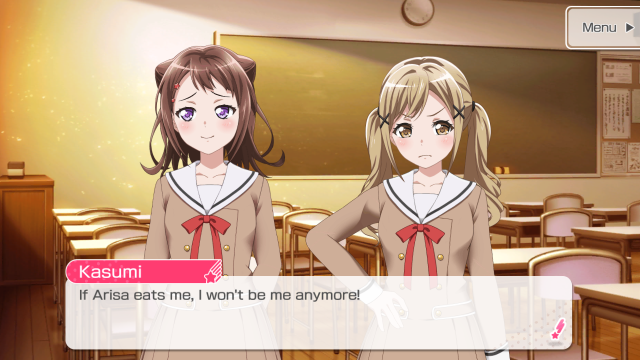 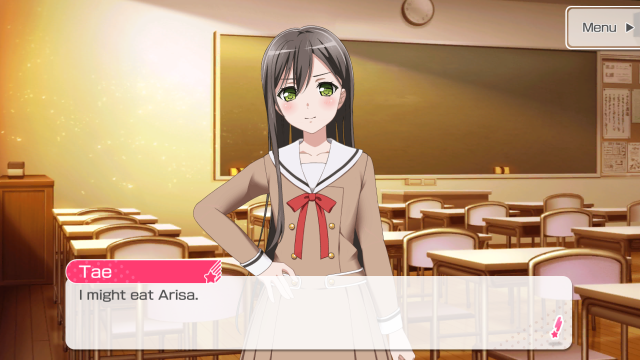 This makes sense in context.

Amusingly, Ran says that is exactly what it is.

The scenes above are from fairly early on in the stories. I’ll let you draw your own conclusions about the level of yuri here.
Something I’ve neglected to mention, actually, is that the characters are animated when talking to each other. It’s nothing too flashy, but it does give some life to the characters.

So, is BanG Dream! Girls Band Party! worth playing? Well, if you enjoyed LLSIF, then this is a game that I can easily recommend. In fact, fans of rhythm games in general will most likely have a good time with this title.
You don’t have to sink any money into it if you don’t want to, but that option is always there just in case you get the sudden urge to pursue a specific character from the gacha or something.
It may not currently have the same number of songs as LLSIF, but the game was only recently released at the time of writing. I’m going to go out on a limb here and assume that more will be added in the future.

If you’re craving more BanG Dream! after having watched the anime, then Girls Band Party! is the way to go. It’s an enjoyable rhythm game that expands the world of BanG Dream! and has some truly great interactions between characters.

Once again follow Rory on Twitter and visit his blog Rory Muses for more Yuri goodness and other stuff that piques his interest from manga to video games. Thanks again for the assistance good sir.

I enjoy writing, manga, anime and video games, so naturally here on my blog, you will find anime reviews, Nintendo news and other such things that I deem interesting.
View all posts by Rory →
This entry was posted in Yuri Video Game Reviews and tagged BanG Dream, BanG Dream! Girls Band Party!. Bookmark the permalink.