We were treated with a double feature premiere of horsies. Our mission to find as many gay horsies as possible has begun.

After learning this show set in an alternate Earth where horse girls exist alongside humans we joined our heroine Special Week (Race horses are known for having unusual names but I have a theory why our lead cutie was named that) looking for the school she would be attending, Tracen Academy, but got lost. A nearby attendant helped her out a bit and then asked if she wanted to go check out the race track. She figured since there was plenty of time before curfew she would accept. #Foreshadowing

At the track she would meet the horsie that would forever change her life, Silence Suzuka. One of the best newcomers in the current generation.

I do so dislike the “male coach of an all-girl team” cliche.

Unfortunately she also met this guy who “professionally” checked out her legs to see how strong she was. As long as they keep his perversion to a minimum and/or he gets destroyed often like in episode 2 I’ll tolerate his presence. Anyway they saw Suzuka easily dominate the race and Special was left in awe.

So the first excuse to include idol performances in this show is that the top three racers would have to perform a song after the end of the race.

The next day Special tried to make a good first impression but failed. she met some of her classmates, the one who stood out was El Condor Pasa because she’s American (Probably from Texas or Mexico), is NOT BLONDE (The sky must be falling) and wears a kind of luchadora mask. Possibly ship her with Grass Wonder. 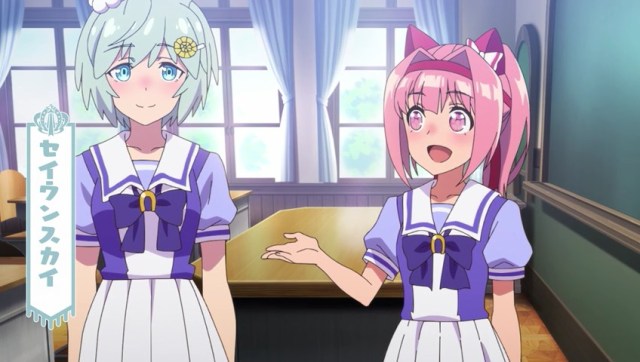 The other two horsies who quickly approached Special.

There are other horsies who popped up throughout the two episodes which tells me this is going to be another one of those shows where the cast is huge but a select few will get the spotlight. Anyway they talked about the teams and Special mentioned wanting to be on the same one as Suzuka. Grass Wonder said there would be a qualifying race to join the group Suzuka was in. Special entered immediately. 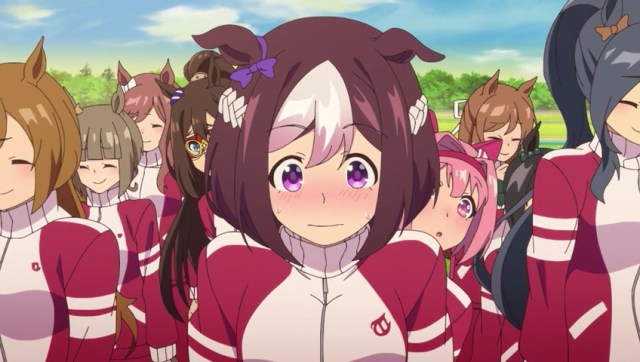 Before the race the coach asked the girls what their goals were. When she got to special she said she wanted to become the best horse in Japan as a promise to her mom which got the others to laugh at her. It didn’t help that Suzuka wasn’t there.

After the whistle Special had a delayed start. Luckily for her she spotted Suzuka watching from afar. She remembered the technique Suzuka used in her race and used it herself to the surprise of everyone. Unfortunately due to her delayed start she came in 2nd place. El Condor Pasa won the race just as Grass Wonder hoped from the looks of it.

At this point in the show Gold Ship, the one in the middle, looked the closest to a horse.

Lookie there. Suzuka is actually part of Team Spica.

So yeah. Despite not winning the race and being “horsenapped” Special got her wish of joining the same team Suzuka’s in, Team Spica. Suzuka explained her goal of inspiring everyone to follow their dreams by watching her race. Special was touched by her words and joined the team. Not only that they got to be roommates. The trainer/coach/whatever then told Special her debut race would be the following week shocking our heroine.

Symboli Rudolph. Not as close to looking like a horse as Gold Ship but she had the right hairstyle.

After a funny dream and a day of class discussing Triple Crown Winners Special was called to meet with Symboli Rudolph, a Triple Crown Winner. Like special I didn’t pay much attention to what she said. Probably motivating Special to give it her all at the academy or something like that.

The two things worth pointing out from the scene with Rudolph was the introduction of Tokai Teio, who dreams of being a Triple Crown Winner like her dearest Rudolph.

Important saying for later on in the show I imagine.

The other thing was this saying. I imagine it’ll play an important role later on.

All throughout the week Special was really nervous. The dorm girl asked Suzuka to be there for Special because where she was from she never got to make friends with other horsies. One night as Suzuka saw Special nervously adjusting her hoof shoes and asked her about her goal of becoming a Top Horse Girl.

Special explained in detail that it was a promise made to her moms. The Horse Mom who gave birth to her asked her human wife to help train Special to become a Top Horse Girl before passing away. Anyway I think Special Week’s name comes from the week she was born being a special one. 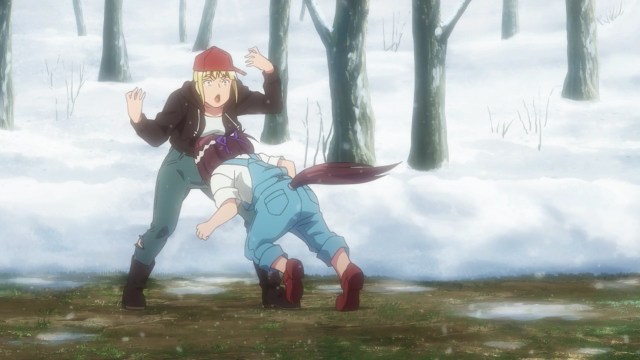 Thus human mom did what her late spouse asked of her and trained their beloved pony as best as she could, bruises and all. One day we WILL get another anime featuring a daughter raised by her lesbian moms and BOTH OF THEM BEING ALIVE! Nanoha cannot be the only one. Also #Foreshadowing again during the training montage.

Moving right along the big day had arrived and Special was still nervous. Trainer Guy asked Suzuka to give her the bib he intentionally forgot to hand her. Suzuka reminded Special of the promise she made to her moms and told her she’d be there to help her achieve that goal. Special was comforted by Suzuka’s support and her nervousness washed away.

During the race Special faced her first rival who played dirty. Thankfully Human Mom’s training paid off and she was able to use what she learned to dodge the opponent’s attacks to win her debut race.

Before the end of the episode Trainer Hana, pissed off she lost Silence Suzuka to Trainer Guy’s team most likely, to tell him she wasn’t impressed by Special Week’s victory. Trainer Guy told him to keep a close on Special from now on. 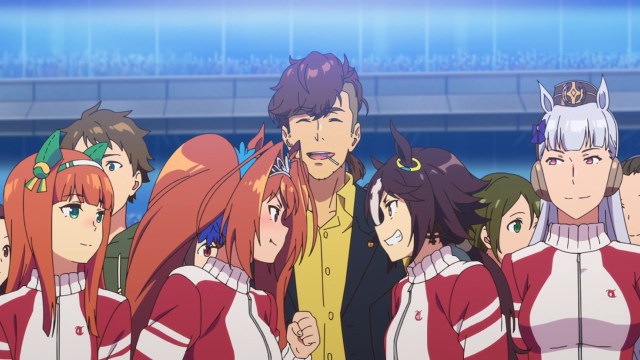 I imagine these two are a foe-yay ship.

For now these are the ships I noticed. We’ll see how many of them become OTPs or even Super Mega OTPs.

Yuri and Slice of Life are my anime passion.
View all posts by OG-Man →
This entry was posted in Episodic Anime posts and tagged Episode 1, Episode 2, Pretty Derby, Uma Musume. Bookmark the permalink.