Half of this episode was a flashback…a very important flashback.

We begin with a flashback of the Great Disaster of Sagami Bay where Yukari, Hiyori’s mom Kagari and other familiar Toji fought against the Great Aradama that terrorized the world. 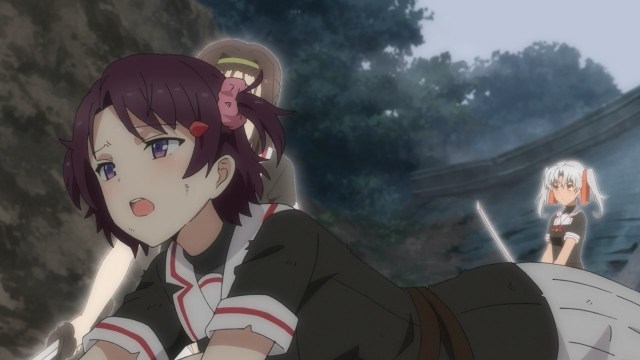 A young fangirl who would grow up to become a major pain in the neck. Also make sure to remember the gray haired twin tails girl.

It was a fierce battle as the Toji barely hung on against the large army of aradama. Yukari and Kagari went onward to face the big dog because only they could perform a ritual strong enough to seal it. The others were ordered to stay back and help the soldiers on standby. One of them didn’t feel like waiting…

Minato came along to back the two up.

Back in the present we saw that Akane Origami, sister of Yukari Origami, was telling Kanami and friends about that fateful day.

She was joined by Sana Maniwa. The aforementioned dark skinned twin tailed girl and another one of the academy teachers. She, along with the other teachers we’ve seen up till now were in that group back then. Alongside Hiyori’s mother Kagari was Kanami’s mother as well…MINATO! Those who saw this coming, congratulations. Give yourselves medals because my jaw dropped. Even Kanami didn’t know. This could mean one of two things:

After the Great Aradama, named Princess Tagitsu, was “sealed” Yukari changed completely as she rose to prominence becoming the head of the Origami Family and ordering the construction of what would later be known as the S Equipment among other things. Kagari and Minato lost their Toji powers and went on to have Hiyori and Kanami respectively.

Akane grew more suspicious of what exactly happened during the ritual. She secretly researched the sealing ritual and found out that it required a Toji sacrificing herself. Said sacrificial lamb was meant to be Kagari. The technique involved using jin’i to enable the  Toji to reach “infinity” speed and drag Kagitsu down to the Netherworld. Minato didn’t like this at all and at the last minute barely pulled Kagari out. This not only removed their Toji powers but shortened their lives.

When Akane saw Yukari speaking to something lurking in the deepest shrines her suspicions were confirmed, Princess Kagitsu swapped souls with Yukari trapping the latter in the Netherworld while the former concocted a scheme spanning over two decades to restore itself back to full power. The S Equipment, advancement in technology to power up the Toji and them hunting down aradama was all part of Kagitsu’s master plan. 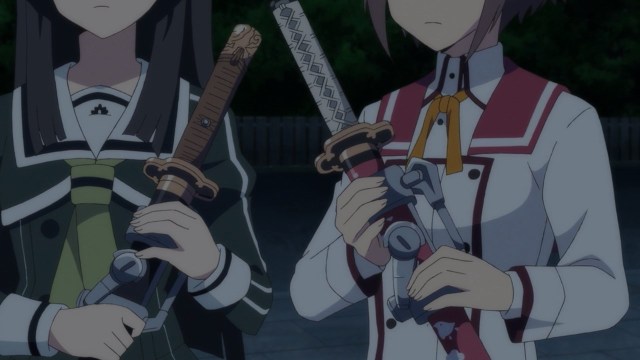 After the conversation Akane told Hiyori and Kanami that maybe this was fate. Their mothers’ teachings were passed down to them to carry on their legacies so it wasn’t all bad. Then Akane quietly looked at their okatanas wondering about a possible connection between the two.

We got a brief scene of Sayaka asking Mai what to do next because she was raisd her whole life to fight so she didn’t know anything else. Mai must protecc her while also think about her feelings for Kanami…I think. That’s what I got from the night scene.

Later in Kanami’s Dream World she told “Minato”, or at least the memory of Minato at age 17, about her recent discovery. However, every time Kanami dreams she forgets about the conversations she has with Minato upon waking up. The bright side is her body memorizes all the techniques Dream Mama teaches her.

The ampoule is alive.

After some team training from Sana’s veteran students and a discussion with Grandpa Friedman about the technology and its overall purpose to further “Yukari”s plans Sana took the ampoule with the “aradama juice” to Osafune for further research. However, unbeknownst to them the juice was alive and it informed the big dog of Akane’s location…

The show’s been getting better and better since the first fight with the Elite Toji.

Yuri and Slice of Life are my anime passion.
View all posts by OG-Man →
This entry was posted in Episodic Anime posts and tagged Episode 8, Katana Maidens, Toji no Miko. Bookmark the permalink.