The previous episode ended in a real downer so let’s find out how our adorable heroine responded to the harsh words from the person she cared about most.

We joined Hazuki talking about dropping out of the magic school and forgetting everything. Headmistress Sugimura presented her with a blue potion that would erase her memories of the school. Hazuki left the Cinderella Origin with her, which was later sealed away.

Misa’s onee-chan senses tingled sensing something bothering Hazuki, specifically her having “boyfriend” troubles. To cheer her up she invited her to a Christmas party which she initially refused but changed her mind when Misa brought up a certain blue dress,

Either Sugimura has two twin sisters or can multiply herself. Most likely the latter, which would explain how she gets around.

We joined Shizuka discussing the upcoming qualifying match with the Headmistress(es) and a suitable replacement for Hazuki. 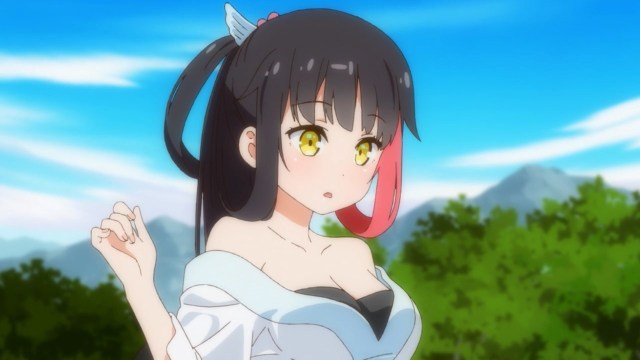 The new third member of Team Japan was Mai Sadohara whose Origin was The Grateful Crane. She seems to be a white mage. 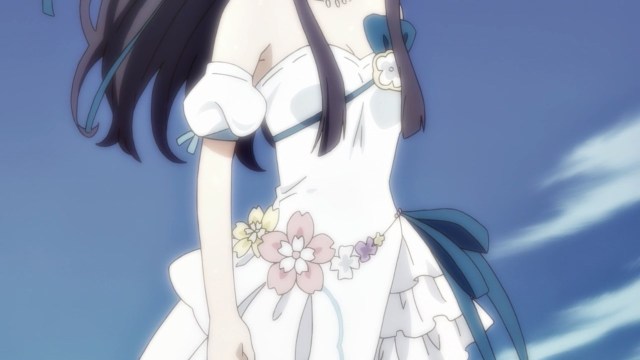 Hazuki looked up a book on ballroom parties but was called to the great library. There the Headmistress waited for her who knew Hazuki had yet to take the blue potion. Hazuki still hesitated to take it. The Headmistress then told her a story of someone close to her heart she “faintly” remembered. It was about a Maedchen whose dream was to bring peace between not only mages but Stains and Flecks. Only her closest friends knew about it for obvious reasons. She competed in the Hexennacht where she hardened her heart to stand a chance against the competition. At the end of the tournament she broke the Origin contract and disappeared, tired of all the senseless fighting. While Sugimura forgot her friend’s appearance and times they spent together she remembered her feelings for her and regretted not noticing her suffering sooner. This Maedchen was the Cinderella Origin Master before Hazuki.

The day of both the Hexennacht Qualifier and the Christmas party had arrived. While Shizuka led her team against Yumilia’s Coalition Hazuki put on her lovely dress. She still had Shizuka on her mind when her stepmom called her to check something out. It was high heels she bought for her.

When Hazuki teared up from her family’s kindness Mom told her she had an idea what was going on. Not the Magic World stuff but the…other thing. They shared a touching moment where she told Hazuki to “Do what you feel is right. We’ve got your back” basically. The bond between Hazuki and her new family leveled up from names to “Mom and Onee-chan”.

Hazuki knew her place was alongside Shizuka and ran back to the library. The Headmistress expected this to happen which was why one of her copies was there waiting for her return. After Hazuki went through the portal she revealed the “potion” was just water.

As for the brief snippets of the qualifying battle Shizuka had every intention of paying Yumilia back for what she did but the Coalition proved to be too strong for Team Japan. Suddenly a familiar ally made her return “Neptune style”. Neptunia fans will get the reference.

I predict in the next episode Hazuki will finally transform.

Yuri and Slice of Life are my anime passion.
View all posts by OG-Man →
This entry was posted in Episodic Anime posts and tagged episode 5, Maerchen Maedchen, Marchen Madchen. Bookmark the permalink.