This show is not heavy on yuri. HOWEVER, it is most certainly there. 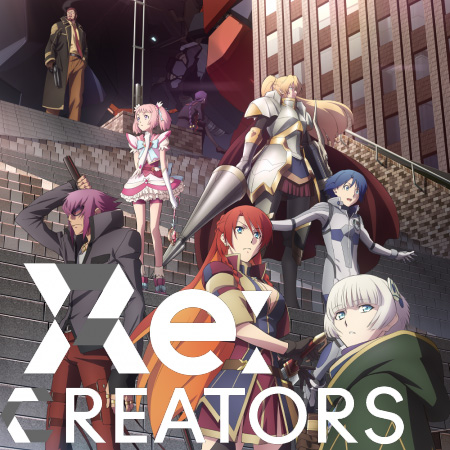 Briefly discussing what the show is about…think grounded shows that take a closer look at the behind the scenes of making an anime or game. Think something like SHIROBAKO but with a strong dose of the fantastical. It is the story of one being who somehow gained the power to travel from the “fictional” world to the human world in an effort to wreak havoc with her army of other “fictional” characters to accomplish her ultimate goal. Opposing her is another group of “fictional” characters along with their “Creators” (Animators, mangaka and game developers) and other allies in a battle to save the multi-verse…while also being a show exploring the relationship between creators and their creations. Basically “What would an animator say if they ever got to meet their creation face to face?” A lot…A HECK OF A LOT! Add in a dash of dark themes and hard hitting action spanning several genres from Gothic, fantasy to mecha and magical girl and you have some kick ass fight scenes. I brought up SHIROBAKO because, as my good friend OtakugamergirlT said in her review of the show this is a worthwhile anime to check out if one is interested in becoming a creator (anime/manga/video games/etc.). As I mentioned it deeply explores the relationships between a creator and their creations.

As I said above the yuri pairings do not get much time to snuggle but they are most certainly there and when they do get their time it is certainly worth the wait. The one couple that gets the most time is Mamika the Magical Girl and Alicetaria the defending knight of a dying world. Think a cheerful heroine who gets a reality check and a brooding heroine who learns to smile again thanks to the pink upstart. Do keep in mind this show is not all sugar and gumdrops before approaching it…Anyway, besides this pairing there are two more. The second takes a long while before it becomes clear. A hint is dropped once a huge bombshell is dropped. As for the third one…it is subtle to the max. The material for the third is so small it might be seen as a crack ship…but like the other two it is most certainly there. The hint to the pairing I am referring to is “minds“.

Had I finished the show on time it could have ended up on my Top 15 fav anime of 2017 list.

PS: Please do not spoil the identity of the 2nd pairing. It needs to be seen blind. You can share your thoughts on what transpired between the two but not what happened in detail or who they are.

Yuri and Slice of Life are my anime passion.
View all posts by OG-Man →
This entry was posted in Yuri Quickie and tagged RE;Creators, Yuri Quickie. Bookmark the permalink.