Toji no Miko Episode 2: Samurai Miko on the Run

When we last left Kanami and Hiyori they were on the run after the latter made a surprise attack on the leader of the Elite Toji Yukari. We now join them still running.

The first half is easy to explain so I won’t go into too much detail.

Hiyori was like “Dood. Why are you helping me?”

Kanami was like “Because I want us to have a good clean fight once this is all over.”

Hiyori was like “Fiiine. Do whatever you want dood.”

Unfortunately for Kanami she left all her supplies at school and unsurprisingly they’d later be confiscated. Most of them anyway.

A neat tidbit was Hiyori’s old analog spectrum meter or as I call it, and old-school aradama detector. So the duo managed to book a room at an inn. Hiyori was puzzled by Kanami not asking her the million question of “Why did you attack Yukari Origami?” to which she responded “You can tell me whenever you’re ready to share dood”.

Before that moment Kanami wanted to at least tell Mai that she’s alright and to not worry. Mai, being an intelligent rich girl with a skilled staff managed to track the location of the inn. Hiyori expected this and the two avoided detection in the nick of time, much to Mai’s dismay. 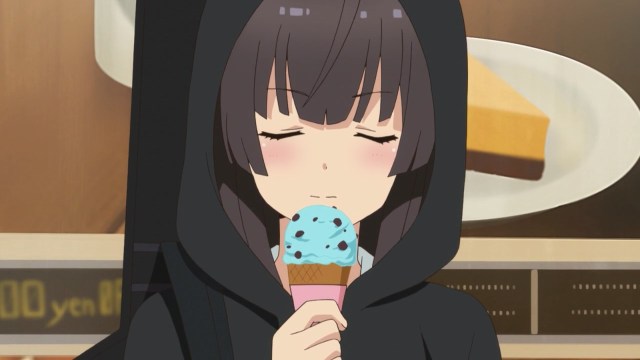 The next day our runaways tried blending in with a shopping crowd to avoid being spotted. We had an obligatory “cute moment” involving mint chocolate chip ice cream and Hiyori defending its honor.

Kanami and Hiyori fighting an aradama.

Later that day Hiyori’s aradama detector detected one nearby wreaking havoc. Hiyori was like “Let the pros handle this” while Kanami was like “Dood! We’re defenders of justice. If we walk away from this we’ll both regret it!”

Of course Mai detected the aradama as well and found our cute runaways.

Hiyori was like “Go with her Kanami. I’ll continue on my own”

Mai was like “I made a deal with our respective principals and if you both come back they’ll help lessen the punishment.”

After a cool little preview of two girls fighting over another girl Kanami stepped in:

“Hold it sweetie. I’m glad you’re fighting for me but there are bigger fish to fry…”

Hiyori elaborated that Yukari’s hiding a big secret, an aradama inside her.

I have three guesses:

Whatever the case Mai believes in her bae and lets the two go but not without one more souvenir: Some of her precious cookies and and a note “If you’re ever in trouble, call this number.” I’d like to think that’s Mai’s secret number but it’s most likely a friend of hers who can help them.

Well now. So the show went in a slightly different direction but it hasn’t yet strayed away from my prediction of Kanami and Hiyori rounding up some allies to take on the Elite Toji and it ending with a fight against Yukari and a mega-aradama final boss. Either that or the aradama will strike more often than expected. Mai being used by Yukari to fight Kanami may not happen after all. We’ll have to wait and see as the PV hints of both sides having their own troubles next time.

Yuri and Slice of Life are my anime passion.
View all posts by OG-Man →
This entry was posted in Episodic Anime posts and tagged Episode 2, Katana Maidens, Toji no Miko. Bookmark the permalink.

15 Responses to Toji no Miko Episode 2: Samurai Miko on the Run