So yes. My plan of covering more than one show per post during the Winter season will continue for as long as I want it to. The order is the same as last time, Antarctica Show, Ramen Show and Camping Show. 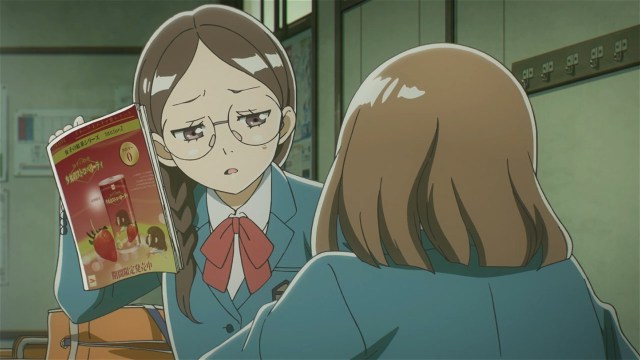 So Mari and Shirase were all set to go on their antarctic journey on December. Until then Mari had to get enough money to manage for the whole trip. She agreed to look for a part-time job but there weren’t many available for high school girls. The one Megumi and her did find wasn’t the most pleasant sounding. When Megumi asked how they’d join an expedition despite then not being old enough to join yet Mari said there would be an “open invitation” this year. Unfortunately when Megumi looked up what happened the last time there was one the reports weren’t positive.

Mari and Shirase discussing the situation.

When Mari told Shirase her concerns about the trip Shirase unfairly treated her like a quitter. Thankfully it didn’t take long at all for her to realize she reacted harshly Mari. For now Mari focused on finding a job.

Luckily for her she found a workplace that hired high school students. There she met a familiar girl named Hinata. She quickly befriended Mari and joined the party using her magnetic cheerfulness. She told her new buddies that she’d overheard their Antarctica conversation and saw them passing by the store many times and how she wanted to befriend them. She also revealed that she skipped going to high school, choosing instead to apply for college entrance exams to show slackers around the world who didn’t take advantage of their time in high school that you can do anything if you work hard for it…or something like that. Until that day came she wanted to enjoy her youth as much as possible and going on an expedition to Antarctica was a perfect adventure to go on. 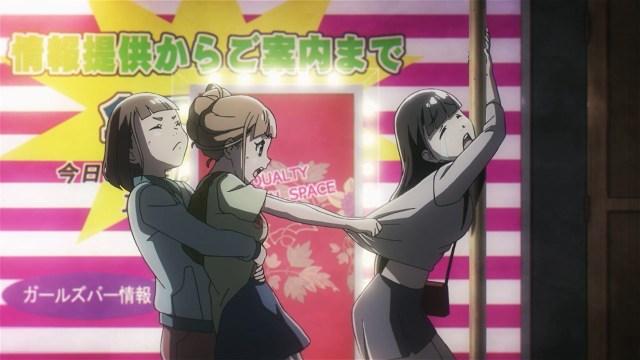 Shirase refusing to volunteer in her own plan.

So our heroines, with Shirase as the self-elected team captain, followed her plan to somehow join an expedition. That plan involved…seduction. Of course Mari and Hinata weren’t up to snuff so they…”coerced” Shirase to do it. 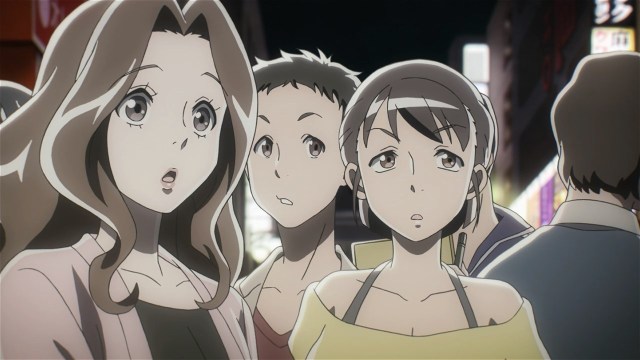 As soon as Shirase was about to give it the “ol’ college try” two gorgeous women she knew spotted her. What followed was an oh-so delicious chase. Our fun trio tried escaping the babes but they were trained professionals so their capture was inevitable. After calming down Shirase tried convincing the babes to let them join the babes’ expedition but they refused because it was too dangerous. She tried bribing them but they again didn’t want the girls to risk their lives even though they understood how badly Shirase wanted to find her mom. Also it seemed as though Mari didn’t realize the reason Shirase wanted to go to Antarctica was to find her mom who went MISSING. I thought she already explained it to her last time. Guess not.

The other reason the babes didn’t accept Shirase’s money was because they already had an equally sexy sponsor.

Back with our heroines Shirase initially seemed at a loss but was already thinking of a new plan. Unfortunately for her the others elected to dethrone her as leader and come up with another plan.

Meanwhile the soon to be fourth member of “The Antarcticuties” overheard their conversation. She also noticed them before the sexy chase. I predict she’s Miss Shiraishi’s daughter. We’ll find out next time. 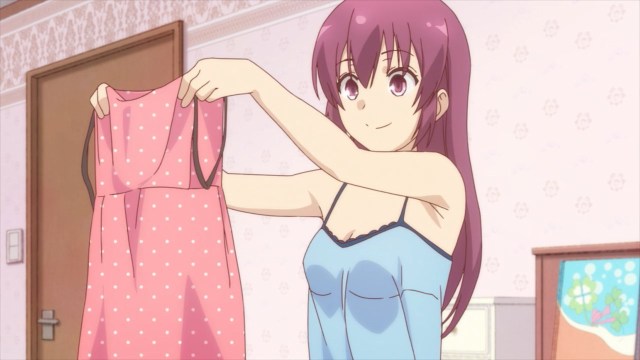 Misa preparing for a date.

Next up is Ramen Show. We’re unfortunately off to a disappointing start as the lovely Misa was getting ready for a date…with a guy. I suppose some shippers will not give up on her. I’ll wait and see what happens. Anyway the date didn’t go well due to the guy being intimidated by Misa’s super popular status and broke up with her before their relationship even began.

Misa then noticed Koizumi-san passing by and was worried she noticed her being dumped. She followed her to a spicy ramen shop…and was right about her noticing the breakup. Still, to show she wasn’t “beaten” she ordered a level 9 spicy ramen like Koizumi-san did. Koizumi-san warned her that the max spice ramen was no joke but again she refused to admit defeat.

To Misa’s credit she held her own. Koizumi-san was admittedly impressed. As if a mixture of the spiciness and the pain inside her heart Misa let out her sadness of being dumped. Still, she felt relieved after letting it all out. The two exchanged numbers as a form of mutual respect.

One more thing. Misa told Yuu earlier she couldn’t hang out because of the date. Guess who showed up exactly when the two were exchanging phone numbers… 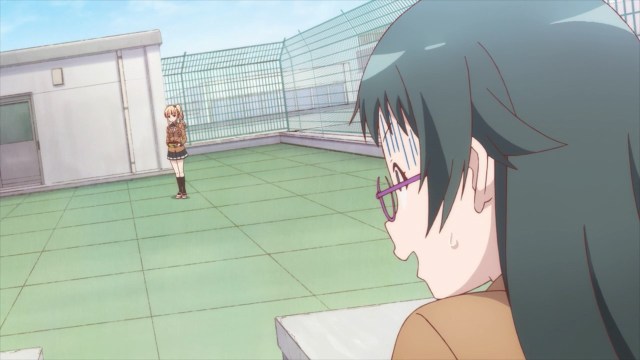 Koizumi-san walking away from Jun.

The second half focused on green hair girl Jun. Unsurprisingly she’s the 2nd smartest in the class and the class rep, much to her dismay. The big shocker was Koizumi-san scoring lower than any of our heroines in the recent exam so the teacher asked Jun to help her out. After finding Koizumi-san she explained the reason she failed was that the day prior she went on trip to try several exotic ramen and she couldn’t get back home on time due to heavy traffic. She fell asleep during the test. Jun was surprised she would go so far to taste exotic ramen like pineapple and chocolate flavored. Koizumi-san told her of a nearby pineapple ramen store. However, Jun told her she kinda didn’t like ramen. This greatly disappointed Koizumi-san and she wanted nothing to do with her. 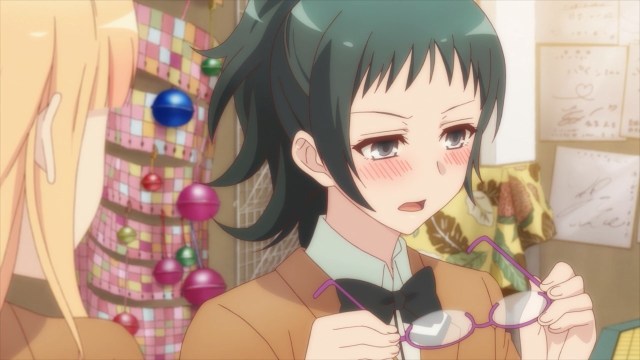 Long story short the reason Jun disliked ramen was because one time it fogged her glasses and for some reason she was made fun of for it. The two came to an understanding and exchanged numbers. Cue Yuu showing up at that exact time slot.

Lastly we have Yuru Camp. We joined Nadeshiko running towards the “Outdoor Activities Club” in hopes of joining and having fun camping like she did with Rin last time. After an amusing first meeting she was introduced to club founders Aoi (big boobs) and Chiaki (megane) the leader. Initially Chiaki didn’t want her to join because there wasn’t enough space but as soon as Aoi told her of the potential benefit of more members she quickly accepted.

I haven’t mentioned how adorable Rin is yet, have I? Well yes, Rin is kawaii.

This episode’s camping lesson was about setting up a tent. The girls had some trouble but thanks to Rin’s friend Saitou conveniently having the required item to fix the tent they successfully finished it. As for Nadeshiko and Rin’s reunion…I thought they were building it up to be something incredible but like the show itself it was pleasantly simple. Worth ten rewinds though as it was funny. 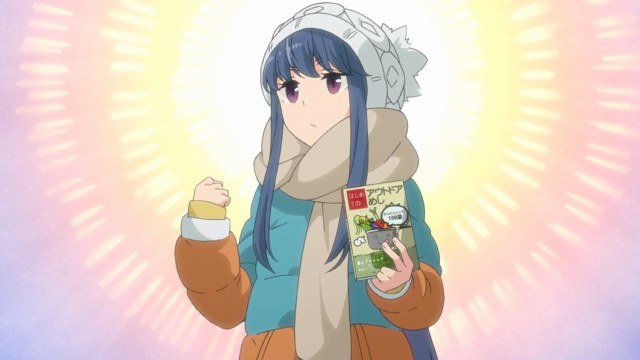 The majority of what happened next was another chill day for Rin camping though this time it looked to be a bit pricier. Still Rin pulled through and did good. While camping Rin thought back on the day she refused to join the Outside Activities Club and felt a little bad for how she handled the situation. She started hearing Nadeshiko’s voice repeatedly all of a sudden. 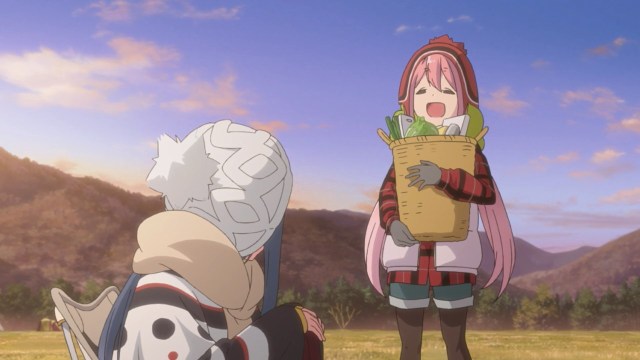 I have a crazy thought that maybe Saitou is Rin X Nadeshiko’s cupid. We’ll find out next time.

Whew. I had a lot more to say than I thought. Oh well. It was another triple dose of fun episodes.

Oh and there was also this: #Pupberg