Here we are looking at the second season of the second group in the Love Live! series of idol media. The first entry, while very enjoyable, did have its critics who felt they borrowed too much from their predecessors, which while being valid arguments was the point. Aqours tried copying μ’s road to success and it did not go well for them so they realized they had to create their own legend by following their own path to success. Join me as we take a look at how they did in Season 2 of Love Live! Sunshine!!

My review of the first season HERE.

Plot Summary: Having found the resolve to create their own legend Aqours were more determined than ever to make a name for themselves in the Love Live! tournament and save their school. However, during their training Mari received an alarming phone call from her papa that made their journey to greatness even harder than it already was… 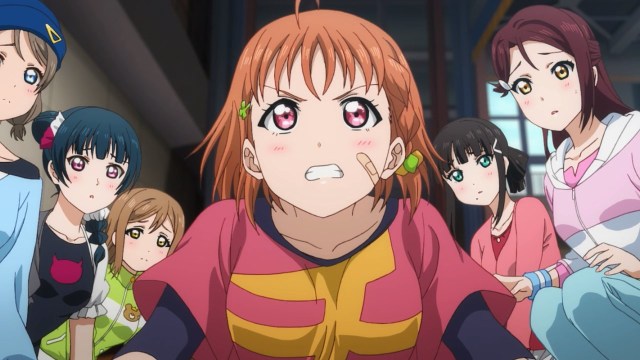 This image sums up Aqours’ journey. Hard and rigorous.

Going into this season I had two hopes:

1: Aqours would shine brighter than before and show everyone what they are truly capable of, proving once and for all they are not “clones”.

2: Further buildup for established pairings in the first season.

Let us first go over the main theme of the show, carrying the responsibilities of being the next generation. What I mean by this is that in the real world Aqours already had a difficult road ahead of them from the first start with every single challenge a new generation of stars had to go through, living up to the established legacy left by the previous one. μ’s had made Love Live! a franchise strong enough to compete with Idolm@ster and Aqours had the task of keeping the brand strong, which of course was not going to be easy…especially when facing the wrath of diehard μ’s fans refusing to give them a second thought. Though through thick and thin they persevered and established a pretty strong strong for themselves. Point of this being that this struggle is reflected stronger than ever in season 2. Let me put it this way. Viewers who thought μ’s road to stardom was a challenging one, Aqours’ was even harder, taking our new heroines in a different direction than expected. Despite the main objective being the same, without spoiling anything their road to success took a massive detour. This detour was the first step in Aqours creating their own legacy and all things considered it was the right call to make their journey more difficult than their predecessors as it helped change their perspectives and goals. The powerful and emotional moments, like last time, remain as strong as ever, possibly stronger than before because of the big change. 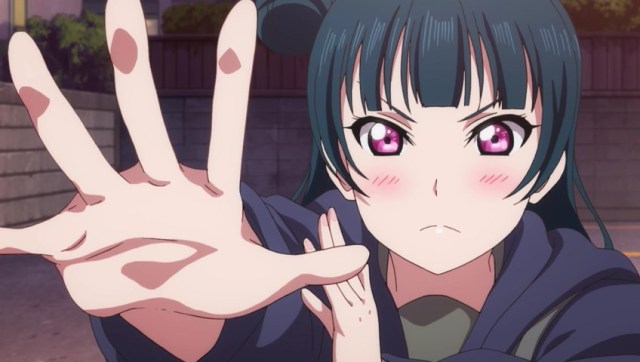 Yohane’s episode was…”controversial”(?)…I think(?). Hard to tell. I thought it was great.

On to the rest of the show’s content. Like the second season of their predecessors, Aqours’ 2nd outing focused on the members who had not yet received their proper character driven episodes such as Ruby (The one in the first season was more of a Hanamaru episode) and elaborated on ones who already got an episode but had more to tell like Yohane. Riko and You (Despite some fans feeling she got “Kotori’d” for the most part she had some bright moments in the first half of the show before getting her shine on in the 2nd) got some development by sharing the spotlight with some of the others while Chika, being the team captain, faced her greatest challenge yet. Long story short the character episodes, as far as I am concerned, were excellent…though like every idol show in existence there will be an episode or two that will make some fans want to murder kittens (I do so enjoy using unnecessary hyperbole to convey fanboy/girl rage). It all depends on personal expectations or preferences I suppose. My point being in this section of the review is these character episodes gave not only the ones in need of one but the ones who got expansions and more the opportunity to show everyone what they were really made of. Even Saint Snow eventually gets their time in the spotlight. They took it and succeeded showing once and for all that they are not μ’s clones despite borrowing the “Kotori Face” and also getting into a pillow fight…but that is like saying every Girls Club show that had a pillow fight scene ripped each other off. Oh and they too have super idol powers but that is a given for the Love Live! franchise. Keep in mind that idols are the second strongest entities in anime second only to lolis.

The performances once again deliver. Easily surpassing their outings from the first season…which is the point.

The animation is slightly better than the first season which was already pretty good. This is most notable in the oh-so excellent performances. My personal favorite being the one in the above pic. The soundtrack once again is stellar…which it has to be considering it is a show about idols. 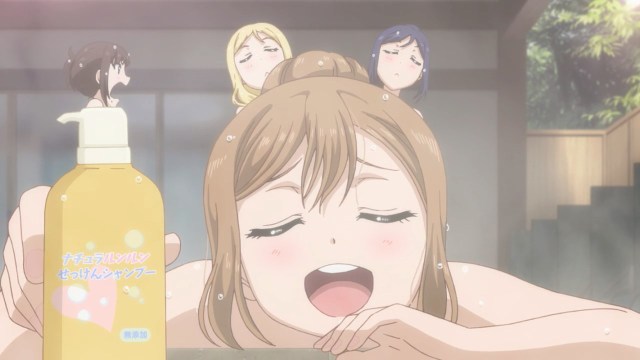 This scene was both brilliant and unfair.

The comedy also surpassed the one in the first season.

The only OTP that remained consistent.

Next up let us address the tiny elephant in the room, that being the treatment of strongly established OTPs from the first season. As it says in the above KanaMari pic they are the only couple severely unaffected by what I like to call the “mass ship pandering wave or MSPW”. What that means is the writers’ decision to pander to as many yuri ship fanbases as possible. Some more than others. I admit that this initially irritated me. The main reason being because of how well pairings were established in the first season. Each group (1st, 2nd and 3rd years) had their Super Mega OTP, though the 2nd years for all intents and purposes are a polyamory. However, the writers went the MSPW route and featured as many OTPs based on other Aqours media outside of the anime continuity, specifically the music videos/insert songs from the separate trios, which made the strong build from season 1 for all the Super Mega OTPs but KanaMari feel kind of pointless. I initially thought about deducting points from my overall enjoyment because of this…but then I thought twice and realized…this was more of an annoyance than a legitimate cause for fuming rage. It was what it was and when the season came to an end I realized there was too much I enjoyed about this season to let such annoyances affect my overall enjoyment. I also realized that when I watch the series a second time it will not irritate me as much because…well it is part of the Love Live! machine. The bigwigs realize yuri shipping is a strong part of the franchise’s appeal so…why not give as many shippers as possible their “OMG! SQUEE!” moments. In short, it is what it is. At least we got KanaMari consistently intact so it was not all intentionally botched.

Overall one and a half of my two hopes were fulfilled. Aqours did exactly what I hoped and shined brighter than before making me love this group even more than I already did. So many great moments that made me laugh, cheer and feel the highs and lows of our lovable heroines as they worked their butts off overcoming personal obstacles and facing the unexpected “mega detour” on their journey to create their own legend. Fans of Aqours’ first season will certainly find plenty to enjoy in this one and ones who stuck around hoping they would improve from their first outing will most likely get what they hoped for. While I was personally annoyed by the “mass ship pandering wave” at first it ultimately did not affect my overall enjoyment. Sunshine 2 was awesome, Aqours are awesome and I am super pumped for the upcoming movie in (most likely) Summer 2018!