Were it not for a fan of mine drawing my attention to this anime then it may have slipped my radar until it got big…meaning I may have picked this show up eventually but thankfully I jumped in early. Question is whether it was worth following to the very end. Let us find out as we take a look at Houseki no Kuni.

Notes before contemplating picking this show up or reading the review:

Plot Summary: In the distant future, a new immortal and androgynous/genderless life form called Gems (Jewel People) populate the Earth. The 28 Gems must fight against the Lunarians (Moon Dwellers), who attack them regularly to abduct them and to turn them into decorations. Each Gem is assigned a role, such as a fighter or a medic.

The story follows Phos (Phosphophyllite), one of the youngest and weakest in terms of “hardness”. Annoyed by this Phos consistently sought to be a fighter so they could be of use/have a purpose. Unfortunately they were not strong enough to put up much of a fight so the Gems’ master/father figure Master Kongo (Adamantine) assigned them to write a natural history encyclopedia of the world around them.

Master Kongo (Adamantine) and most of the 28 Gems.

Let us first go over the presentation where we discuss the main selling point of the show, the character designs and the animation, though as mentioned above these are ironically the same reasons some would turn away from it. Each Gem has very shiny hair with colors based on their respective gem like amethyst being purple, Cinnabar being fiery red, Jade being dark green and watermelon tourmaline being bright green with a pinch of watermelon pink on top to name a few examples. As far as the Gems’ uniforms go I have no issue with them especially during booty shots.

The Lunarians. The Gems’ main foes.

Even the Lunarians are a sight to behold with their dazzling designs and varied forms though the most common are the archer types with their headhunters leading the troops. Keep your eyes peeled for other very interesting sights while watching.

The battles between the Gems and the Lunarians are pretty awesome.

This leads me to discussing the animation. I stand by the following statement that HnK/LotL has some of, if not the BEST looking TV anime computer animation I have ever seen. It starts off straightforward when the Gems are moving about doing their thing…but as soon as the Lunarians attack or the Gems are required to run and/or leap…prepare to be left in awe. Now do not expect anything close to Pixar quality but again as far as CG TV anime goes this is top tier stuff. The soundtrack is also very fitting of the show with some familiar Japanese sounding tunes here and there, some “iyashikei” worthy calm tunes and heart-pounding intense beats. The OP and ED are both solid.

With the presentation done let us go over the show as a whole. It is one part world-building and one part combating emptiness and loneliness. The world itself reminds me of the “Land of the Colossi” from Shadow of the Colossus. It is very beautiful and chock full of mystery and wonder viewers will uncover along with Phos. In each episode viewers learned more about the nature of the world in its current state after many millennia and the Gems themselves, specifically how their bodies work, what they do based on their assigned roles and how they interact with themselves and other creatures. Alongside the world building there is also the Gems, especially Phos, dealing with a sense of emptiness and loneliness. Phos, for example, started off having nothing they could do due to their frailty and thus began their long, perilous and painful quest to find a purpose by any means necessary. Said quest has many times where Phos would wonder if there was a point to it all despite having given themselves reasons to reach a set goal. Other Gems, while being stronger than Phos, also have similar voids they strive to overcome. It is this intriguing battle against an inexplicably inescapable emptiness that greatly intrigued me, seeing the Gems find different ways to combat the emptiness inside and out. Now the main story itself is not so complicated, meaning the meat of the story is Phos and some other Gems’ struggles. Put simply this show is ripe with editorial writing material. In fact I will share some interesting ones down below that go in-depth into the exploration of the emotional battle of the Gems to find meaning and a sense of belonging…when not fighting for their lives against Lunarians of course. 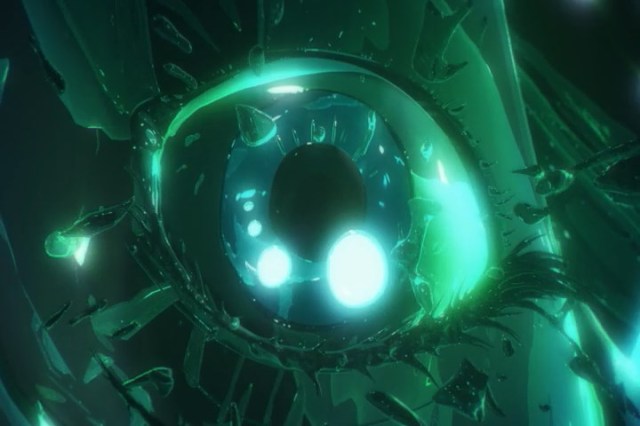 As mentioned above expect to see Phos and other Gems get shattered…often.

While there is no bloodshed at all on the show this gave the mangaka and animators to depict various brutal beat downs. Expect to see the Gems lose their limbs, get their eyes torn from their sockets, their faces smashed/crushed or simply get shattered to many pieces very often throughout the show. Like I said this show is not for the sensitive.

As far as the cast goes do not be surprised that with over twenty Gems and more some of them do not get much screen time like the aforementioned Watermelon Tourmaline. The Gems who do get enough time in the spotlight are all interesting and entertaining. 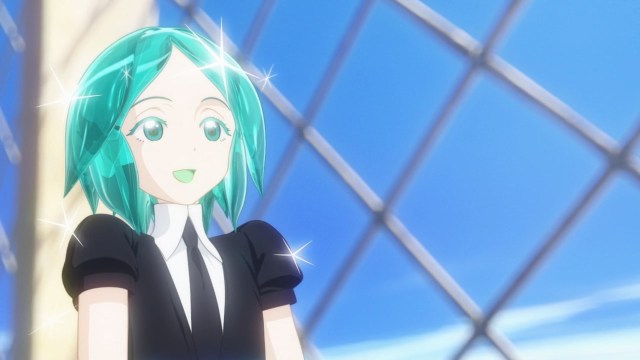 Before getting to the main event let us briefly talk about the lead Gem Phos. They are a fast-talker Skywalker with lots of sass. At first glance one would think Phos would be the classic Shounen archetype who starts off weak but quickly becomes a powerhouse…no. Not exactly. Can they at least take on the small fry initially? No. Like I said their journey is a hard and perilous one where the amount of change they experience is astronomical.

Now on to the main event. As mentioned above most of the Gems are androgynous with a select few like Master Kongo having defined genders. The 28 Gems are all technically “genderless” though most of them look close enough to be female while one or two are kind of bishounen in appearance but still feminine. HOWEVER, it still counts as yuri, or yaoi depending on the viewer because neither side is wrong. Basically Phos X Cinnabar (the driving force of Phos’ journey for the most part) and Dia X Bort are Yuri OTPs no problem. There are other pairings among the Gems but those two are the highlights and both are equally interesting to see develop.

My one gripe with the show that kept it from being a 10/10 was the “season finale”. So I initially referred to the finale as “manga-lure-y” but I was corrected in that it was more of a cliffhanger. Even so my point stands. THIS SHOW NEEDS A SECOND SEASON!

Overall Houseki no Kuni is a very interesting and engaging show whose appeal is difficult to explain but should it grab a viewer’s interest then there is a chance they will see a show with somewhat familiar ideas here and the execution is original. Think of this show as a “Slice of Life written by Yoko Taro”…if that makes any sense. The Japanese TV computer animation is some of/if not the best by far, the battles are top notch thanks to the stellar presentation, the cast (the ones that get enough screen time) are all delightful and interesting, the main plot is not hard to follow but the world-building and character development has many layers. Apart from the cliffhanger finale this was one of my top shows of not only Fall 2017 but 2017 as a whole. PLEASE GIVE US A 2ND SEASON!

Here are the editorials I promised to share that go into more detail on the show’s themes. Spoiler Warning!

Yuri and Slice of Life are my anime passion.
View all posts by OG-Man →
This entry was posted in G-Views and tagged action, drama, fantasy, Houseki no Kuni, Land of the Lustrous, mystery, sci-fi, science fiction. Bookmark the permalink.