It is that time again where we take a look at Ebi-Hime‘s latest Yuri title about a romance between maids set in mid-19th century England. Not only that but this is her team’s first 18+ title. Did Princess Shrimp deliver yet again or had her streak of wonderful yuri tales come to an end? Let us find out as we take a look at Blackberry Honey. 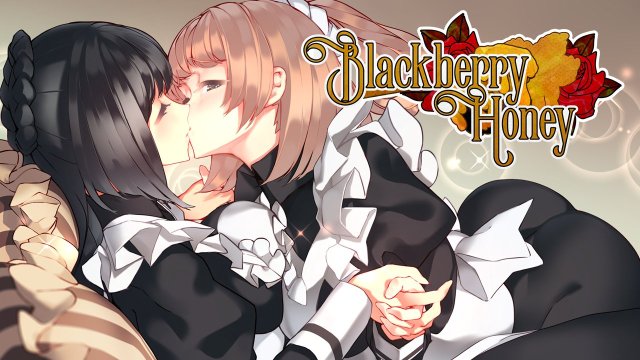 Set in England during the mid-19th century, Blackberry Honey is a tale about maids, music, and unexpected romance.

The story begins when our heroine, Lorina Waugh, is fired from her previous position as a maid in the stately home of Hartwell. With a large family back in Liverpool to support and a string of unsavoury comments circulating about her rather sudden dismissal, Lorina’s search for a new place of employment leads her to Bly.

Forced to work for fourteen hours a day, with little chance to rest, Lorina is bullied by the senior maids and, most embarrassingly of all, by the twelve-year-old daughter of the Lennard family, Lady Constance.

One of the only maids who deigns to speak to Lorina is the mysterious Taohua – but Lorina wishes she wouldn’t. Despite her lowly status, Taohua has her own private bedroom, never goes to church with the rest of the servants, and rarely interacts with anybody. Her aloof, almost cat-like personality, coupled with her peculiar complexion, eyes, and name, have inspired more than a few rumours around the Shropshire countryside that she might be a witch.

Lorina knows she should keep her distance from Taohua, and she wants to most desperately… but maybe there’s a pinch of truth to all the rumours, because she soon finds herself under the older woman’s spell. 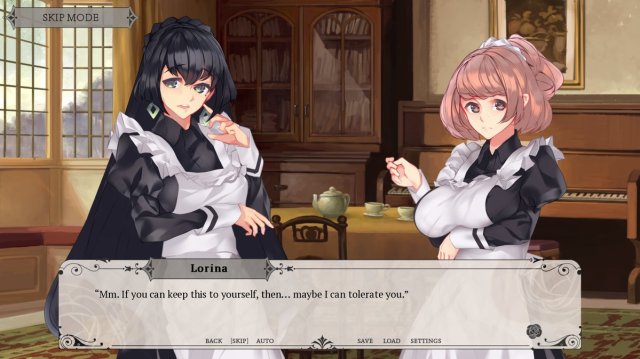 The leading ladies Lorina and the mysterious parlour maid Taohua.

This is a tale with its fair share of cute and funny moments here and there but at its core is a dramatic tale of a maid haunted by a past event working her butt off at a new mansion and putting up with emotional, verbal and sometimes physical abuse from manipulative maids and the worst kind of child character: A rich, self-entitled, self-absorbed spoiled brat. Luckily for Lorina she does have allies who help make her life in the small village less miserable. Most of them are delightfully odd and follow familiar anime archetypes like the “cheerful foreigner” and the “silent enigma”. I will briefly go over the major players in a bit.

Like all Ebi-Hime’s titles the backgrounds are all very well done with the ones in this game, appropriately enough, being more…”English/British” than past titles Asphyxia and Emmeline Burns. What I mean by this is that while “plreading” (play-read) the story I got a much stronger English/British vibe than past Ebi titles set in a British locale. As I said they all look great. I especially enjoyed the added panning effect showing more of a location be it the grasslands of Shropshire, the hallways of the Bly mansion or even a person. As far as character designs go, specifically the leads, I admit it took me a couple of seconds to get used to the eyes. As far as Lorina’s…assets go, she was intentionally drawn that way as they do play a role in some parts of the story and were not drawn that way just to make the steamy love scenes steamier. The other characters are all well drawn as expected from an Ebi-Hime title. The soundtrack fits the motif perfectly with some original scores and remixes of the main theme song without lyrics. Surprisingly my favorite tune is Lady Constance’s theme because of how hilariously “hoity-toity” it sounds, making her scenes more tolerable because of how very fitting the theme is.

Besides the vintage awesomeness of Ebi’s productions there is also the references to European literature, authors and even plays/operas. Some of them being part of characters’ character and motivation for the interested to check out the mentioned works sometime for good quality reading or viewing. Make sure to check out the “Notes”, “Gallery” sections in the menu for more references and inspirational material. 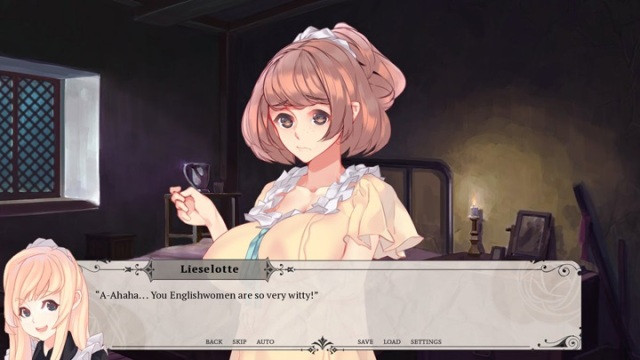 As mentioned above the cast Lorina meets during her life as a maid at Bly can be split between vindictive jerks such as Pauline the older maid and her “Yes ma’am” sidekick and lovable goofball allies like the Swiss cutie Lieselotte, her shy friend Ada and the silent enigma Effie. Side-characters are presented in three ways: 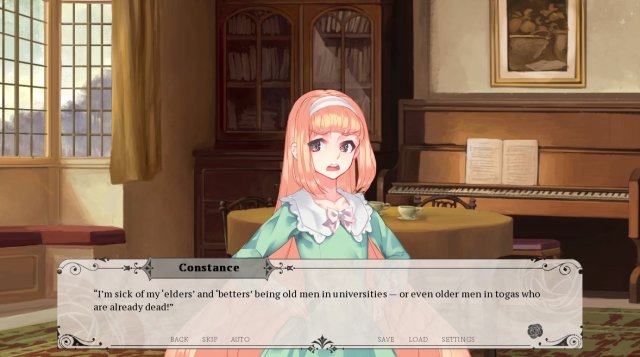 The main antagonist, or at least the biggest threat in the story, Lady Constance.

But none of the jerks compare to the meanest of them all, the twelve year old terror known as Lady Constance who, as I described above is a rich, self-centered, self-absorbed spoiled brat. Despite coming off as borderline evil Lady Constance is more of a “love to hate” character. Along with her delightful theme song there is also an inexplicably amusing charm beneath her wickedness, haughtiness and self-entitlement. Perhaps it is her dedication to being both an elegant little miss and extra cruel at the same time. However, as is to be expected there is much more to this shiny little turd than simply being a turd. Basically there is a source to her wickedness, though she was a spoiled brat long before she had become a terror. 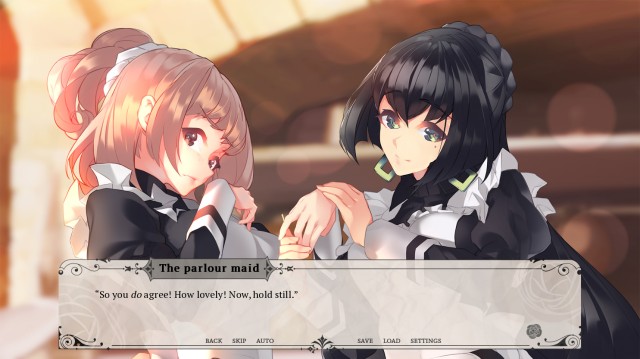 Unsurprisingly the CGs, both the charming and naughty ones, are excellent.

Now for the leading ladies. Lorina is a very kind woman but is not a pushover and will stand up for herself when possible. Unfortunately her temper does get her into trouble on several occasions. Still, considering her work environment it is understandable why she would lose her cool on occasion. When not working, putting up with the meanies’ manipulations or mingling with her allies she spends her time trying to figure out the mysterious older beauty Taohua, the numerous secrets she has hidden and why she cannot seem to get her out of her head. Other struggles she faces include the determination to put up with all the crap that gets in her way for the sake of her family’s financial stability, social status issues (specifically between master and servant) and putting her religious beliefs to the test, specifically trying to come to an understanding on GOD’s teachings, the way the local pastor educates the words of the Bible to the masses and of course her growing feelings towards a certain someone.

Meanwhile Taohua is a Smart Alleck beauty from a later revealed origin who does not taking orders or crap from anyone yet shows some kindness, especially for Lorina, has a cynical worldview, is brutally honest and tough as an iron wall yet gentle to the touch to those she shows a small bit of friendliness towards. Because of her “enigmatic” approach her good intentions are initially difficult for young Lorina to perceive as kind. Of course as time passes the two slowly start understanding each other and accept their differences becoming something more one step at a time. Even so both ladies are keeping many deep secrets and the question is whether both trust each other enough to reveal them.

It should come as no surprise that the best part of the novel is the developing relationship between Lorina and Taohua. Nothing is rushed and no punches are held back during heavy hitting scenes and whereas the sweet scenes are quite touching…as far as a gentle cynic and a kind yet short tempered duo go. 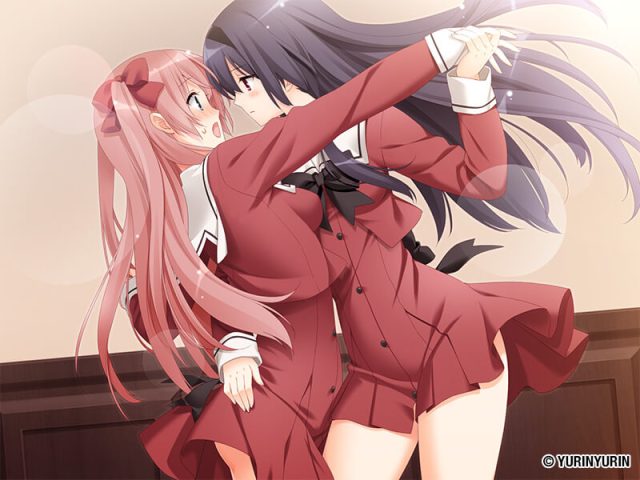 In fact. Lorina and Taohua’s dynamic kind of reminds me or Risa and Miya from the A Kiss for the Petals series. They have a similar dynamic but with many more layers shall we say.

As for the love scenes…they get steamier and steamier the more comfortable Lorina and Taohua become with one another. As I said in the graphics and sound section of the review the 18+ CGs are well drawn and the love scenes well written. Be warned the ladies hold nothing back verbally.

One very minor nitpick is some of the side-characters do not get much of an epilogue. The bright side is it is not difficult to piece together what may have happened to them after the events of Lorina and Taohua’s story.

Overall Blackberry Honey, in my mind, overthrew Strawberry Vinegar as Ebi’s best Yuri work by far. For Ebi-Hime’s 18+ Yuri title it is a great one. Lorina and Taohua’s story is a fun and also very emotional one, the allies are delightfully odd, the jerks do a good job of being detestable jerks, the graphics and sound are great and it is overall a decently length title for its asking price as far as Kinetic Novels go. Highly recommended to fans of Ebi-Hime and her team’s work along with people looking for an interesting, intriguing and touching love story set in Victorian Era England.

PS: In the Steam version I noticed the Achievements stopped working at some point during my playthrough. Not that they are necessary to enjoy the game but some others have reported this issue so keep it in mind.

Get the game on Steam, Denpasoft (NSFW) or itch.io

Note from Ebi on the Adult Patch for the Steam and itch.io versions:

The adult patch can be downloaded for free here or here. If you want to patch the all ages version of the game, you just download this file, drop it into the ‘game’ folder inside Blackberry Honey, and rewrite the existing adult patch with the new, bigger one. You’ll know if the game has been patched correctly because the window title will change to Blackberry Honey (18+).