Let’s quickly go over episode 5 and then go directly to episode 6.

Episode 5 had three parts. The first part had Chito and Yuuri look for shelter while discussing the city infrastructure and what the definition of a home was, rather what a home meant to them. The two brought up their vic as a candidate for a home. They then found an apartment and fantasized about all the furniture and decor their perfect apartment would have and how they’d love to live the rest of their lives getting by and then going home and enjoy the sanctity of their little paradise. Hopefully one day they’ll be able to create their dream home together. 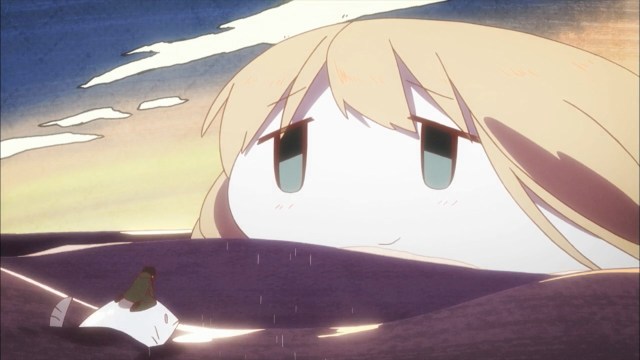 The second part had our heroines nearly getting into a disastrous accident due to lack of sleep the night prior so they took a nap. What followed was an enjoyable bizarre dream by Chito that always had Yuuri as the antagonist. There may have been other meanings behind Yuuri’s appearance in the dream besides Chito reflecting how annoying Yuuri can be to her at times. The one thing to take away from the dream was Chito’s wish to have been able to show her (most likely) deceased grandfather a beautiful sight like the ocean.

Rainy Melody shelter. Dunno what the shape of the cave was referencing, if anything.

The third part references a comment Chito made a couple episodes ago about there being plenty to see still in this post-apocalyptic world they were in. The melody created that combined the rain and several metallic items laying around was an example of such. The insert ED here was really good.

Episode 6 was all about a lovely woman our heroines met. The two were stranded because their vic, later revealed to be a Kettenkrad (I’m not a military otaku nor did I look up what the vehicle was called before this episode), had broken down. Chito slowly lost hope while Yuuri handled the situation the way one would expect from her. Suddenly a remote control airplane flew by and the woman controlling it. She introduced herself as Ishii and offered to fix the Kettenkrad if they helped her with something in return.

In return for fixing their vic our heroines had to help Ishii finish building an airplane she’d been working on for years. She had the blueprints so she figured “Let’s do it”. The main reason she wanted to finish the plane though was to escape the city and fly at least 2000 KMs to the West (I think) to another city she might have seen beyond the horizon. She didn’t want to spend the rest of her life cooped up in the hangar before the limited rations she had left ran out. Basically she didn’t want to die there. This desire to escape the city and the eventual death that awaited those who stayed made Chito think really hard about the meaning behind their journey and whether it really was all hopeless. Yuuri again reacted as one would expect from her. Oh and our heroines briefly brought up the fact that despite it being humanity’s fault the city they live in in ruins nearly devoid of life, people like Ishii and Kazoku showed them that there are good people in this world. 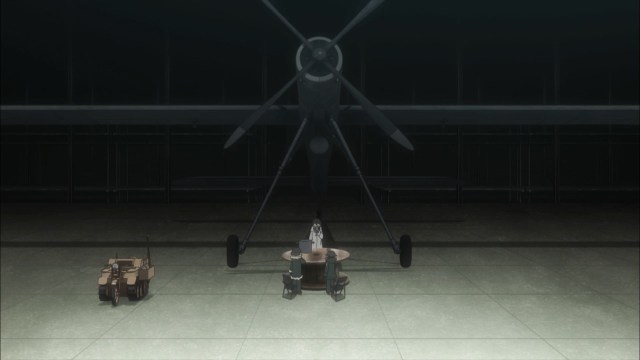 I don’t want to give away how the flight went but let’s just say it went from predictable, surprising, back to predictable and then profound. It makes more sense seeing what happened.

This show, like Konohana Kitan, continues being a sleeper hit of the Fall season.

Yuri and Slice of Life are my anime passion.
View all posts by OG-Man →
This entry was posted in Episodic Anime posts and tagged episode 5, Episode 6, Girls' Last Tour. Bookmark the permalink.