Before we begin the review let us get the obvious out of the way first. This is an ECCHIMANIA show, meaning a lot of sexy anime babes fighting each other, often getting into naughty predicaments, their clothing shredded and showing off their magnificence to viewers, especially in the uncensored version. This of course means that readers turned off by these kinds of shows will not find anything that will change their minds in this one.

Everyone else who either enjoy or are not bothered by ECCHIMANIA shows can join me as we take a look at sin: Nanatsu no Taizai.

Plot Summary: The prideful archangel Lucifer disobeys God and is cast into the lowest level of hell as a fallen angel. On her way to hell, Lucifer happens to meet a high school girl on Earth named Maria, who helps her. In hell, Lucifer meets Leviathan, and Leviathan explains to Lucifer about The Seven Deadly Sins, the seven demon king rulers of hell. After The Seven Deadly Sins seal Lucifer’s powers, Lucifer goes on a journey with Maria and Leviathan to defeat them. 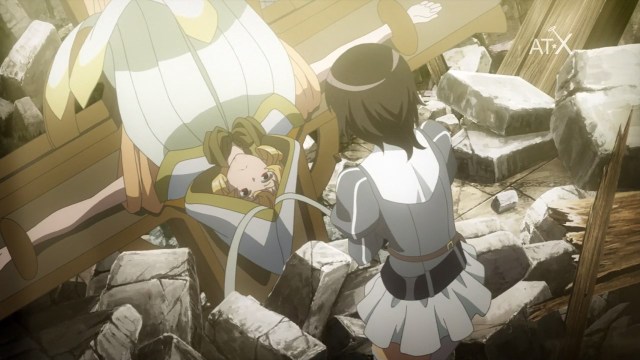 When Maria and Lucifer first met.

After the premiere episode I predicted the show would be a triple hybrid of Valkyrie Drive Mermaid, Akuma no Riddle and Dante’s Inferno. That is what we got but not to the extremes of my initial prediction.

Like Akuma no Riddle the show is about Lucifer, Maria (who gets dragged along) and Leviathan going after the other Demon Lords and beating them so that Lucifer can take the throne as the leader. Now the interesting thing about this is that while a few of the Demon Lords challenge Lucifer to an intense battle, the majority have other kinds of challenges for the heroines that do not involve massive loss of blood, though other kinds of juices occasionally start dripping. Basically most of the battles have our heroines rely on their wits, intellect, charisma and even charms instead of their brawn. That being said, when bloodshed is the only answer expect some pretty cool brawls, especially in the last quarter of the show.

Next up is the Dante’s Inferno element of the show. This is presented in the form of both the Demon Lords and even the Netherworld. The Demon Lords’ personalities are based on the sin they represent such as Lust being extra seductive and horny and Gluttony being a bottomless pit. However, they are not all solely defined by the sin they rule over. Greed for example, her greed is not as simple as it may seem at first glance. This brings us to another interesting part of the show tied to the battles: Confronting all the sins and finding ways to explain how they are not all exactly condemning. One early example is Lust, the first Demon Lord our heroines face on their journey. The question of whether lust is a sin so bad one deserves condemnation for it is brought up. The same goes for the other sins. It is not incredibly but this is an example of the show at least giving viewers a few things to think a bit about in regards to what is right and wrong. It is a neat addition and fits the theme the show is going for in regards to exploring human emotions and rectitude. As far as the Netherworld aspect of Dante’s Inferno goes, while most of the battles against the Demon Lords take place around the world, our heroines do eventually venture down to the chaotic abyss and all its horror. A neat little addition is how most of the Demon Lords are named after either several of the Devil’s known names or some of the most infamous of the Netherworld’s denizens. Nice touch.

The animation is delightful when it comes to the ladies. Sometimes a bit too bright but eh, nothing game breaking as the uncensored broadcast was not tarnished by it. I assume this will be rectified in the Blu-Ray. The OP and ED are solid while the soundtrack did its job.

Leading ladies from left to right: Leviathan, Maria and Lucifer.

When it comes to the Demon Lords they all do a good job filling their roles and for some being more than the viewer would expect. As far as the main trio go:

-Lucifer is a no-nonsense badass who oozes with confidence talks down to her opponents and refuses to go down without a hard fought battle. She becomes the Demon Lord of Pride after all. While she is very strict she is not devoid of mercy when the need calls for it. As the show progresses viewers find out there is more to her than she lets on.

-Leviathan, Levi for short, is known for three things:

Leviathan falls madly in love with Lucifer and does everything possible to get “senpai (onee-sama in Lucifer’s case) to notice her”…Unfortunately she has one disadvantage, being a “jobber” for the most part. Rightfully the best girl for many who picked up the show but her jobbing a lot is sad to watch. The bright side though for both her love life and battle prowess is exactly what one would expect when it comes to important jobber characters.

-Maria is a human who got dragged along with Lucifer and Leviathan and unsurprisingly has a hard time when going up against the Demon Lords. Fortunately, like Akuma no Riddle’s Haru, she is not useless. Despite not being a powerhouse at all several of Lucifer’s victories were thanks in HUGE PART to Maria. Also she is my #1 sexiest girl on the show with Satan in 2nd. Cannot decide between Leviathan and Maria on which one is best girl.

As far as the Valkyrie Drive elements go, as one would expect there is as much plot on the show as there is “plot” with most of the ladies getting time to bless viewers with their magnificence while a select few have us waiting for that moment. The show certainly delivers in its “plot” as is expected of an ECCHIMANIA show. However, the yuri…while most definitely there was not as intense as I thought it would be. Oh certainly there are several steamy scenes but not it did not go as far as Valkyrie Drive. Whether this is a good or bad depends on the viewer. Expect steamy yuri goodness but not as much as in Valkyrie Drive. I would say more than Ikkitousen, Queen’s Blade and Koihime Musou. As far as couples go, besides Leviathan’s undying love for Lucifer there is more to be found.

Overall sin: Nanatsu no Taizai is a pretty good ECCHIMANIA show. Of course it is not for everyone but readers who enjoy or do not mind these kinds of shows may find something to like. While it is not as yurirrific or action-packed as I initially predicted it is both interesting and creative in several places. Whether viewers will enjoy or appreciate this stuff as much as I is up to them.

PS: The series’ future is unknown due to the studio that picked it up, Artland having closed its doors. I can hope another studio picks it up for a continuation but that is highly unlikely…

Yuri and Slice of Life are my anime passion.
View all posts by OG-Man →
This entry was posted in G-Views and tagged action, Demon Girl, ecchi, Seven Mortal Sins, sin: Nanatsu no Taizai, supernatural, Yuri. Bookmark the permalink.