A girl’s band show that takes some familiar steps seen in other similar shows. Question is what it did with the familiar tropes. Let us find out as we take a look at BanG Dream!

Plot Summary: The series revolves around Kasumi Toyama, a high school student with a happy-go-lucky personality. She is initially excited that she got admitted into a prestigious high school. But in reality, she is actually looking for the “Star Beat”, a sparkling and exciting sound which she heard while looking up at the night sky during her childhood days. Ever since then, she is constantly searching for something that will stir her spirits up.

One day, while returning from school, she comes across a pawn shop owned by one of her classmates. In the storage area, she finds a strange star-shaped guitar with glittery stickers on it. Without knowing, she immediately decides to form a band after witnessing the performance of “Glitter * Green” at a live house.

Tae (aka O-Tae) and Kasumi.

The best way to describe BanG Dream!’s animated debut as a whole is an origin story: How the band got together essentially. As mentioned in the introduction this show has elements/tropes to other shows with similar premises shows such as Love Live! Some of the character arcs will seem very familiar to viewers and this could irk some of them. While not a ripoff by any means there are times throughout the show that viewers who have seen any of the two Love Live! entries in particular will tell themselves, “I have seen this before”. Again whether this is a good or bad thing depends on the viewer. 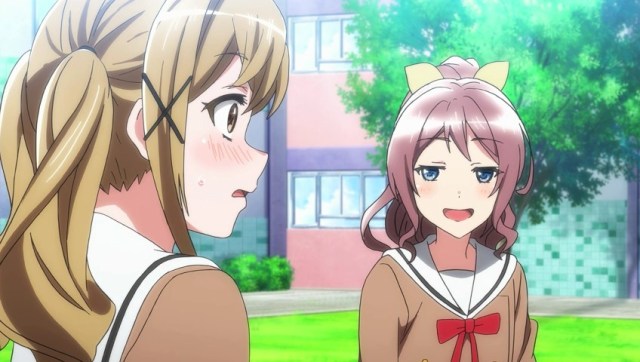 Despite the familiarity in several aspects, BanG Dream! manages take the familiar and still make it really fun to watch for people who enjoy Girls Club shows and especially girls bands shows. Both the humorous and dramatic parts are well done as the five main girls fall under familiar anime girl archetypes:

The character development arcs for each girl is also nicely done. Some are again familiar while others such as Saya’s brought something different to the mix. The drama is effective and does not overstay its welcome. 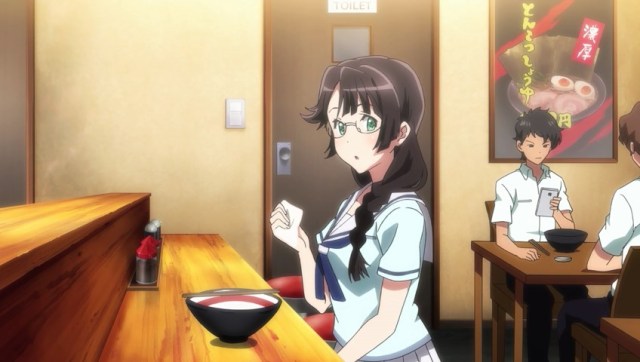 The class representative. My favorite side-character.

This is another one of those shows that has a large cast but because the show mainly focuses on the five main girls they do not get much screen time. On the bright side most of said girls leave a good impression where viewers want to see more of them in the future (If the show has one). This being an origin story at its core the show does leave a few, actually one side-character in particular with her subplot unresolved. Personally this character’s subplot is not interesting so it is not a big loss.

All the girls performing in CG.

The animation has an odd start in the first two (maybe three) episodes. I cannot quite describe what the initial issue is but watching the first couple of episodes it felt like the show skipped a lot or felt edited: The transition does not quite feel right at first. It is not a deal breaker by any means but very noticeable early on. After the second or maybe third episode the odd transitions disappear. As far as the overall animation goes it gets the job done. Like some other idol or girl band shows there is CG during performances. It is nothing new and unless this is the first idol or girl band show the viewer has picked up it should not be a major issue for veterans as they are used to it. Besides, it is not bad at all. The soundtrack and songs are also enjoyable. I like the OP most of all. 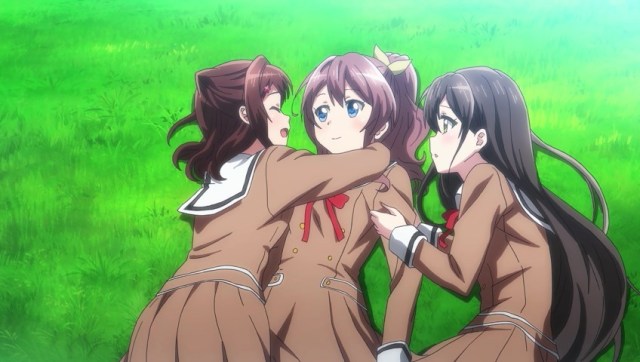 Kasumi using her yuri harem power on Saya while O-Tae helps out with comforting.

Besides Kasumi’s yuri harem power some of the other girls also have a craving for female flesh, especially one named Hina. The shipping material is solid in this one.

Overall BanG Dream is a good origin story that borrows several familiar plot elements used in other idol or girl band shows but it does a good job with what it is given to not be a major issue. The show’s enjoyment heavily depends on how accepting the viewer is of the “I’ve seen this before” moments and the not-so familiar stuff. Personally I think this series has the potential to be more than a glorified commercial for a mobile game and hopefully we will get more in the future.

PS: After watching this show viewers will either love Twinkle Twinkle Little Star more or never, ever want to hear it again.

Yuri and Slice of Life are my anime passion.
View all posts by OG-Man →
This entry was posted in G-Views and tagged Bands, BanG Dream, comedy, drama, music, school, school life. Bookmark the permalink.