Another Razzmatazz title. Cool. There is a small catch with this one though. Find out what it is in Razzart Visual’s newest title, Happy Campers. 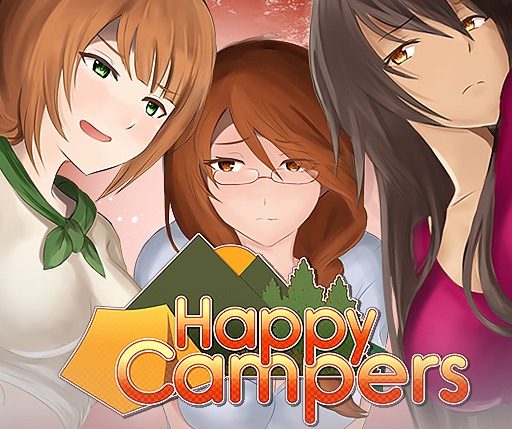 For the next seven days, the campers at Camp Merriment will enjoy the wonders of nature like never before. They will partake in filling meals cooked over an open flame, kayak in beautiful rivers, and see wild, yet friendly, creatures native to the forest. Their week will be spent in utter bliss, with campers taking home naught but fond memories…

It’s a shame you won’t be joining them.

Welcome to Camp Bearfoot; the abandoned camp ground where your instructor has accidentally led your group. With no provisions, and no sign of help arriving anytime soon, will the four of you manage to survive a week?

Play as a male or female and join together with Lizzy, a gullible young woman who doesn’t understand the point of clothing. Eliza, an entitled rich girl who refuses to get along with others. And Mai, a straight-laced instructor plagued by a lack of leadership skills.

In case readers have not figured out what the catch is, this game sounds similar to another title Razzmatazz worked on, Catch Canvas, except this one is set on camping grounds with wacky campers rather than a beach house with art students. If the “Yuri Mode” in this one will be similar (More than a change of pronoun) then it’s all good.

The interested can vote for the game HERE. Once greenlit the game would be scheduled for an April release.

Yuri and Slice of Life are my anime passion.
View all posts by OG-Man →
This entry was posted in Yuri news/topics and tagged Happy Campers, Razzart Visual, Steam Greenlight, trailer. Bookmark the permalink.