The following anime is something…oh it is definitely something alright. It is Flip Flappers.

Plot Summary: Papika and Cocona hold the keys to open the door. When the two girls meet, their adventures in a different time and different overlapping dimension called “Pure Illusion” begin. Many things in Pure Illusion will stand in the girls’ way on their search for the mysterious crystal fragments that, when all gathered are said to grant any wish. However, when in danger the girls call upon the shards’ power to transform into magical warriors. 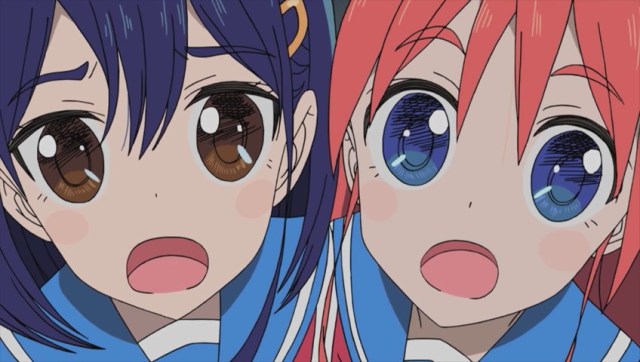 The best way I could describe Flip Flappers for a modern day audience would be a hybrid of Space Dandy and Yuri Kuma Arashi. It features SD’s “wild, crazy and random adventures to different worlds, dimensions and realities” style of narration with several references to both Western and Eastern media such as Mad Max: Fury Road, Tron: Legacy and some mecha series I am not familiar with to name a few. The YKA portion of the hybrid comes in the form of several symbolic images, character actions and illusions acting as puzzle pieces for both character development and the main plot. The puzzles range from obvious to complicated with some requiring a bit more research to understand until eventually the main plot unravels and MOST questions are answered while some, again, need researh to fully get or do not exactly have a solid conclusion. Suffice to say the main plot is a most interesting one provided the viewer enjoys the show enough to want to solve the puzzle and watch events unfold There is one more reason I brought YKA but we will discuss that later.

One of the show’s strongest themes is “Identity”. Without giving too much away for one, or possibly several characters, this wild and crazy adventure has the purpose of helping characters find the answers they are looking for about who they are, what they want in life and why they exist. Other themes include belonging, familial ties between older and younger relatives, philosophopical studies of the human mind, psychological exploration and of course the five senses, especially the sense of smell. As readers can tell from the drama tag in the genres section the show may be wild, wacky and zany but when it needs to get serious it does not fool around. Sometimes the seriousness can be straightforwarrd but other times it can get messed up to the max. The show looks colorful on the outside…

Next let us talk about the worlds our heroines visit. Each and every one features a different genre for action, adventure and drama. Every single one presents a different experience. Even the action and fight scenes, where most of them have the heroines and villains transforming, present a different kind of battle. It is not always magical girls vs enemy forces with the outcome or finishing blow being identical. ALL of the adventures, fights and experiences have different outcomes, giving the show an unpredictable feel to it so other than the small hints provided in this review it is best to approach this show as blind as possible for ultimate enjoyment.

It is funny that several anime shows feature female Super Saiyans but the original franchise where Super Saiyans come from has yet to feature one outside of video games as of this writing.

The show’s animation can be best described as paintings come to life. It is a style that is not easy to pull off, let alonne get right but in my opinion Flip Flappers does this quite well and I can only imagine how much fluid the motions, beautiful colors and zaniness will be on Blu-Ray. Simply put the show is a visual spectacle in the Pure Illusion worlds and pleasant to look at in the human world. The soundtrack fits the show perfectly with one of the best OPs of 2016 and a very charming ED. BTW, the ED is both fun to watch and features a narrative puzzle.

As far as the supporting cast go they are as random, zany and wacky as the show itself but of course when the show gets serious they too follow suit, eeven the mad scientist and crazy robot. Oh and there is one character in particular whose name starts with a Y that deserves the nation’s undivided attention. 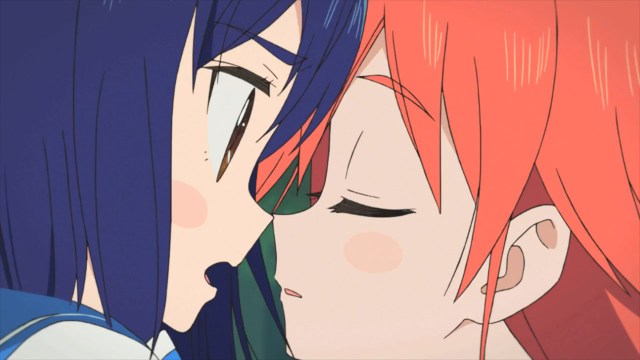 As for the yuri…without giving anything away I will say that PapiCoco’s romance is one of the deepest and most compelling of 2016. This is not love at first. It goes much further than that, especially for Cocona. Just when you think the show can no longer surprise the viewer it pulls another rabbit out of the hat. Speaking of rabbits Uexkull is one of the most interesting members of the leporidae family I have seen in fiction.

Overall Flip flappers already sounded interesting thanks to its covers and plot summary but what we ended up getting far exceeded expectations. The show is fun, wacky and exciting in Pure Illusion while the Human world has its fair share of surprises. The best way to approach this anime is as uninformed as possible and expect the unexpected each and every episode. Like most things in life not everyone will praise the show as much as I do and that is fine. It is a part of life. However, whether it will blow away viewers or not it is highly recommended to open-minded animeniacs and especially Yuri Nation members. Like Izetta, I predict that Flip Flappers will become a future all-time yuri classic.