So we had groups of cute and sexy women (with some lesbians usually added to the mix) make an impact in several kinds of sports over the years including baseball, mahjong, ping pong, kendo, professional wrestling, mixed martial arts and even intergalactic olympics to name a few. So what is the next sport women will make a statement in? How about a controversial one. This is KEIJO!!!!!!!! 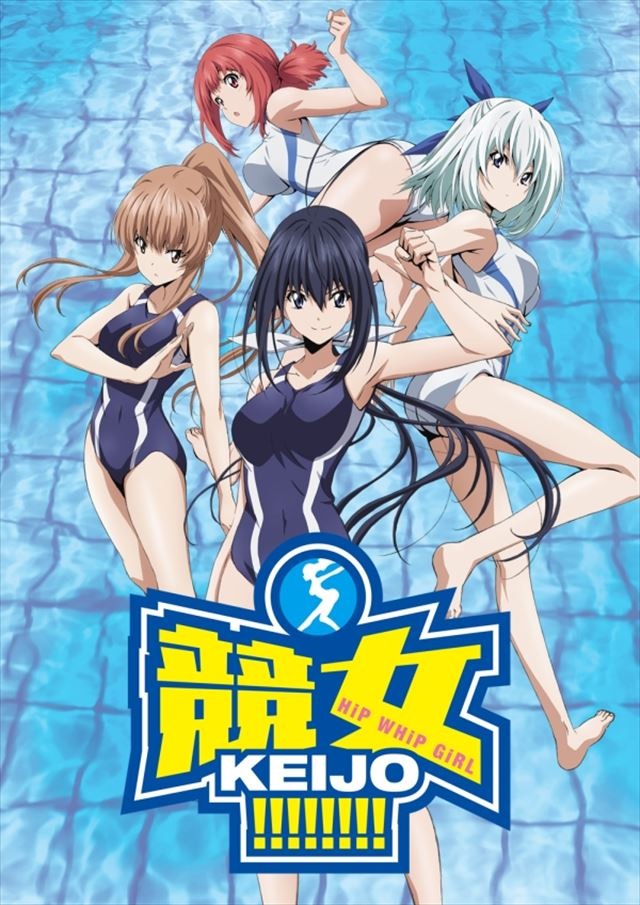 Plot Summary: “Keijo” is a popular gambling sport where contestants stand on platforms floating on the water and must use their butts and chests to fight against each other to push each other off the platform. Nozomi Kaminashi, a high school student, aims to join the sport after she graduates. Nozomi was raised in a poor family and hopes to make lots of money by playing Keijo. She grew up training in gymnastics, and she has good balance and flexibility. After high school, Nozomi joins a training boarding school and enters the world of Keijo. 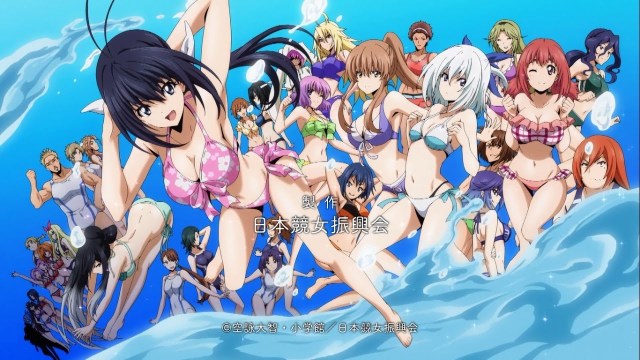 Would be swell is someone could make a Booty O’s parody for Keijo!!!!!!!!

Now on to the review. At first I compared keijo to sumo wrestling but in actuality it is not just that but more like a form of mixed martial arts where athletes are only allowed to fight using their breasts and butts. The same goes for team battles. Fighters are only allowed to save their teammates from ring-outs using their breasts or butt. Matches are won by either ring-out, knockdown or judge’s decision after time runs out. In case of a double ring-out the athelete who touched the water first loses. Using punches, kicks or eye gouging during battle will get the athlete disqualified. Athletes who have had breast or butt implants are not allowed to compete.

Now readers would probably ask why I spent the first paragraph explaining the basic rules of keijo. The reason is simple. To show that I cared about what was going on. See, like many other ECCHIMANIA shows this one is as easy to enjoy as it is to ridicule. Also like other ECCHIMANIA shows, if the viewer is able to look past the main attraction there is a solid story to be found. KEIJO!!!!!!!! is no different despite its main plot being pretty basic sports media storytelling. What I mean that the main plot is a standard “underdog team vs established high class team” narrative. The basics of sports media storytelling are all here:

While the main plot is basic the main attractions of the show are, as viewers can easily guess, the sport itself and the athletes. This is KEIJO!!!!!!!!’s biggest strength, being a unique sport that sounds silly on the surface but executes it very well and treats it and its cast with enough seriousness that it can be viewed as such.

KEIJO!!!!!!!! goes all out with its premise by having viewers’ jaws drop due to its ridiculously awesome special attacks. Oh yes, this is not just cute and sexy babes bumping into one another using their breats and butt, they go one step beyond with their shounen series quality over the top special attacks by further defing the laws of physics through these moves. Yes, KEIJO!!!!!!!! succeeded in the impossible, by going beyond anime logic and getting away with it, creating its own brand of keijo logic. Essentially this show put 50 years worth of breast physics and buttology research into practice. Like I said, the moves these ladies pull off are ridiculous, hilarious but oh so undeniably awesome. This is all thanks due in part to the excellent animation quality that captures all the T&A combat in all its GLORIOUSNESS! Watching this show in 4K is a MUST, especially to watch all the references each special attack is based on. I will not spoil any of them but suffice to say viewers will get a kick from seeing their bootylicious and breasttacular counterparts. Oh and the soundtrack is decent.

I mentioned in a spoiler tweet for the review that as sad and predictable as KEIJO!!!!!!!!’s poor blu-ray sales were, it is still one of the greatest ECCHIMANIA shows of all time and I stand by this statement. This show has everything I love about the super niche genre of anime:

Some would add “clothes being shredded in combat” but I honestly consider this the weakest part of the ECCHIMANIA subgenre. I do not mind when it is there but it is what I pay the least attention to. This show thankfully has very little clothing being shredded 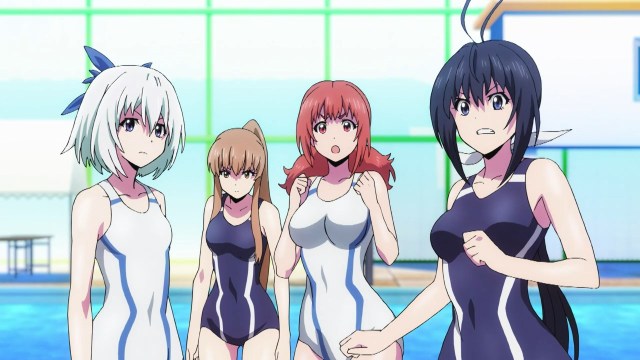 The main four from left to right: Miyata, Aoba, Non and Nozomi

As far as the cast go they are all fun to watch. Some get character development arcs, besides Nozomi who gets the most, others show up and contribute their part and a select few are background characters who get less than five minutes of fame when called up for battle. As readers can tell this is a show that has a large cast but could have done a better job balancing their screen time and not making some of them feel like a “random hot chick”. On the birght side there are very few “random hot chicks” and enough cuties who get sufficient screen time to be entertaining and memorable besides the main four.

As far as yuri goes Nozomi and Miyata can be shipped together if the viewer so wishes. Perhaps Non and Aoba as well. However, one girl in particular is the creme de la creme of yuri goodness the show has to offer and possibly the best character.

Mio Kusakai before her best moment.

Mio Kusakai. Combine the genetic perfection of WWE’s Charlotte Flair with the lust for female flesh of Senran Kagura’s Katsuragi and you have Mio. There is not a single scene where Mio is not on the prowl for ladies to consume, though only if the one she hunts is willing to be consumed by her undeniable expertise. She also uses her charms as a weapon to lower her opponents’ guard for she is a deadly warrior but none know how deadly she can be, hence why she flirts with enemies to distract them just enough to go in for the kill. She even has a “sidekick”. As mentioned in the screen grab Mio’s best moment is included in what is arguably the best episode on the show and no it is not just because of her. There is another reason that I will not spoil.

Overall KEIJO!!!!!!!! is as easy to enjoy as it is to ridicule. It is the “Broken Brilliance” of anime in 2016. I am not going to come here and be one of those “Do I regret watching this show? No. Does it need to exist? No” kind of people. KEIJO!!!!!!!!’s existence is a blessing from the mad geniuses over at Japan who somehow can get away with this insanity. Its main plot is basic sports media storytelling but the uniqueness of the sport itself, the ridiculously awesome logic defying special moves and their references, GLORIOUS animation and the likable/sexy cast are the real meat of the show. I stand by my statement that this is one of the greatest ECCHIMANIA shows of all time. As far as who to recommend this show to? I do not need to state the obvious. Readers who either like ECCHIMANIA series, hate these kind of shows or only watch it because it is their job to critique anime know who they are and whether this is for them or not.

PS: I think in the right hands KEIJO!!!!!!!! could make a pretty good arena fighter like Project Stone.

PPS: My one disappointment is that R. Mika did not make a special guest cameo as a keijo veteran. I suppose Xebec would have needed to pay Capcom some dough to get the rights to do so.

Yuri and Slice of Life are my anime passion.
View all posts by OG-Man →
This entry was posted in G-Views and tagged action, ecchi, fanservice, KEIJO!!!!!!!!, sports, tournament. Bookmark the permalink.