An anime that initially grabbed the Nation’s attention thanks mainly to its poster and the first sentences of its summary. The story being set in a fictional World War 2 Question is whether it delivered something magical and captivating or was false advertising? Let us find out as we take a look at Shuumatsu no Izetta, or Izetta: The Last Witch. 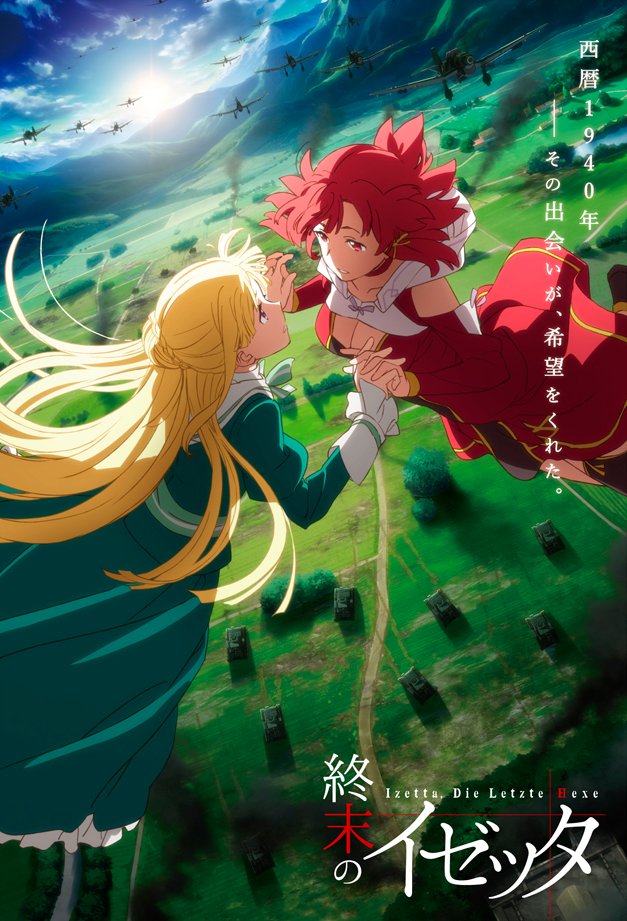 Plot Summary: In 1939, the imperialist nation of Germania launched a sudden invasion of its neighboring countries. This conflagration engulfed all of Europe in one fell swoop, and the era was dragged into the maelstrom of war. Then in 1940, Germania set its sights on Elystadt, a tiny principality blessed with breathtaking greenery and water in the Alps. Izetta is a descendant of a clan of witches who had passed down mysterious powers for generations. Since she was little, she and her grandmother lived their lives on the road, traveling between European countries in order to hide these powers. Fiine is the sole daughter in line to succeed Rudolph III, the ruler of the Principality of Elystadt. Since her father has been stricken by illness, she has been busy preparing for Germania’s invasion in his stead.

To put it simply this is a story of two beautiful and badass women leading a small army to war against (a more than obvious) Nazi Germany and doing all they can to fight back against the ever growing superpower that is after world domination. It is story filled with politics, WWII references and weapons up the wazoo (some fictional but many factual), espionage and of course the horrors of war. Basically what one would expect from a WWII inspired story. War historians/history buffs will have a good time recognizing weapons, vehicles and even some historical events during WWII. Oh and the two leading ladies have a very touching romance but more on that later.

While the action scenes featuring Izetta riding on her magic boomsticks combating enemy is always awesome to see whenever it is time for an action scene, as mentioned above it is not all about fighting. There are also negotiations, board meeting discussions and behind the scenes shady stuff that is both for the betterment of one’s country or selfishness. When it comes to most negotiations and political/social meetings, this is where Princess Ortfiné Fredericka von Eylstadt, or Finé for short, comes in. While not a skilled soldier (as far as we know) she more than makes up for it with her bravery, unrivaled charisma and never say die attitude. She is an inspirational leader to the people of Eylstadt and its soldiers on the front lines rallying her troops as best as she can and helping them not lose control. During meetings she usually shows that she could hold her own against middle-aged ambassadors and the like who may think little of her due to her not seeming as exerienced because of her age. In short Finé is a sexy badass who may not throw a lot of punches on screen but is also not afraid to get her hands dirty if necessary. Oh and she wears the pants in the show’s main couple.

Next up is the horrors of war part. While the story is fictional that does not mean it has a “good guys are safe but bad guys get axed” narrative. No. No one is safe and can get axed as early as two episodes after their introduction…or less. The reality of war is that no one is safe and this show is no exception. Expect deaths on both sides. Little to no mercy is shown.

The animation is really good. It is a nice blend of colorful goodness, delightful sexiness and brown and gray somberness. As the above image shows there are “male gaze” drawing moments but for anime veterans this is not surprising. It is what it is. It annoys, pleases or is just there. As for the soundtrack, I would argue it is one of, if not my favorite anime soundtracks of 2016 with a kickass OP, delightfully melancholic ED and wicked background tunes. Great stuff all around in regards to presentation.

The majority of the supporting cast do a great job filling their roles as either likable, sympathetic or downright despicable. Some of the heroes even pull off some underhanded tactics yet still have enough empathy to not suck.

Last but not least we have the biggest surprise of the show, FineZetta or FinEtta. Not surprising in them making a good couple but rather how GLORIOUS of a couple they ended up becoming. Let me put it this way, one would have to be in denial to not acknowledge Finé and Izetta’s ever growing bond to be anything but romantic. The classic yuri moments are all there ramped up to astronomical proportions. The one thing that is not ramped up much is the sexuality (though it is quite sensual) but what we do get is incredibly heartwarming. I have not talked much about Izetta herself because I was waitinng for this moment. Besides being a badass witch who gives 200% of herself on the battlefield to protect the people she cares about the the princess she loves, when it comes to her interactions with Finé she practically melts in her hands, like an innocent puppy yearning for her mistress’ affections. Luckily for her, next to her people and country Izetta is the  most person in Finé‘s life. Not one day passes when Izetta goes to war that Finé is not worried about her crimson haired beloved. Suffice to say when she returns safely the first to welcome Izetta back most of the time is the princess.

Overall Izetta: The Last Witch to me is almost perfect and one of my favorite fictional World War II stories ever told…for obvious reasons. The presentation, supporting cast, battles, narrative, mercilessness and especially main protagonists are all GLORIOUS! While it is missing a few things to reach near perfection it is good enough to recommend to almost all yuri fans and readers who do not mind occasional fanserive and shows that take some liberties with history. Easily one of my top favorite shows of 2016.

Yuri and Slice of Life are my anime passion.
View all posts by OG-Man →
This entry was posted in G-Views and tagged action, drama, historical, Izetta The Last Witch, magic, military, politics, Shuumatsu no Izetta, war, witches, Yuri. Bookmark the permalink.