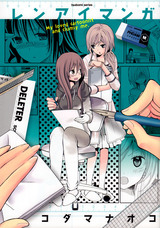 Story: A.K.A. My Loved Cartoonist and Clumsy Me
New manga editor Haruka has just been assigned to her favorite manga artist ever, Kuroi Ritsu. Kuroi-sensei’s manga, “With You” motivated her to turn her life around. When she finally meets shut-in, mopey, entirely unfashionable Kuroi-sensei, Haruka is in for a bit of a shock.

(Spoiler warning by the way)

To start off, I really like this Manga. In fact, love. 2 central characters (Haruka and Kuroi) the Manga revolves around and I must say that the romance between them is very lovely. But I am not completely satisfied with it as I’ll discuss later. I believe the Manga could have been so much better with the removal of these aspects I’ll later talk about. However still a very solid Manga.

Since this is an unfavourably short Manga, the romance does develop quite fast since there is not enough space to create a gradual and deep-rooted love. In my opinion, it doesn’t matter if the romance develops fast or slow as long as it makes sense and I like it, which indeed it does make sense and I do like it. Its short but sweet.

Romance is nice and fluffy. The characters eventually want to be around each other more and more. Kuroi comes up with excuses to be away from Haruka because In reality she really wants to be near her (I know, it doesn’t make sense). Haruka starts to become intimate with Kuroi and takes care of her like a wife. So yes, the romance is amazing. I don’t really need to say more. These characters also look very attractive if that suits your fancy, I know it does mine. 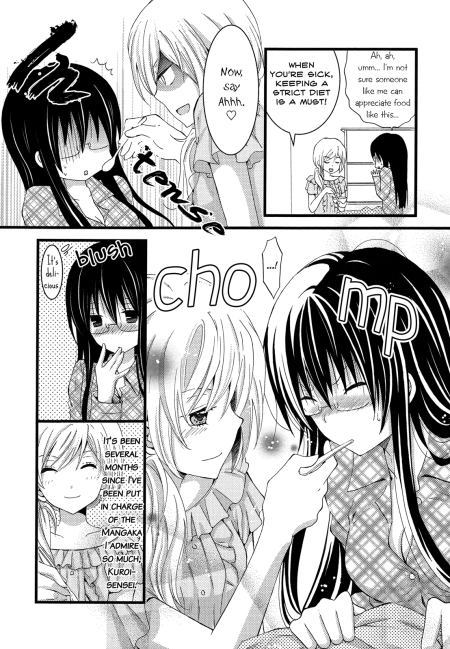 Anyway yes, the issues. Firstly the fact that there are very minor Het(Heterosexual) elements. (Last chance to turn back to avoid spoilers). To put it simply, Haruka’s mother wants her to get married and she was interviewed to marry a man. Even though Haruka seemingly shows no interest in this man her mother wants her to marry, it does not detract from the fact that this is in the Manga. I really, really, really hate Het elements in yuri manga, for many reasons. I’ll spare you the details for now but I disapprove greatly of Het elements in Yuri Manga.

2nd issue. Even at the very end of the manga, the 2 characters do not explicitly mention that they love each other. At the end of the 6th chapter, all we get is that Kuroi tells Haruka to never let ago and Haruka agrees. 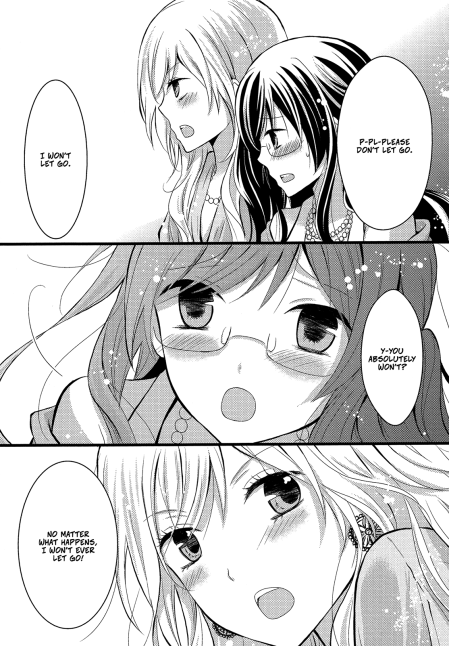 Yes, the characters want to be each other forever (which is pretty yurific) but it isn’t explicit therefore I’m not fully satisfied. Also at the end of the 2nd bonus chapter, Haruka and Kuroi start living together but in one of the pages, Haruka says she’s not going to marry Kuroi (I think),…… well let me show you. 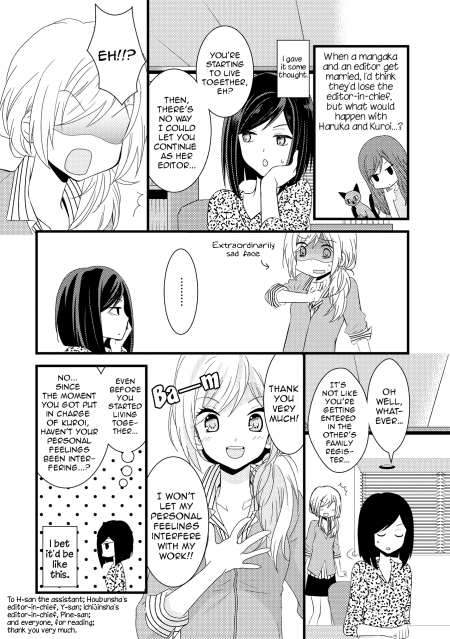 I was hoping for a delightful ending where Haruka and Kuroi get married, but unfortunately the Manga didn’t deliver. I got this vibe from it because of the amazing romance thus far. Please understand that these are only my complaints and you probably don’t care or don’t consider these as issues. But I like my Yuri Manga to be pure Yuri and have an explicit end to it. Amazing Manga though, defiantly a must read. Besides that I really do love this Manga, if only it was longer. It deserves to be much longer.

Thank you all for reading, I appreciate it! 😛

9 Responses to YMC #73: Renai Manga (By Your Average Joe)