This visual novel has had quite the journey before finally being made available for purchase, from a couple of delays to a heavily botched demo prior to its second planned release and finally a slip-up by Steam on the day of its third planned release. It seemed like fate was conspiring against this game being played by people outside Japan but against all odds it finally made it to Western shores. The obvious question now is whether this title, one of the most highly anticipated yuri visual novels that was announced for localization in 2015 was worth the wait. Let us find out as we take a look at Innocent Grey‘s FLOWERS -Le Volume sur Printemps-, published by JAST USA.

G-Rating: Good-Great (Depends on the wants and needs of consumers)

Plot Summary: Surrounded by immense walls in the middle of a forest, lies the prestigious all-girls school, Saint Angraecum Academy. It’s a school that prides itself on growing bright and cultured young women.

The academy’s special Amitié program is designed to help foster new friendships among students that will last a lifetime. This is why Suoh Shirahane, a painfully shy girl with a mysterious past, has enrolled. As her first year of high school begins, she is filled with hopes of a new life.

Follow Suoh as she navigates her new friendships and attempts to unravel the many mysteries at the academy. As spring warms into summer, so do friendships until they blossom into something more. Suoh’s heart opens for the first time, but is it okay to like a girl?

Printemps is the first of four titles in the FLOWERS series followed by été, automme and hiver, meaning that each entry’s story spans around three months time. A nickname for this series by longtime yuri fans, or at least I think it makes sense, is Maria-Sama ga Miteru: The Game, the same way A Kiss for the Petals franchise was probably nicknamed Strawberry Panic 3000.

Let us begin the review by bringing up what caused the second delay and something that put pressure on JAST USA when it came to FLOWERS’ localization, the translation. Again it was pretty bad when the first demo came out. Now after the title’s official release I can say the translation is…solid. Not perfect but passable. Every now and then there are typos and a couple of grammatical errors but nothing that cannot be fixed with a patch. “plreaders” (play-read) can enjoy the story from beginning to end with little problem, though perfectionists and nitpickers may take issue with mistakes still being present. There are times where the ladies will speak but there is no text. These few moments are part of the game itself and I assume not much can be done about them but more than likely it is not difficult to guess what is being said. Also I am not sure if the correct translation is Catholic or Christian. Anyway I still commend both Tim and Meru for helping with the translation and let us hope that the experience in this first entry will help make the translation job of the sequels less hectic.

Next up is the first thing that caught the eye of every single Yuri fan who was interested in FLOWERS when it was first revealed. The presentation. There is only one word I can use to describe its presentation. I will borrow Bobby Roode’s catchphrase: This game looks… 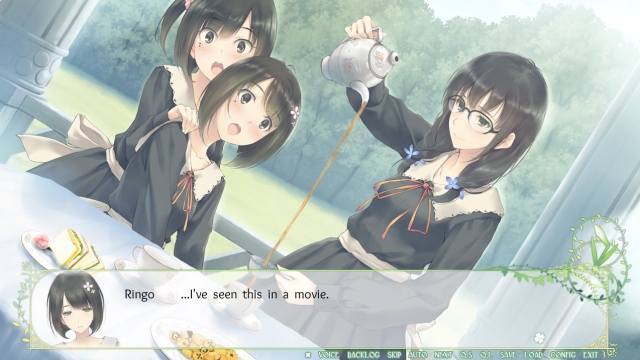 So yes this is one of the most visually stunning yuri visual novels I have ever “plread”. The textbox, the menu, the options, the soundtrack’s vintage yuri+classical music combo, everything about FLOWERS’ presentation is GLORIOUS! “Plreading” this game brought serenity and bliss to my somewhat internet corrupted soul. It is no wonder the Nation was instantly enthralled by FLOWERS before it was even localized. Do not get me started when its localization was announced.

This flower is important both in gameplay and symbolism.

First are the standard choices. Which route the “plreader” is taking largely depends on the color of the light the flower receives, a green or a yellow light. The more times the flower is showered with same color of light, the closer it is to either blooming or budding, indicating which girl Suoh is after. It is easy to figure out based on sound what effect either color has on the flower. 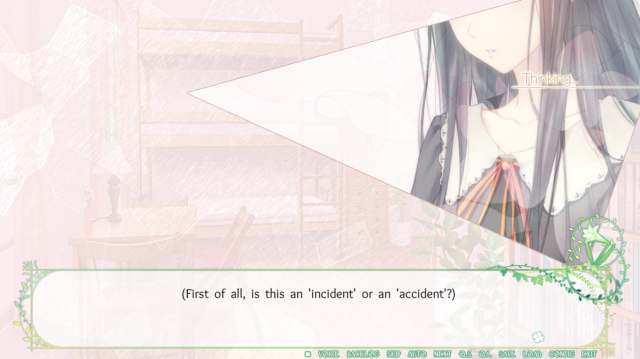 The second is Detective/Thinking Mode. In some chapters there will be a mystery Suoh will have to solve with two-four questions. The difficulty in solving the first two mysteries without paying attention and then Googling like I did is moderately high. I get the feeling those two mysteries were designed with Japanese audiences in mind though thankfully if the “plreader” paid attention there are some alternative ways of solving those two mysteries without “cheating”. Then there are the other mysteries…those rely HEAVILY on how closely the “plreader” paid attention to what was going on. In short, believe it or not the first two mysteries are the easy ones. “Plreaders” can either do their best to solve the mysteries or go with drawn out “trial and error” approach. Yes. Getting good endings require solving the mysteries, though to unlock all the CGs extra features all endings need to be obtained, good and bad ones. While Detectice/Thinking Mode’s execution was hit or miss it was still decent and the mysteries themselves were fun to see unravel.

Now presentation and gameplay (translation only applies to foreign VN/KNs) being good are fine and all but they only make half of what makes a visual/kinetic novels appealing. The second and arguably most important half is the story. So how is Printemp’s story? While the enjoyment of this story depends on the “plreaders” patience and tolerance, I personally thought it was really good. The story has some lighthearted moments here and there but it is a dramatic story about a shy girl in Suoh Shirahane slowly but surely breaking through the social barriers forged by her dark past. As the story progresses and based on the “plreader”s decisions Suoh will take baby steps and open up and more will be revealed about why it is so hard for her to overcome the darkness. Along with Suoh there are her two roommates/Amitié/love interests, the cool girl Mayuri Kohsaka and the sweet yet stickler for the rules Rikka Hanabishi. Both are likable but of course have their own secrets. Besides the main Amitié trio there is the mostly enjoyable supporting cast of the Sasaki Twins, the two beautiful senpai, the gorgeous Sister Dalia Basquiat and a mystery girl. The twins are the most recurring side-characters but the other ladies also get their time to shine. This is where I would have said that it is a shame that we did not get to know about the other ladies besides what Suoh sees and hears about them but the reason for that is because Printemps gave us a taste of who these side-characters are and more will be revealed about them in the sequels.

Another nice part of the story is that while all the characters can fall under various stereotypes they are written in a way that they not go over the top with said stereotype. Suoh is a shy girl but she comes off as a believable shy girl whose struggles to open up and befriend people is not exaggerated. Even though she is tall, cute and beautiful she still sees herself as ugly. Through Suoh it is explained that for some people it is very difficult to befriend or even talk to others whether it be because of past misery or other intrapersonal reasons. The way religion is implemented into the story was also nicely done. It kinda played a part in the main story and romance but not like it was the source of conflict. It was more like the characters’ religious beliefs determined their moral and ethical outlooks. Religion is treated as more of a guideline to live a proper existence, not like an absolute where people who do not follow Christianity or Catholicism are “doomed”. It made Saint Angraecum Academy seem like an alright school…provided the students can hang in there that is. This will make sense while “plreading”. Next up are the media references, both in literature and film adaptations. Believe me when I say that after checking Printemps out it will entice some to give either the book or film adaptation of Wuthering Heights a go…among several other titles. One that caught my eye involves a young miner.

Lastly let us discuss the yuri. Like the way the characters were written the same can be said for the romance. It too was well written and Suoh’s journey to find love was a very emotional one filled with many obstacles from the classic “Am I gay?” to “Is it alright to be gay?” and many other roadblocks from both past, present and future. The romance will twist knots and the squeeing will be loud.

Overall FLOWERS -Le Volume sur Printemps- will either be seen as a solid or great start to the series. The presentation is GLORIOUS, the cast is likable and for the most part interesting, the translation is not perfect (occasional typos and some minor errors) but at least solid. Hopefully it will be patched as time passes. The romance is both heartwarming and heart-wrenching. I am glad the title finally made its way to the West and hope the sequels will not be too far behind. As always it is up to the reader if the titles I cover interests them.

Get the game on either Steam or JAST’s FLOWERS page.