A cute yuri game adapted from a classic work of Victorian Literature, A Little Princess by Frances Hodgson Burnett, developed by Hanabira and published by Hanako Games, a company led by the Hella Yuri Boss Lady herself. How could I NOT have been hyped for it? As usual in hype worthy games the question is whether it lived up to it. Let us find out as we take a look at A Little Lily Princess.

Plot Summary: Newly arrived at a boarding school in Victorian England, Sara Crewe uses her love of books and storytelling to build new relationships. But what happens to a fairy-tale princess when she loses everything? 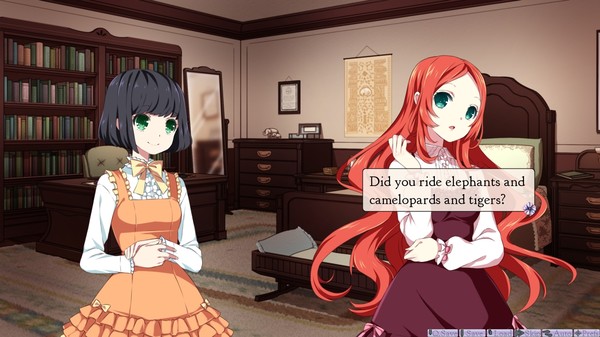 I have not read A Little Princess but after playing A Little Lily Princess and looking up how similar it is to the book I can honestly say I would love to read the book when able. Lily Princess’ story is an adorable and moving one that teaches important life lessons, educates people a little bit about other countries and cultures back in the Victorian Era, historical figures and events around that time, (specifically England, India and France), being strong and kind no matter what the circumstances and even some French and Latin. Also even though the story is romanticized I would not be surprised if there is truth in the depiction of the depicted social classes in England back then. Basically a warm, adorable, educational and motivational tale filled with yuri and highs and lows for some characters

Sara herself is a great heroine who even though enjoys the benefits of having been born rich never let it go to her head. Also her being a chick magnet, provided she spends enough time with her prey to get them to be smitten with her, is unsurprising. She is studious, optimistic, observant, clever, cunning and cute but is not devoid of negative emotions. She simply does her best to keep a level head for as long as she can but even the most levelheaded of people have breaking points… 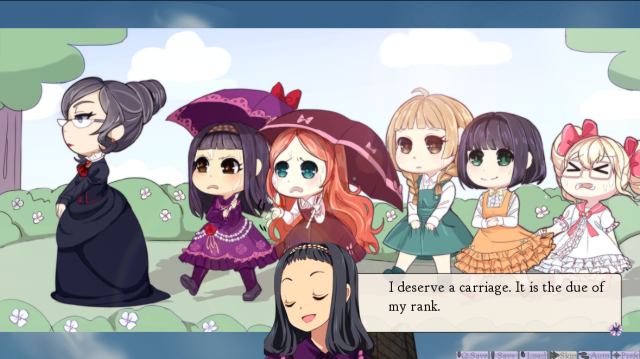 The chibi CGs are adorable like most of the game. From left to right: Miss Minchin, Lavinia, Jessie, Ermengande, Sara, Lottie.

Sara has six lovely ladies to woo throughout her time in the English boarding school:

Each “bachelorette” has an interesting story to tell the more time Sara spends with them individually and we get to learn more about Sara’s own journeys through her many stories. All the girls, even Lottie, are well written and worth courting, guaranteeing a unique flavor of cuteness and seriousness for each route. Like most dating sims there is bound to be at least one favorite for each “plreader” (play-read). 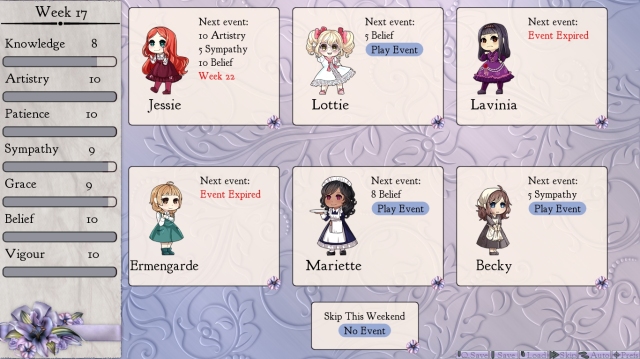 Now for Lily Princess’ gameplay. It is a Raising Simulator. Since this if the first time I reviewed this kind of Western/English visual novel here allow me to briefly elaborate. Raising Simulators involve weekly activities where the “plreader” picks one for each day of the week, thus receiving stat boosts for the attributes on the left side of the screen. “Plreaders” can see what stats each activity boosts. In some games the stat boosts are the same for each activity chosen while in other games like Lily Princess the stat boosts are random. The idea behind this gameplay is to simulate time management and character growth. In Lily Princess these attributes are used to access events for the respective “bachelorettes”. Each one has different requirements, for example in the above image Becky needs 5 Sympathy points to access her next event while Jessie needs 10 Artistry + 5 Sympathy + 10 Belief points to access hers. This is also important because if some girls are neglected for too long their routes will be locked with the “Event Expired” message so choose carefully which girls (three maximum per playthrough if done correctly.) “plreaders” are most interested in, specifically for second playthroughs and onward to make them less long.

I personally feel mixed about the RS implementation in Lily Princess. In previous Hanako Games…games like Long Live the Queen and Black Closet it made sense because of how it fit into the story and has big repercussions. On the one hand I get why the RS element is there. The story takes place in a school setting and the knowledge learned there could come in very handy when talking to others. On the other hand it felt tacked on because previous HG games featured similar gameplay elements and it is here for the sake of continuity and giving the “plreader” a way to access events rather than just picking which girl they want to visit next. Still the RS element is there and it is no big deal. Just a minor gripe I wanted to point out. It makes sense storyline-wise yet kind of feels tacked on compared to previous company titles. 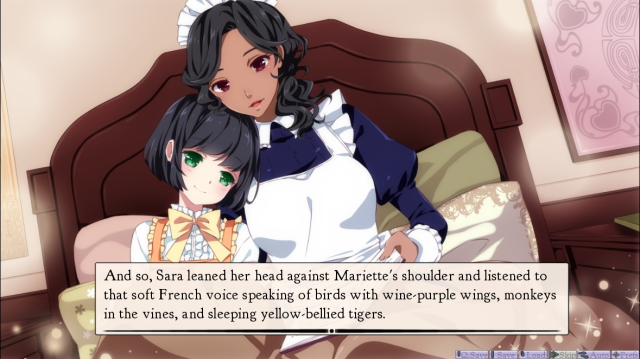 Thank you Hanabira and Hanako Games for the wonderful gift that is Mariette.

As I mentioned several times this game is adorable and precious, especially visually. The character sprites, chibi CGs and special CGs are all delightful, safe for work eye candy. As for the soundtrack it is the tried and true combination of lesbian romance + classical music. They go hand in hand you know.

Overall A Little Lily Princess is enjoyable, adorable, emotional and motivational. Sara is a great protagonist, the other girls are all interesting and add their own distinct yuri spices and the presentation is delightful. Minor gripes with the gameplay feeling tacked on aside it still makes sense and adds fulfillment after courting the desired “bachelorette”. Recommended for yuri gamers who enjoy cuteness with a dash of seriousness.

Get the game on STEAM or Hanako Games.

Check out the Hella Yuri Steam Group for more info on Steam games featuring or centered around yuri.