This next G-View will be brief as the anime is a shot. This is Mahou Shoujo Nante Mou li Desukara. 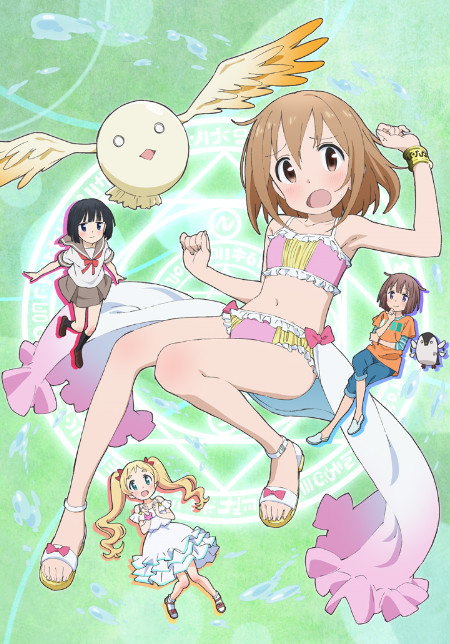 Plot Summary: Yuzuka Hanami is a young girl who has few friends but who can do anything. One day, Yuzuka gets accosted by a strange creature named Miton who is digging through a trash dump. Miton tells Yuzuka, “you have the makings of a magical girl” and seems extremely suspicious. When Yuzuka is suddenly transformed into a magical girl, she’s wearing a bathing suit 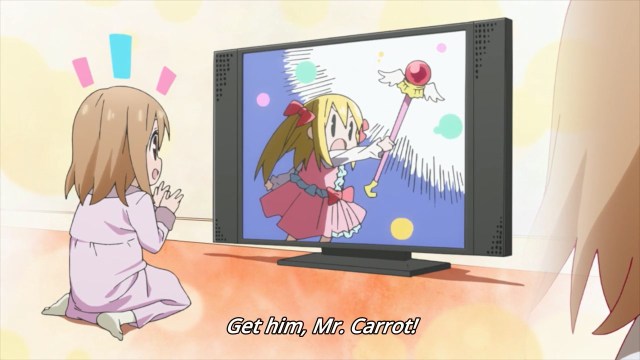 There is not much to say about this show. The show revolves the notion of being a magical girl yet having no baddies to combat and a “what now?” scenario. It is about a girl who is transformed into a magical girl, dislikes the fact her costume is a swimsuit and spends most of the time dealing with it but not liking it much by testing her powers and showing her “gift” to the fewest of the few. That is all. That does not mean the show is bad, simply that because the episodes are less than 4 minutes long there is little to do.

I can sum up the cast in a few sentences.

-Yuzuka dislikes her situation but somehow deals with it.

-Miton is naughty and gets tortured because he is voiced by Kyubey.

-Daiya is a cute blonde girl.

-Dad works long to the night and has become a slave but keeps on doing it for his family.

There are other characters but they too are simple to describe. Ah yes. I forgot to mention one character, who also happens to be the show’s top star.

Chiya, or as I like to call her Quiet Girl. She only says what needs to be said, is soft spoken and most important of all, has a crush on Yuzuka. She does just enough to not make her “more than friends” feelings for Yuzuka blatant and cares so much about her friend to the point of being a yandere toward the flying Onsokumaru-Kyubei hybrid.

The animation and music are plain.

Overall Mahou Shoujo Nante Mou Ii Desukara is a very short and simple show that has some chuckle worthy moments but little else. That is not to say it is bad, simply that there is not much to do with the material and time given. The characters are alright with Chiya being the highlight. That is all.

Yuri and Slice of Life are my anime passion.
View all posts by OG-Man →
This entry was posted in G-Views and tagged comedy, magic, magical girl, Mahou Shoujo Nante Mou Li Desukara. Bookmark the permalink.