So we had a serious and somber tale in Asphyxia, then a not so somber ballad in The Sad Story of Emmeline Burns. Now see what happens when the adorably twisted mind of ebi-hime goes slice of life on the Yuri Nation as we take a look at Strawberry Vinegar.

“Feed me, or I’ll reap your soul!”
And with those ridiculous words, my whole life was turned upside down.

Sakuraba Rie, aged nine, is a cynical and grumpy girl who cares little for her fellow classmates, and does not have a single friend.
That is, until a self-proclaimed demon from the deepest, darkest pits of Hell suddenly appears in Rie’s kitchen and steals a tray of cookies.
What will happen between these two young girls? Will friendship blossom between them, or perhaps something more?
That is up to the reader to decide – but rest assured, no matter what, there will be lots and lots of delicious food! 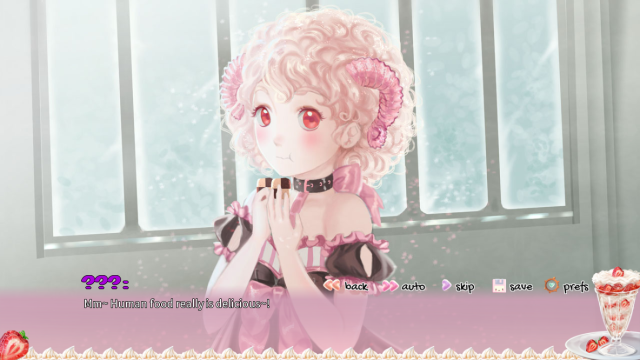 A cute demon girl with a blonde afro and shrimp-like horns. OG approves.

The game tells the story of a grumpy nine year old girl named Rie with a negative outlook on life and society and her relationship with a kind, optimistic and very cheerful (genki) demon girl named Licia. The game has a strong Girls Club (Slice of life anime/manga centered around a group/pair of girls) feel to it as Rie and Licia, apart from eating, engage in many familiar tropes of the aforementioned SoL subgenre such as sports events, festivals and lots of cuteness. There are also references to familiar anime, manga and even other visual novels. Players who enjoy testing their anime/manga/game title memory like I do will have fun with said references. Speaking of anime and manga since SV takes place in Japan it is also somewhat of an educational piece, like the previous two games taught about English literature, on Japanese culture, its cuisines and even some minor “misinterpretations by weeaboos” jokes. Neat stuff. Besides the clashing viewpoints of the entire cast the story also has a strong theme about familial bonds and how they influence a child’s growth. This game has a sweeter feel this time because unlike the previous two yuri games, this one is not covered by a somber fog.

This game made me hungry many times.

As mentioned above the story has Koufuku Graffiti (or any other anime/manga with an emphasis on food description) style segments where Rie describes the food items she and/or only Licia prepare to consume. Besides ones the two eat by default there are also moments where the chosen meals play an important role, in the gameplay. The multiple choice segments differ between regular ones players would expect to advance the plot and choices based on which meals Rie picks to feed Licia, meaning that the kind of food the player picks will affect Licia’s “affection points” and determine which of the five endings the player will get. There are actually six endings but getting the first one near the beginning that has nothing to do with food. Readers can guess what kind of ending that one is.

Players who are familiar with ebi-hime’s work will recognize the art style used in SV. What is an especially nice touch is that all but one of the characters in the game have multiple costumes. Not two, sometimes three to five! Personally it has become the quintessential style in her yuri (Not counting her other covered genres) themed titles. The soundtrack fits the mood of the game as it has many cute tunes and some soothing piano melodies.

One heck of a dynamic duo.

Before getting to what readers are the most curious about let us talk about two equally important/entertaining characters in the game, Rie’s parents Kazuki and Yuki. Yuki is a sexy, badass half-demon (Not actually a demon but could be mistaken for one) esque mom with an incredible wit, no-nonsense attitude and a sadistic catlike charm. Kazuki, aka Dad-chan on the other hand…

Let me tell you manly male readers something about Dad-chan. All of you who are proud of your manliness, trained in the gym for weeks on end to carve the perfect buff bod and are confident in your machismo…those who dare play this game…will question their manliness after meeting Dad-chan. You will be asking yourselves “Am I really as manly as I say?” “Is the path to true manliness the one Dad-chan followed?” “Is HE the  true definition of GAR?” “Should I be like Dad-chan to achieve ultimate manhood?” Dad-chan is THAT DAMN AWESOME! A real man’s man!

Like any Japanese series featuring the underworld SV takes liberties with its description of it.

Now then on to the main event. Yes, Rie X Licia can happen but the player has to put the right puzzle pieces together to get it to happen and yes it is worth it. Having said that, what is Rie and Licia’s relationship like before getting to that point? Besides the “demonic friend” anime trope, Rie and Licia are the classic “grouch and happy camper” duo, think Pinky and The Brain but Licia being far more intelligent than Pinky but equally as sharp (Meaning very much so) . The two eventually bring up “love” but the player must keep in mind that the two are still children. Kodomo no Jikan this game is not…at all. Perhaps a wee bit of Hanamaru Kindergarten.

Get the game on Steam here.