Brilliant Shadows – Part One of the Book of Gray Magic Review

This game jumped out of nowhere when it came out. If it weren’t for the Hella Yuri Steam Curator Page I wouldn’t have noticed it right away. After playing it, the question is whether it was worth being noticed by the yuri nation. Let’s find out as we take a look at Ithaqua Labs‘ Brilliant Shadows – Part 1 of the Book of Gray Magic.

Brilliant Shadows is a visual novel that follows the story of Veronica Ashmar, a new graduate of the Mountain and a necromancer. Tradition dictates that upon graduation, necromancers and paladins are to perform the pairing ritual. Binding together one of each type of mage, entwining their lives and powers with another and sealing their fates together with a matching mark upon their primary hands.

Those that succeed and become paired go on as full mages, those that do not are considered nothing more than hedge mages. There are no exceptions and the ritual has never failed…

Until the day Ash receives a mark and no fellow graduate to match it.

Now she must discover the origin of her mark and attempt to solve the greatest magical mystery that the Mountain has ever known.

The plot summary’s long but that all happens in the first five minutes with the last part of it being the main focus, Ash and her allies uncovering the identity of her partner and uncover other secrets along the way. While the identity of Ash’s partner and the other secrets are both interesting and worth reading till the end, the visual novel’s main draw are the characters, their interactions and to an extent the world’s lore, which is nothing new when it comes to Western magical fantasy settings but still worth learning more about in future installments.

Before I get to the content let us briefly go over the gameplay. It is standard multiple choice visual novel fare with branching paths. The gimmick here is the type of ending the player gets, three in total, depends on how few “meanie Ash heads” the player gets. Besides choices that take the story in a different direction sometimes there will be choices with negative effects, hence the “meanie heads”. It’s not difficult to avoid “meanie heads” but they are there for players who are curious about the “balanced” and “bad” endings. 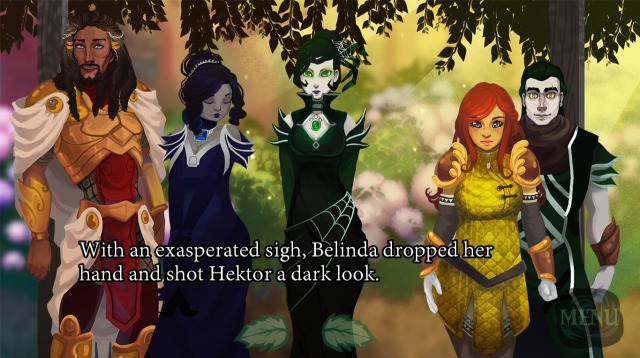 The reason I will mostly discuss the characters is because the main story revolves around the mystery partner and the dangers. The characters are where it’s at with their diverse personalities and history that come off as familiar yet not at the same time. It’s difficult to explain. Like Hektor and Belinda may come off as a blunt deadpan and a whiner respectively at first but as the plot progresses players find out they are much more. The same can be said for our leading lady Ash, her brah Prude and everyone else. Basically the classic “gathering of oddballs who eventually become one big ol’ plushie crew”.

The reason for the “diversity” tag was that the story’s world acknowledges  genders, races, culture, sexual preferences and age. It mentions that discrimination and prejudice still exist in parts of the world but for the most part the majority are open-minded. Minor spoiler example is how the oldest character in the group responds to ageism by convincing the few who question this that there is nothing wrong with it and that age shouldn’t be an issue on what one can or cannot do. The other aforementioned topics are brought up throughout the story with some getting more attention than others. Point being their acknowledgement is cool. 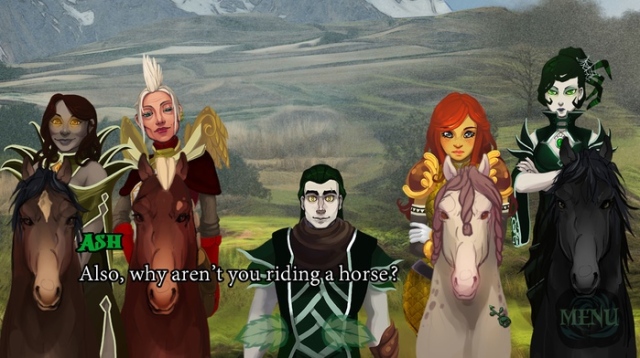 What makes the characters shine besides their personalities and the writing is the most impressive voice acting. Whether the voice acting is good depends on the player but to me it enriched the “plreading” experience. My personal favorite actors are Alex Weber as Hektor and Jane Redd as Belinda. Pretty good stuff.

One of the more serious moments.

The art style and CG quality are pleasant to the eyes, specially for someone who has played a lot of anime style VNs from both the East and the West. It feels…different. That’s the best way I can put it. The game finds ways to effectively use camera motion during certain CG scenes, mostly proper closeups between characters and can fit up to six characters on screen at once, which to me is quite rare in visual and kinetic novels. Oh and while the soundtrack is good there are times the sound drowns the voice acting, especially during the alarm/danger moments of the story. Make sure to balance the volume enough for the voices to be heard.

Readers have noticed that I have not talked much about our leading lady Ash. Obviously I was saving the best for last. While I found Hektor and Belinda to be the most amusing characters, Ash herself is my #1 in the story. Ash is a usually calm and collective plant necromancer who knows when to be polite and talk sass and depending on player choices she can either be a beautiful Jedi or a sexy Sith. This also brings us to the yuri portion of the review. Without spoiling too much Ash has two goals: Finding her mystery partner and also finding love. Readers can guess what Ash’s sexual preference by reading this review on this site. Players determine how she comes to accept that. As for her quest for lily love, let me put it this way. It’s yuri. Pay attention to the dialogue and what eventually happens depending on the ending and players will realize her quest is definitely lilycal. Oh and there’s also a second yuri couple. They don’t show up often but when they do it’s always interesting to say the least.

Overall Brilliant Shadows Part 1 is a great start and I hope to see more sometime in the future. The art style is refreshingly different for players who have “plread” Japanese style visual novels, the characters are diverse and amusing, the story is good and admittedly has surprised me once or twice, the soundtrack’s good and Ash is super gay. Readers who found this review interesting can give pick the game up and see for themselves whether they agree or not. I’d say the game has a reasonable amount of content and effort to warrant the asking price, which isn’t much to begin with.

Readers can buy the game on Steam here. or on itch.io here.

Yuri and Slice of Life are my anime passion.
View all posts by OG-Man →
This entry was posted in Yuri Video Game Reviews and tagged adventure, Brilliant Shadows, Diversity, fantasy, magic, mystery, Part One of the Book of Gray Magic, romance, visual novel, Yuri. Bookmark the permalink.