Back to reviewing anime for a bit before returning to visual novels. This time we will be looking at Himouto! Umaru-chan.

Plot Summary: Umaru Doma is Taihei’s little sister who boasts beautiful looks as well as prowess in both school and sports. However, she has a certain secret. She’s a “Himōto” a little sister who is proper in public but lazy at home.

As the summary explains the concept is simple. In public Umaru is a classic “model student” loved and admired by all who see her because of her gifted beauty, talents and intelligence. At home though she is a lazy, junk food loving, sometimes whiny, anime and video game otaku. This is represented in her two “selves”. Umaru “uses” her regular form in public while at home or outside the public she turns into her (usually) hamster hoodie wearing chibi form later known as “Komaru”.

Junk food combo of the gods.

Do not let the first two episodes fool you. It may seem like a show where it is half “Umaru being perfect” and the other “Komaru being a lazy, bratty otaku” but really it is fun slice of life comedy featuring the daily life of an adorable chibi otaku girl, her working class older brother and their friends enjoying life together or separately depending on who gets the spotlight. Also in spite of Komaru sometimes throwing tantrums (Trust me she does not whine very often) she is generally a kindhearted girl who is genuinely nice to everyone around her. She has initial minor difficulty making some friends because of her secret otaku lifestyle but it does not take long for her to befriend someone. Basically it may seem like a “certain other infamous anime starring an imouto and her older brother” but I assure you it is not.

The show’s two main draws are Komaru as a character and the numerous anime and video game references on the show. Fans of both media will get greater enjoyment of the show than casual viewers because of this as Komaru’s love for both media is admirable and not borderline insane.

Besides Umaru and friends the show also focuses on its second protagonist, Taihei and his colleagues. He is a working class college graduate who takes care of Umaru and himself and also does his best to keep his imouto in line, as hard as it is most of time. When he is not doing that he is usually at work with his eccentric colleagues and sexy boss. Again nothing like “that show”. In a way I respect the guy because he shows me that living alone after graduation with a steady job is possible. It may not be his dream job but at least he gets good pay and Umaru’s shenanigans at least keep his life from getting dull as he is not the otaku his sister is.

Besides the two leads the show also features the aforementioned friends and colleagues and as expected all are as likable as the stars. I shall now share my top 3:

First up is an inspirtation to people all around the world. A true heroine who makes kindhearted ojou-sama proud. Sylphynford Tachibana. A girl whose gaze, confidence, competitive nature and smile could melt the hearts of any ojou-sama fans such as yours truly.

The second is Kirie. The main source of yuri on the show. Without spoiling much she has eyes on a certain “duo” and her feelings for the two goes beyond a desire for friendship…Oh and her speech and mannerisms are adorable. 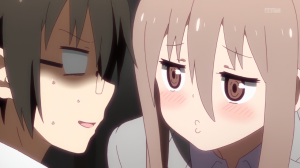 Lastly is Kanau, Taihei’s boss. The fact she gets very little screen time should be a crime.

The animation quality is simple. Nothing extraordinary. The soundtrack is cute and catchy, especially the OP. LOVE that OP.

The one minor flaw in the show is that it has a “If you have seen one episode, you have seen them all” feel to its narrative. The show provides little else than what I described above so for readers who are expecting something more than a fun and reference filled SoL about an otaku, her brother and their friends it is not wise to set expectations higher than that.

Overall Himouto! Umaru-chan is a simple yet enjoyable romp. There is not much to it yet what it does provide gets the job done as long as viewers enjoy lighthearted humor, anime and video games. The flaw I mentioned could turn some readers off though. If that is not a problem just remember that it gets much better after the first episode and Komaru’s tantrums do not happen often.