I mentioned in a previous yuri video game review that as far as visual novels/eroge with a sci-fi theme, there are very few with yuri themes. The following is one of said few. This is Fan-Na’s Anaheim: Girl’s Love Story.

First things first. In order to play the game in English it should be noted that there is no known patch. What that means is while the translation exists the game’s format does not make it possible to create a patch. Long story short after downloading the file in the link below, both the game and the viewer’s preferred internet software will need to be played windowed side by side, unless someone has figured out a better alternative.

Now for the review.

It also chronicles the development and construction of the fourth unit in the Gundam Development Project (GP-04 Gerbera), and its subsequent alteration into the Gerbera Tetra as seen in the “Gundam 0083: Stardust Memories” anime. 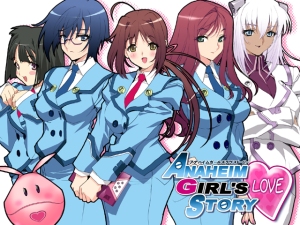 As the summary implied this fanfic story takes place during the aforementioned Gundam anime’s timeline so Gundam fans who also happen to like yuri may get the references and Gundams featured in the game. The girls featured here make up the main cast with the blue hair and brunette being the main couple. From left to right, apart from the main duo there is Mi Shuran (energetic mechanic who may or may not be a shortie), Marion a haughty ojou-sama with a wall and Chief Fifty Five, the strict yet amicable boss.

As for the leads, Rinne (brunette) and Sophie (blue), this picture sums the two up perfectly. Rinne is a basic kindhearted yet very emotional/sensitive girl with a punch of “bubbliness” and Sophie is the cold, cool beauty who has a hard time telling Rinne her true feelings most of the time. Be warned that Rinne’s voice can bother some. Their romance is straightforward but the fact this is a Gundam inspired yuri visual novel with 18+ love scenes immediately informs viewers the level of drama in the story. It can be melodramatic at times but that is to be expected. Still, I have seen worse and the two are likable most of the time and their romance is sweet for the most part. Oh and since the game takes place in an office district and this not being a short game some patience will be required before the real games begin.

The game is standard visual novel fare with occasional two choices to make. There are three endings in total with two that are easy to obtain and a hidden one that cannot be unlocked unless the right choices are made. Make one wrong choice and it gets locked.

As far as the graphics and CG go, while the backgrounds are there to serve their purpose the character art and CGs are pleasant to the eyes, especially the love scenes, provided readers like seeing well endowed women making love to each other. Good stuff. The music on the other hand…while decent it is recommended for viewers who prefer playing their VNs with music to turn it down a bit as the (decent) voice acting can be drowned by the music if it is cranked up. Let me put it this way, it is a better effort than Amaranto.

Overall Anaheim is a decent yuri vn. Nothing extraordinary but certainly not horrible. Again it is less deplorable than Amaranto, which I do not think is bad either but its mediocrity cannot be denied. Back to Anaheim, everything about it is decent. It is longer than most yuri VNs I have reviewed thus far but not Aoishiro or Katahane long. Readers who enjoy office beauties but do not mind occasional melodrama and a game that is not high standard but not visually appalling either can give this one a try.