My initial disdain for the following anime’s first 5 episodes are well known amongst my fans and foes. Cross Trash was the title I gave the show for a while and I was convinced it would be a long time before I even considered showing mercy. However, the Yuri Spirits sent me many signs telling me to give this show a second chance…MANY SIGNS! Eventually I got the message and decided to give the show a second chance by finishing it. Question is was it worth it? Let’s find out as we take a look at Cross Ange. 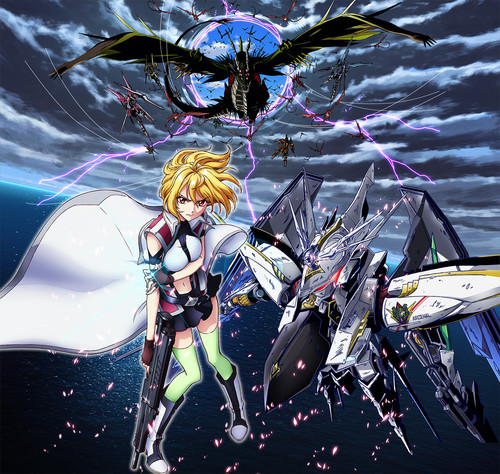 Plot Summary: Humanity has advanced to great heights since it obtained the information technology known as “Mana.” With that nearly magical power, problems like war, food shortages, and pollution have been eliminated. This age of peace and freedom, the Empress Angelese of the Misurugi Empire is a privileged girl with no disabilities. She learns, however, that she is a “Norma,” a kind of human who cannot use Mana and are outcasts of society. Having lost everything, she is sent to an isolated island. There she meets other Normas who ride in humanoid weapons called Para-mails, protecting the world from dragons invaders from another dimension.

This show…I stand by my word that the first five episodes were some of the most infuriating I had seen when I first saw it. The out of nowhere surprise during the OP was a bad sign but as it progressed more and more stuff happened that made my blood boil until I could no longer take it after the end of the 5th episode. Upon continuing with the 6th episode all the way to the 25th, this show…

…this show is not as bad as thought it would be. Oh there were still parts that made me cringe but the overall experience was a positive one for the most part…provided the viewer is VERY open-minded. Viewers, especially hardcore feminists who thought Kill La Kill‘s content was too racy and its depiction of women questionable then they would have a field day with CA. When the show gets violent it gets violent. No spilled organs or anything but there are many bloody battles and it is not only the ones against the DRAGONs.

This being a mecha anime and based on the ones I have seen I expected there to be both politics and a heavy dose of drama in the plot. I was right. As the themes and plot summary make clear there is a strong emphasis on racism and class division to the point that it brings up the age old topic of whether or not world peace could truly be achieved amongst the world of the living. This show when it is not focusing on its few lighthearted moments and questionable attempts at humor does not sugarcoat anything for the most part. There is discrimination, harsh words are exchanged, a utopia this anime’s world is not.  Keeping this fact in mind while watching makes the character’s trials and tribulations more understandable, especially Ange’s. More on that later.

The show’s overall plot is insane and will require some viewers to have a “just roll with it” mentality. While I do fancy crazy storylines that are cohesive I once again repeat that the show’s first 5 episodes were infuriating. First time viewers be careful. The show is somewhat less strenuous from episode 6 and onward.

Before I turned away from this show for a while I gave credit where credit was due. The girls on the show are hot, the young ones are cute, the mechs look awesome, the dragons kick ass and both the mecha and human fights deliver. Viewers expecting cool fight scenes will certainly get them here. The OST is fine. Nothing I would write home about but it gets the job done.

As mentioned above this show does not sugarcoat anything. It also does not hold back on its fanservice and raunchiness. Once more I bring up KLK and its ecchi content. I would say CA’s is between KLK and the Monogatari Saga with a pinch of Mnemosyne. The more sexual scenes are somewhat short but they get the steaminess across. At first it may look like the sexual content is there solely for titillation but it KINDA fits with the plot but I will let viewers see for themselves.

As far as the characters go let’s talk about the romance first. Initially what upset me about the introduction of Tusk and the other initial episodes was that I thought the writers included him for the otaku mainstream to cheer solely for him to win Ange’s heart as he would her white knight compared to the other meanie girls, especially the lesbians. I was wrong about the lesbians being disgraced. They were actually taken seriously despite what I saw at first. In fact my initial prediction of everyone else being more interesting than Ange and Tusk was 90% accurate though I can understand others who saw the show seeing Ange as their favorite character. 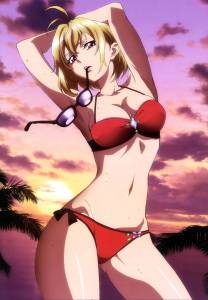 Ange herself is not a bad “pampered yet benevolent beauty” turned “hotheaded badass babe”. After all she goes through it is understandable why she can be a pain in the neck and take a while to trust others. This woman went through A LOT, especially a certain rescue mission…She is basically a “rough character who eventually lightens up”. I do not know what the term for that character trope is…if there even is one. As for her developing relationship with Tusk…it is what it is. Tusk is okay. At least he served a purpose and was not a FRI (Forced Romantic Interest) though their relationship is nothing to write home about.

As for the controversial methods used to achieve her transformation, I can understand why some would be turned off by it at first. Unfortunately some of the methods used are commonplace in storylines that have a female protagonist become badass. I too find it crude but as a certain reviewer said “How is it worse than what happened to certain people on Attack on Titan?”. Not saying the trope is justified but it’s the one the writers chose to use.

Everyone else though, as mentioned, all have interesting character developing routes, each jam packed with joy and sorrow…though for some mostly sorrow.

Two of my favorite characters are in this one pic. Before that though, the yuri is strong in this one. It is brought up several times throughout the show, is steamy as expected and surprisingly handled well. So yeah the yuri characters are taken seriously for the most part. Now on to my fav characters. #1 is the redhead in the middle Hilda. Her route is without question the one I was most invested in. #2 was a surprise. I did not expect to like Rosalie “Bulk” Bulkmeier (orange hair) more than Chris “Skull” Skullovitch (blue-silver hair). Their love story is also the most interesting. The one hint I will give for #3 is that her name is long, not her full name, just her name.

Overall CA was better than I thought. It is flawless in the slightest and some of its content can be off putting for some viewers meaning it is not for everyone. I would say it is mainly for the brave of heart and open-minded yuri fans. For everyone else I am not certain.

PS: To verify something, when I said “not as bad” or “better than I thought” does not mean I said the show’s really good. If I were to give it a rating it would be around a 5 at worst or 7 at best. 8 or 9 is pushing it.

Yuri and Slice of Life are my anime passion.
View all posts by OG-Man →
This entry was posted in G-Views and tagged action, Cross Ange, Dragons, drama, Dystopia, ecchi, fantasy, girls with guns, Gore, mecha, Racism, Yuri. Bookmark the permalink.