Note from OG: Here’s the Yuri Nation debut, though he already contributed a CariView on Anime Island, of one of my broskis, Sir eclecticdude26.

So yeah, in May I covered Alien Nine on OG-Man’s side blog and had mentioned that I will do a review for his main site. Well, for July, in lieu of doing an entry in my own blog (doing the Shimoseka episodics anyway), I figured that I would do one for OG’s blog. And since he covers mainly yuri/shoujo-ai series, my choice for first guest review would be over this:

“A Love Not Human”

Note from OG: If I were to give this a show a G-Rating it would be a 7/10. Alrighty, enjoy the review. 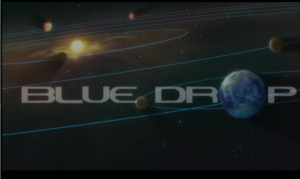 So Blue Drop, the somewhat known and somewhat forgotten yuri title out there I suppose. Anyway, it is the story of Mari Wakatake a young girl who ends up transferring to an all girls school, Kaio Academy, by her concerned grandmother. However, she is a bit of a sourpuss and rebellious, not exactly pleased with this sudden change in her life. This is possibly due to an incident 5 years ago that affected Mari with partial amnesia. She ends up meeting a mysterious student, Hagino in a very awkward situation, only to end up being roommates. Hagino holds a dark secret, a secret from another world perhaps. Over time Mari learns to get along with Hagino and her fellow classmates (Megane Michiko, Tomboy Akane and Plus-size Dorm Chief Hiroko) and her homeroom Yuko Sagawara, who may have her own secrets as well. It’s a riveting mysterious show, so that’s all I am saying about it. 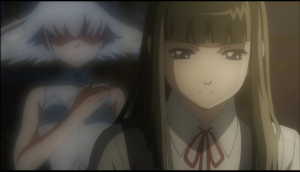 Episode titles are named after flowers which considering its a yuri title is very apt. I love how the story is framed, as an extended flashback of sorts. Granted the story is very serious and straight-laced drama at its core, there are moments of levity even comedy like episode 7 which is partially a beach/summer vacation episode. But then the plot continues on from that point. What strikes me about Blue Drop is how it achieves the slow burn type show. It has a slow, almost leisurely pace though it might come across as plodding but not to me. Of course it starts off rather pedestrian in the first half but then the second half is where it becomes more interesting.

Blue Drop also works well as a science fiction piece, a relationship study and a school slice of life story. First, the Science fiction is there although somewhat in that it involves just aliens and giant underwater warships. Though the battle sequences are cool looking though its only action for the show at all. There is also a revenge subplot by a side supporting character which would be interesting if not for the fact it is only continued by contrivances. 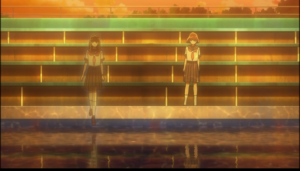 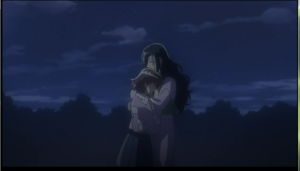 Next, the relationship study, a bit complex and probably the most interesting aspect of the show. With a mostly all female cast, of course there would be yuri, but it is very understated and pedestrian. Mari and Hagino’s relationship is nice and all but pedestrian whereas one that is poignant and meaningful is Azanael and her deceased girlfriend Onomil. The male Headmaster and Akane have an interesting backstory relationship but not given much to work on, and also a little surprising. .

Finally the School life story serves as a backbone to the other 2 aspects. Whether it is dealing with exams and studying or putting on a school play in preparation for a school festival, granted its fairly rote but I like its inclusion. Oh yeah the play is about Joan d’Arc and there is an interesting parallel between the play and what is going on in the show if you read into that further. What is interesting is that a catalyst incident ultimately links all these story elements in a way that really impressed me. 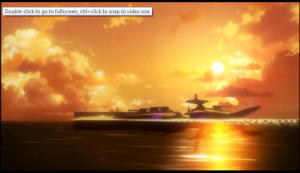 That being said, Blue Drop is a solid enough production overall. It doesn’t dip and derp at any noticeable moments, but then again doesn’t really stand out. Character designs are fairly human-like but standard looking. A lot of the backgrounds (done by Bihou, Inc) and still shots look downright beautiful. Some of the CG work, done by Gonzo, is a bit obvious in spots but good looking. Also for the music, it is equally reflective and slow-moving, with brief bursts of sound. The OP and ED Songs are quiet and peaceful light pieces, a pleasant listen to be sure.

Blue Drop has an interesting release history, but only in hindsight as a number of shows from that point forward have done this as well. Sentai Filmworks released this series twice, a sub-only DVD set in November 2009 and then a bilingual DVD release in September 2010. I own the bilingual release with the english dub. The ADR Director is Matt Greenfield with a script by him and Clint Bickham, and the  latest Greenfield dub that I own. Greenfield is most remembered as the primary ADR Director for Houston dubs between 1995 and 2004 roughly, and did a few dubs here and there from that point up to 2010 and after that (1 more in 2010, 2 in 2011, 1 in 2012 and 2014 each), recently director on Vampire Hunter D redub Sentai Filmworks is doing this year. Matt Greenfield is another person I have on my list of favorite ADR Directors/Scriptwriters in that he understands and cares about the material and enjoys the work immensely.

The cast list is a boasting feature on the DVD set, which includes Monica Rial, Hilary Haag, Hannah Alcorn, Laura Chapman, Luci Christian, Shannon Emerick, Tiffany Grant (since since Greenfield is her husband), Brittney Karbowski and Kelly Manison. Blue Drop marks the final dub appearances by Laura Chapman, Kelly Manison and Marcy Rae, whose careers span back to 90s ADV work with Greenfield. Unfortunately this feels like a late era ADV dub; one glance at the rest of the cast shows this quite aptly as it consists of mainstays from that era. Blue Drop is interesting in how far Sentai Filmworks has done in terms of dub work. Thankfully, it is a decent/serviceable dub, with some good performances overall from everyone involved. There are some stand outs: Kelly Manison does get in some great acting that reminds me of her earlier work (ie Slayers) and Monica Rial/Hilary Haag do nail their material very well. Aside from that, the voice direction is rather sedated but alright, though for some reason the Aliens have british accents, a very puzzling decision since not many of them can maintain it (Rial and Karbowski manage, whereas Manison doesn’t seem to bother). The dub script is functional if a bit cobbled in that it can’t really decide on whether to be faithful or adaptative, perhaps due to having Bickham and Greenfield collaborating on it. For instance, there are some rather unneeded snarky lines at point that probably weren’t in the initial translation, no doubt Bickham additions (he is, at least in dub scripting, a bit like Steven Foster only more restrained). Still a good dub effort and worth a listen.

Overall, Blue Drop is an effective serious drama show with a neat intersection of science fiction, yuri relationship study and school slice of life. It got a solid production with a decent english dub. If you are a fan of yuri anime, then you should check this one out.

Near end of month I will be making an announcement regarding August’s slate of reviews. It being the 4th year anniversary since I have been doing this, it will be quite special.

Til next time, dear readers….