A Kiss for the Petals spin-off: Hanahira!

Haven’t written one of these in a while so I may be a bit rusty in my Hanabira reviewing. Best to go with an easy to review one to get the flow back. This time we’re covering the Sono Hanabira spin-off game that was released after Lily Platinum, Hanahira! 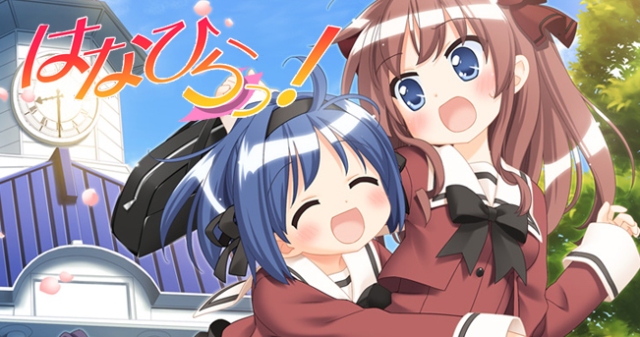 Plot Summary: The story revolves around four girls who attend Saint Michael Girls’ School and highlights all their cute dokidoki yuriyuri love for one another during and after school. The story is quite lighthearted and follows the four girls at school, shopping, hanging around and coming together for a pajama party.

The above summary pretty much describes all one needs to know about this episode. This game is one of the closest examples of a Girls Club game as it is little more than “cute girls doing cute things” and also being in love with one another. One would be surprised how long the girls’ lunchtime scene is. Think a calmer Yuru Yuri. The story is THAT simple. However, for Girls Club aficionados and the open-minded this is not a problem. There are some minor references to the main series, specifically after episode 10 but that is mainly to remind viewers this game takes place in the same universe though I doubt these four attend the same middle school as Runa since their uniforms are different.  I will say that a pleasant bonus that made the game even more enjoyable than it already was was the English translation by George Henry Shaft. I am not certain if the dialogue was exactly the way Mr Shaft translated it but it greatly contributed to the cuteness.

Compared to other entries in the series this one is the “safest” to play. Compared to the main series there are no love scenes to be found and the few fan service instances are quite tame. Everything from plot progression to character design is fluffy and bubbly. The story does not follow a single character as they share their thoughts/inner monologues on themselves, their love interest/lover and their relationship but rather it is a fully voiced story with only one silent instance born of a developer error. Basically the girls never stop talking. 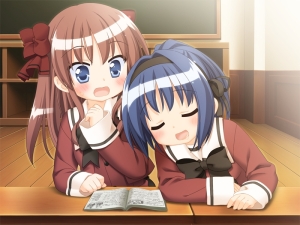 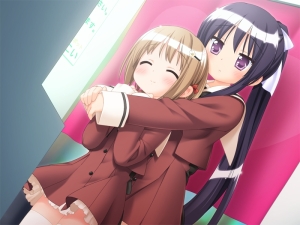 There are two main pairings in this one and it can be said this was the first game in the franchise to cover more than one pairing at a time before the first All-Star game that was episode 11. First we have Kaori the tsundere and Amane the genki. Their relationship is exactly as one would expect. Second we have Koharu the cute(er) one and my favorite Makoto the tranquil beast. Why do I call Makoto the tranquil beast? Her love interest is SUPER ADORABLE and she herself is soft spoken. Readers can put two and two together.

As mentioned above this game is for general audiences (as long as parents have had “the talk” with their offspring beforehand anyway) so there are no risque love scenes but a few tame fanservice moments. The game does play like every other Hanabira entry. There are occasional options and unless players make the right choices they cannot access the 4th act of the story. Also like the other entries the choices are straightforward and easy to figure out which are the right ones. 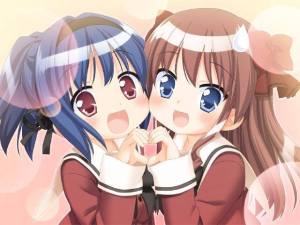 Overall Hanahira! is a cute, straightforward, “safe” Girls Club anime inspired entry in the Hanabira franchise with no love scenes to be found but many yurirific moments between the couples when they are not having fun chilling together. Cuteness and laughs aplenty for fans of the SoL subgenre and the open-minded. The game does not have the known Hanabira formula but it still feels like Hanabira.

5 Responses to A Kiss for the Petals spin-off: Hanahira!