I’d like to think up a fancy introduction for this review but I can’t. Instead I’ll say “teenagers will be teenagers”. This is Sora no Method.

Plot Summary: Nonoka Komiya is a girl who once lived in Lake Kiriya City, based off of Lake Tōya Hokkaido, where she met a blue-haired girl named Noel. Seven years later, Nonoka returns to the city, which now has a mysterious saucer floating above it, and reunites with Noel, who promises to grant her wishes.

First things first the show’s presentation is most impressive. The soundtrack and the animation quality are praiseworthy. Watching the show once again reminds viewers of the absolute beauty the countryside has to offer. This show had me loving sunflowers quite a bit and made me want to find and run in a sunflower field someday. Anime that take place in the countryside have had that kind of effect on me. My favorite flower is still the lily though…duh!

Getting the presentation out of the way I can confidently say that Sora no Method’s plot and characters are without a shadow of a doubt absolutely, positively, undeniably, INDUBITABLY…okay. Not terrible, not amazing, just okay.

I will get flack for this from some but the similarities between SnM and AnoHana are several. Not in the main plot, resolution and stuff but rather the concept and cast stereotypes. Yes these stereotypes have come together several times but I am serious when I say that they feel so much alike in these two shows. 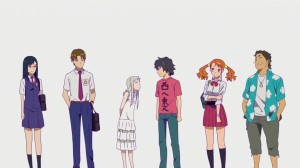 Having said all this I can honestly say I liked SnM more than AH and it also made me reflect that AH may not have been as good as I thought it was. However, that reflection had me seeing the realization SnM being better than AH as not saying much. 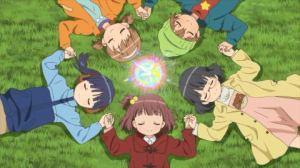 Anyway back to the SnM the show is a character driven drama exploring teenage-esque dramatic situations complete with teenage-esque angst. Not saying children and adults do not go through similar “angstiness” themselves but this stuff is debatably more prominent in teenagers., flying saucers and omega kawaii light blue haired lolis notwithstanding. It can easily get annoying or be considered sappy because of how many times the waterworks flood the monitor. Some reach the “oh so popular” “woe is me” level of angst. For viewers who have yet to pick this up be aware of this fact.

With that in mind let’s briefly discuss my thoughts on the main characters: 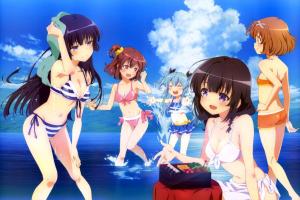 Basically it’s a cast of characters on a show where it takes some time for all of them to become likable, meaning viewers have to endure lots of whining and moping before everyone’s eventual redemption, if the viewer had not bashed his skull in with a hammer before that point.

And now for the character I consider the backbone of the show. The one character who did not suck even once in the show’s run. A character so adorable, so huggable, so magnificent that even a guy I know who “has no soul” could not help but melt every time she appeared on screen and did something.

Dear, sweet Noel. If there was only one reason anyone curious enough were to give this show a go it would be Noel. By gosh. She is literally the heart of both the main group and the show. She may seem carefree and ditzy at times but the sweetie knows exactly what to do when she gets a grasp on a situation. She knows what to say and when to say it. I have a nickname for her but that would spoil part of the story.

Overall, Noel and the gorgeous presentation aside Sora no Method as a whole is okay. Do I regret watching the show? No. Do I agree with some peeps who said this show is a contender for best anime of Fall 2014? No. Will I watch the show a second time? Only when I feel like I want to hug Noel again. For viewers who got a lot more from the show than I did, cool. Glad to hear it filled you with FEELZ and stuff.

Yuri and Slice of Life are my anime passion.
View all posts by OG-Man →
This entry was posted in G-Views and tagged Celestial Method, Koharu, Noel, Nonoka, Shione, Sora no Method, Souta, Yuzuki. Bookmark the permalink.