Warning! The comments section of this review will contain SPOILERS. It is recommended to skip past posted comments unless the reader has also watched both seasons. This is Selector Spread WIXOSS. 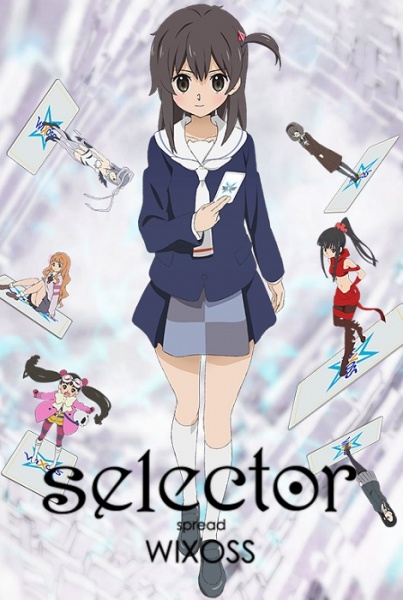 Plot Summary: After the events of Selector Infected WIXOSS Ruko and the gang try to recover from said events but both a certain girl along with another ominous figure have no plans of sitting idly and let it go. The games had just begun and what was already a twisted game will become even more twisted as more will be revealed beyond the truth of Selector battles. Can Ruko and her friends overcome the approaching darkness?

The same girls from last time return but as explained in the summary things have changed… and not for the better. The second half is like the “answers” part of a series. Everything, or as much as the show could explain in the span of twelve episodes, is revealed and explained. Whether said revelations and explanations are satisfactory to viewers depends on their mindsets and how much explanation one needs in order to be satisfied. I will put it this way, even if some of the explanations and revelations do not make sense to some, what viewers are given are not out of the realm of possibility as far as the show is concerned. Basically 99% of what is revealed can be explained but again it depends on whether the viewers like what they see and hear.

One thing I can say without a doubt about Spread compared to Infected is that everything was ramped up. The drama, dark themes, intensity of BATORUS and of course…the yuri. More on that in a bit.

The flow of the BATORUs remain unchanged aside from the aforementioned ramped up intensity. Viewers will still have little to no idea how to play WIXOSS after watching Spread but like last time it is more about what the LRIG and Selectors are going through during BATORUs. They are short but each one packs a wallop and has meaning behind it.

For everyone who thought Infected showed a disturbing side of humanity once they watch Spread…hooooooooooo. Y’all ain’t seen nuthin’ yet. Not just dark but Spread shows that some people are just plain evil by nature. Yeesh! When certain people are driven over the edge, THEY ARE DRIVEN OVER THE EDGE!

The animation and music remain as effective as they were in the previous season filling the show with several moments of dread and few chances to breathe sighs of relief. I personally find the Spread OP and ED better than Infected.

Of course everyone who was in Infected returns in Spread and have their moments of development but to me the breakout stars of the show are Chiyori and her LRIG Eldora. Two people who only had less than 10 minutes of total screen time in Infected were fleshed out to the fullest in Spread and what I initially saw as a token loli/genki with her “straight man” partner became a duo I would love to spend time playing and hanging out. I love these two that much. Oh and it is not just because Eldora is voiced by the great Satomi Arai.

Infected had its fair share of subtle (yeah, subtle) yuri moments but remember when I said Spread ramped things up? Yeah there’s a reason why this show’s Grade went up from 4 to 3. Might as well drop the subtle act. Basically the yuri had both steamy and poetically romantic moments…an yes the poet is the same character but she’s not the only source of yuri this time.

Overall Selector Spread WIXOSS was a (mostly) fitting followup to the impressive Selector Infected WIXOSS. The stakes were higher and everything was ramped up to the max. However for viewers who did not enjoy the first season much or at all I cannot guarantee the second one will change their minds even though I personally feel Spread was better than Infected.