So it finally happened on October 8th, 2014. Hatsune Miku’s American network television debut. It took place on The Late Show With David Letterman. I’m here it was to discuss how the show and performance went along with sharing my own thoughts on the Vocaloid software series.

The performance itself: “Share the World”. It’s a song about how the Vocaloidians helped make Mikumania the Japanese juggernaut it is today. Personally I hope they will also help Vocaloid at least become a bigger “trend” than just niche in the West.

Ignore the red text if you want to get to Miku.

Before discussing the performance a little rundown of the show that night. The show’s guests were Anderson Cooper talking mostly about Ebola, Isis and David asking how worried should Americans be over both of these and some other stuff. Then it was Gina Rodrigues talking about herself and how she uses fear to motivate herself every day. David became entranced when she mentioned going skydiving once. Gina’s biggest fear involves being strapped. She also promoted Jane the Virgin.

Personally I think Letterman is at his best while interviewing guests. His standup-warmup is weak, below Jimmy Fallon’s. My fav talk show hosts are Jon Stewart, Steve Colbert, Conan O’ Brien and Craig Ferguson. I look forward to seeing what Colbert will bring to The Late Show when he’s eventually passed the torch sometime in 2015.

Alrighty. Time for the main event.

When I tuned in the news broadcast ended with the woman referencing tonight’s Late Show guests being Anderson Cooper and a musical performance by Hatsune Miku (Hatsoone Mikuw). On the show itself David didn’t mention her at all until it was her turn to take the stage. This is how David introduced her.

“Thank you very much and here we go! Oh boy…Now listen to me. Our next guest is a computer generated Vocaloid personality from Japan and she is here in support of her expo in New York and Los Angeles. Ladies and gentlemen, please welcome, making her network television debut, Hatsune Miku (Haht-Suhnei Mikoo, is how David pronounced it.)” 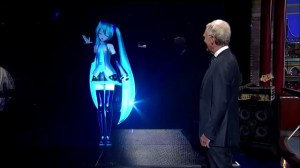 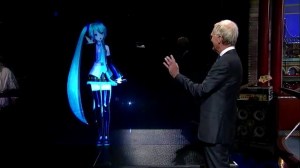 Dave’s reaction after the song and greeting Miku:

“Hatsune Miku ladies and gentlemen! Thank you. Okay. There she is. Alright that’s fine. (Miku then uses Sheik’s Vanish technique). It’s like being on Willie Nelson’s bus.”

Basically it went as well as I had hoped.

She was basically treated like a person in their first rodeo and because this was her American network television debut (along with her first exposure to mainstream Western soil was being the opening act for a Lady Gaga concert), it made sense. She’s basically starting all over again in expanding her Western audience beyond only animeniacs. 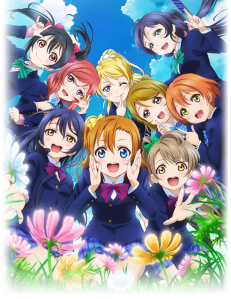 My personal liking for Miku and everything else Vocaloid is similar to my liking of Love Live. I really like both but my knowledge of each series is limited. If one were to ask me what is my favorite μ’s song or what is my favorite Vocaloid song and by who…I would have no idea. My knowledge of LL goes as far as the 2 season and 1 movie anime series and Vocaloid I only know some of the characters. It wasn’t till recently I learned there was an  young adult male Vocaloid and a sexy young adult female named Meiko. My fascination with Vocaloid, and almost every other Japanese song in existence, is not for the lyrics but in the rhythm and the way the singers perform the songs. I am content with seeing the Vocaloids sing, dance, listening to the music and being totally lost in their magical performances.

I first discovered Miku and everything else Vocaloid after I stumbled upon her rendition of “Ievan Polka”. Again I didn’t understand a word but the rhythm and her singing were what drew me in. I think the second song I’m aware of and greatly enjoy is The Black Rock Shooter theme. I’ve also played some doujin games the Vocaloids appeared in such as Mikuman X. 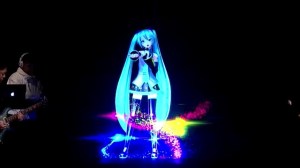 This goes back to Miku’s Late Show performance of “Share the World”. I barely understood anything but I still greatly enjoyed it. What also made it special was that I intentionally went to my mom’s room as she was reading the bible before going to bed and we both saw the performance. Mom simply watched with confused eyes and asked the following: “Why do you like these dolls?”. I answered her by saying that I could not explain why I liked them. I just do. She watched the rest of the song and understood my response as the life lesson I am about to give. 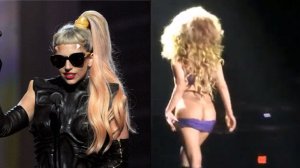 Enjoying Vocaloid is as much of an acquired taste as for example, auto-tune, Lady Gaga, country rock, Flo-Rida, boy bands or indie bands. Each person on this planet has their own tastes in music and everything else. Whether newcomers who you introduce to something they have never heard of before will understand and like it, such as Vocaloid songs, depends on how open-minded the person is and their own personal tastes. My parents for example enjoy old school music from the 50’s to early 90’s. So do I but I expanded my tastes with some rap, a little bit of hip-hop and most of all, anime music. It is, however, not right to misjudge people for the type of music or media they enjoy. While I am guilty of sometimes doing so I do my best to correct that mistake and not repeat it. These days I mostly question pessimists but that’s another topic.

For an interesting look and analysis of Vocaloid lyrics check out yet another awesome editorial by Deluscar’s King Kai:

Also here’s a video explaining more about the phenomenon that is Miku Hatsune and the entire Vocaloid series.

Yuri and Slice of Life are my anime passion.
View all posts by OG-Man →
This entry was posted in Life Lessons and tagged David Letterman, Hatsune Miku, The Late Show, Video, Vocaloid. Bookmark the permalink.