Parting with greatness is such sweet sorrow. This is Hanayamata.

Plot Summary: Terminally average Naru borders on underachiever status and she has few interests. Things change when she meets up with Hana, a very energetic and outgoing American girl who is fixated on forming a club dedicated to yosakoi, the traditional form of Japanese group dancing.

The simplest way to describe yosakoi is that it is Japanese freestyle rhythmic dance in the same vein as shogi is Japanese chess. The show covers the basics of what yosakoi entails but aside from the beat and dance steps the general idea is similar to other forms of freestyle dancing across the globe. I explain little about the yosakoi portion for a simple reason. The thing is that while Hanayamata’s theme is yosakoi it is primarily a character driven show. The main goal is to form a team and compete in the “insert tournament name here” but the show mainly focuses on the characters, their ups and downs, their romantic moments with their respective girlfriends/love interests as they face many challenges before all coming together and finally being ready to enter the tournament.

Like any other “cute girls doing cute things” anime Hanayamata’s strengths lies in its main cast doing whateveer it is they feel like doing while being as adorable as humanly possible. What makes Hanayamata special compared to many other beloved moerific shows is that while the moe level is set to high, akin to K-ON!, the show can still be taken seriously when it wants to be, also likethe aforementioned undisputed champion of moe. In fact I feel this show tackles several interesting topics that very few other shows of the same subgenre ( perhaps even main genres) with dramatic elements have covered. Also it is not forced. Simply put, “THE FEELS!” is a recurring tagline during the more dramatic parts of the show. These moments are THAT powerful. Then again it also depends on the color and size of the viewers’ hearts.

A strong theme throughout the show is people suffering from loneliness and whether it’s best to push onward alone or accept the warm hand of friends who wish to help one find the happiness they seek. It’s actually an interesting question to ponder at one point or another in a person’s life. Once again I’m plugging one of King Kai’s well written editorials. Check it out later: Hanayamata

The powerful Hana-Slam which was sadly banned because of how “cheap” it was.

Having said that at its core Hanayamata is a sweet, puffy and amusing show where cute girls do cute things and shower the viewer with BUTTLOADS of memorable moments. It is difficult to explain but in Hanayamata the aforementioned slice of life subgenre’s charm is at an all-time high. Maybe because the seiyuu put in a lot more effort in making the characters sound as cute and charming as possible. Not saying other shows haven’t done the same thing as effectively, it’s just more noticeable here.

The animation quality, holy cow. The show is an absolute marvel regarding simple aesthetics. While a show like Space Dandy’s animation revels in creative character design, Hanayamata shows off its visual strength as a bright, sparkly, wonder filled and awe inspiring marvel both in scenery and character emotions. Basically it’s eye candy for the soul. I suppose a minor nitpick is that several of the yosakoi performances felt “cut” in places. It’s kinda complicated to put in words but during several of the dance numbers many still images were used which made it feel like the writers were teasing the viewers “Godzilla style”. “Oh you guys want to see the whole performance, let’s tease you all with some cuts and still images instead while giving you small snippets of the epic dancing”

The soundtrack is easily one of my all-time favorites of 2014. There isn’t a single tune that didn’t fill my ears with bliss.

As usual in these kinds of shows the whole cast is likable so I will mainly focus on discussing the five leads:

For everyone who followed my episodics, Facebook posts and tweets it should be no secret that Naru is not only my favorite character on the show but also my pick for cutest girl of 2014. Where do I even begin praising this sweet bundle of cuteness that grows from being a pessimistic cutie to an inspirational cutie who wins the hearts of all female adolescents around her, especially a certain tsundere. Or should I talk about her sick naruko wielding skills? Or how about her believing in aliens? I could go on and on…

Next we have the resident tsundere Yaya who inherited her sex appeal, brains and impressive musical skills from a certain other person attending a Catholic school with the same name as her. Despite her popularity and ability to become a superstar there is only “special desire” in her mind. One “special desire” that is the reason for her being when she isn’t focusing on her future…I daresay this “special desire” is part of her planned future.

Next is Tami, the resident ojou-sama of the show and possibly one of the most popular for good reason. Similar positive traits as Yaya except she’s not a tsundere and already has her “special desire” in hand. Is famous for having a smile that can easily melt the hearts of millions. 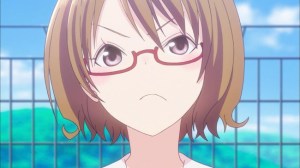 Machi has a similar role as another kaichou, Eli from Love Live! and is equally as difficult to recruit. Main difference is her cute side is revealed much quicker. Otherwise her relationship with the vice president is similarly cute and heartpounding.

Lastly we have the energetic leader of the group Hana. As far as American characters in anime she’s one of my favorites. She also dared to be bold and break new grounds by having TWO “fangs” in her mouth instead of the traditional one. Sadly there was some initial controversy against her because of her voice but that’s the usual internet complaint against girls with high voices. Nothing new. At least some newcomers will now be aware that her voice is high. Other than that she’s a high spirited cutie who rarely stops smiling because when she isn’t smiling or cheerful it means something very serious will happen.

The show used to be a Grade 1 but after a long period of deliberation it got demoted to Grade 3 because the love power, while clearly there, wasn’t as intense as in Kiniro Mosaic or even Locodol. 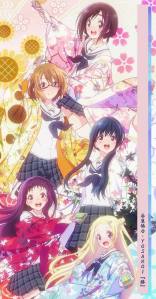 Overall Hanayamata is easily one of my top shows of 2014. It may seem like a basic “CGDCT” SoL subgenre anime but give it time and it quickly becomes something more. As usual when it comes to these kinds of shows, female centered SoL fans and open-minded SoL fans or fans who will watch any genre will easily get into this one. Those who do not won’t. Unless readers are new to my reviews my recommendations for these subgenre has always been the same. I don’t know how many times I can change the words to make it sound different. By now my fans who have yet to pick Hanayamata up can already tell whether they’ll like it or not.