I’ve waited a long time (Since 2010) for a 100% yuri (Grade 1) show (12-20 episode run) with as few restrictions as this one. The big question is was it worth the wait? This is Sakura Trick. I suggest grabbing some popcorn. 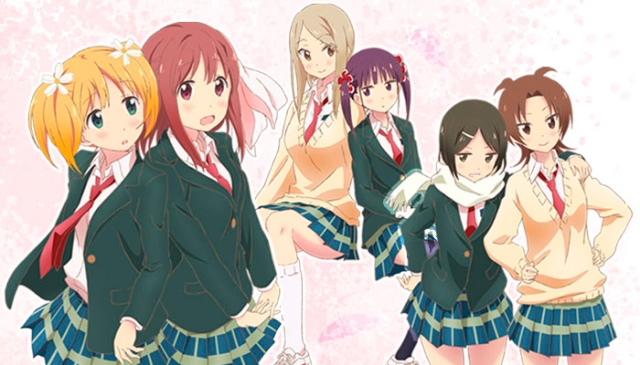 Plot Summary: Haruka Takayama and Yuu Sonoda were inseparable during middle school, but upon entering high school, they end up being seated on opposite sides of the classroom. Having to spend time with more friends, the two decide to make their relationship special by kissing each other in secret. 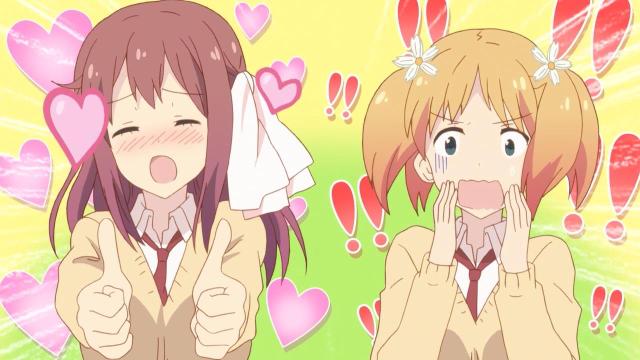 When I first picked up the show I was looking for an anime with yuri as its central theme with the following conditions:

In short, a yuri anime with no strings attached whatsoever. ST delivered.

ST’s anime adaptation is very faithful to the manga adaptation with each episode covering two, sometimes three, chapters accurately with a few neat extras. Depending on the viewer this can be seen as good or bad, like most things in life. 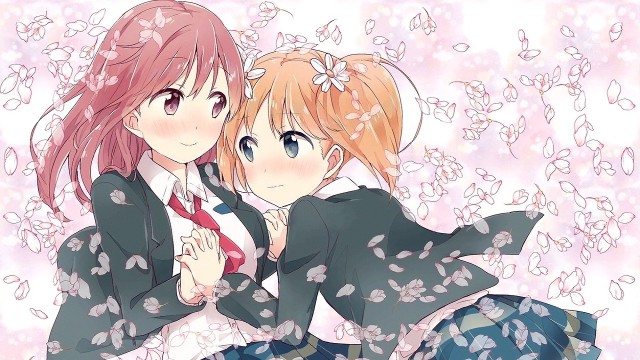 Explaining Sakura Trick’s appeal can take a while but it is very easy to understand. It is more than a show with cute and sexy girls frequently kissing each other. ST takes a lighthearted yet serious enough approach to telling a tale of first love/young love. ST does away with the process of two people hooking up and instead focuses on the progressing relationship and the growth of the girls’ feelings for one another. It does still use the classic “chase” formula the mainstream enjoys so much with a certain third protagonist but focuses on the already established relationship(s), mainly that of Haruka of Yuu.

Haruka and Yuu’s relationship starts off as one of “best friends with benefits” but as the show progresses their feelings for each other grow stronger and stronger each passing week. Haruka already has a crush on Yuu from day 1 but it doesn’t take long for Yuu to also develop a mutual attraction for”Harupopo/Haru-Poppo”.

Every episode shows progression in their relationship, no matter how simple or mundane their activity, from making out in empty classrooms to going shopping together. Their kissing also plays a pivotal role in the storyline as each kiss shows the two growing more comfortable with one another. Their first kiss shows inexperience and as they progress they get more sensual and…into it shall we say. They don’t “cross the line” though.

Despite all the girls following an “anime girl stereotype” all the couples’ interactions feel natural and believable. That is the key to making a good yuri rom-com imo. There can be silly moments here and there but as far as the interactions go, the viewer has to believe that the girls legitimately care for one another. THAT is key and ST pulled it off very well.

Although I spoke a lot about Haruka and Yuu’s relationship, there is a second important couple on the show with their own developing romance in Kotone and Shizuku. They have a “slightly” more drama driven relationship. Unfortunately their relationship truly is secondary as they do not get as much focus as fans would have hoped. Oh they do have several great, impact making moments together but they definitely could have used some more. What we did get from them was pretty good. The manga also doesn’t cover these two as often as one would like so it’s not the anime writers’ fault.

Back on the topic of first crush/love. The show, as mentioned, presents this romance in a lighthearted yet believable way. Early on in Haruka and Yuu’s relationship it is clear that they are more like girlfriends than lovers. The show creates a sense of exploration in the field of the first crush. What does it feel like to be together with the person you like? What kind of thoughts go through the two people’s heads? Do they both understand what it means to be in this kind of relationship? Are they willing to take the next step? All of these questions and more go through the minds of both couples and the viewers as the show progresses.

This face pretty much defines Mitsuki. I LOVE this face! Everything one needs to know about Mitsuki’s role in this show can be explained with this single facial expression.

Mitsuki Sonoda, Yuu’s older sister is the unofficial third main character of ST. The episodes where she gets a lot of screen time are also important because of both her role as a sister to an initially unbeknownst to her lesbian sister and…her own blossoming feelings. Her perspective is that of a girl who is slowly learning what it’s like to be who she eventually becomes AND accepting this path so her role is not a waste.

Lastly we have the “dynamic duo” of the show, Yuzu and Kaede. Yuzu’s the straight girl of the team and the one who tries her hardest to remain sane. Kaede is a prankster with very sharp eyes and senses. Aside from being the “subtext” (Fans really want these two to officially hook up) pairing their role on the show, especially Kaede’s is one of an observer. Let’s leave it at that.

I stand by this belief that if the cast were to be divided in half between boys and girls with the same premise, the story would be similar. From personal experience and knowing people who have been in this kind of relationship, heterosexual, mind you, the relationships all these girls have with each other can be applied to ANY couple with any sexual preference.

For newcomers who see this as a spoilerific review, it’s not because the EXCELLENT anime OP pretty much establishes most of the girls’ relationships on the show.

Speaking of the OP, I love ST’s soundtrack. It’s no academy award worthy masterpiece but it fills my soul with absolute joy listening to most of the tunes this show has. If one looks for the lyrics of both the OP and ED, one can see that they’re both love songs sung by girls directed towards each other.

The presentation and animation style are like an updated Hidamari Sketch. The queues and flow of how the story is presented is vintage Hidamari Sketch. Whether that’s a good or bad thing again depends on the viewer.

The last thing I want to cover is the fanservice and the controversy behind it. I mentioned in my episodic coverage that the ST viewers were divided into 4 groups in regards to the fanservice:

B: “Makes me cringe but I’ll keep going” (Know some people who are in this one)

C: “Eww.” (Also know some people in this group. coughfoxyonecough)

D: A group that is out of touch with the times. (I’m intentionally biased against this particular group)

While I am part of group A I’ll share some minor thoughts on the subject. The reason the fanservice didn’t bother me much, besides the fact I enjoyed it, is because I knew it was coming after seeing Haruka and Kotone’s character art and because contrary to negative opinions it didn’t hinder the show much, was mainly used for its intended purpose and was not abused during serious/intimate moments.

Still, there are some who cannot stomach the fanservice, though there are shows with far worse use of titillating content but that’s not the point. Point is it bothers some and I suppose recommending the manga would be the next best thing as the anime faithfully follows the manga chapters with very minor changes.

For more details on the ST fanservice thing, check out Sorrowneptune’s post for a woman’s perspective on the matter.

Overall Sakura Trick surpassed the hype and gave yuri fans 4 years worth of yuri goodness in 12 episodes. Whether the show will sell well enough to green light a second season is unlikely due to yuri being a niche genre but one can hope it’ll succeed. For yuri fans who enjoy both slice of life and lighthearted fluff whose romantic content can be taken seriously, this show is definitely worth watching. Viewers who are very sensitive to fanservice in any shape or form but are still curious about the hype can check out the manga once the chapters are translated. For detracting yuri nation members, I sincerely hope (as of this writing) that Akuma no Riddle will satisfy their needs.