Not much to say about episode 10. Yuzu was in super mega hyper mode, Yukari was full of love and Miss Mom was as beautiful as ever. That’s all, although Yuzu is still pretty high this week as well. Let’s see what episode 11 had in store?

Yui greets a clumsy Ai-chan and wonders how she survives with her large breasts. Oh, and Ai-chan tries desperately to subtly hold back her desire to snuggle with Yui, especially after Yui told her how sensitive her body is. Oh, and Yuzu and Yukari wanted to get Ai-chan wet. 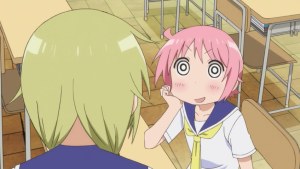 Why are the show’s facial expressions so hilarious to me? 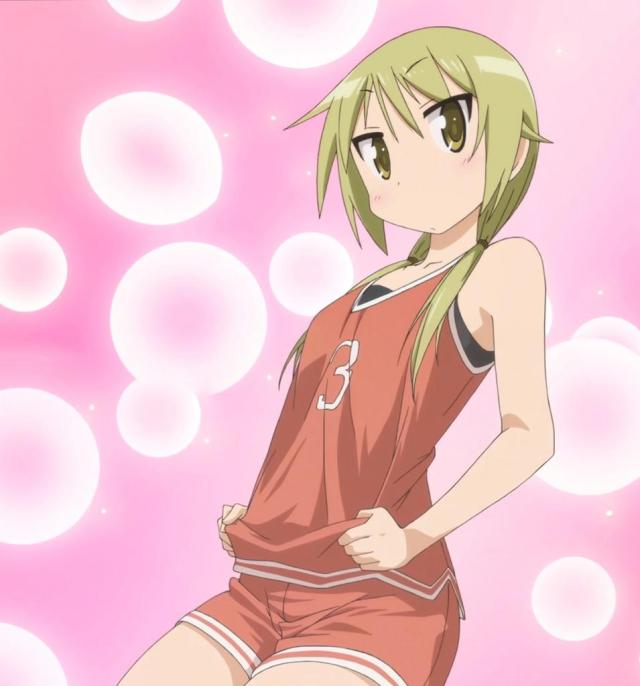 And my photographer delivers.

I suppose if I were to ask my employed photographer, he could easily take a full picture of Yui in her white bikini and basketball outfit. The thing is, her body’s not ripe enough to be raging otaku boner worthy…yet.

Ai-chan got hurt during a basketball game.

Yui probably took her to the nurse’s office off screen and had a “Hanabira Moment” with her.

Ai-chan gets some snacks from her posse.

Yukari is willing to use “psychic powers” to injure Yui’s hand and spoil her because it’s cute to spoil Yui. 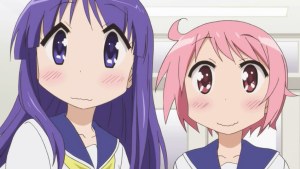 You are all free to interpret what these two got from Yui’s attempt at a logical explanation.

Instead of wasting time praising Miss-Mom’s infinite beauty and cuteness, I’ll skip to the scene where the girls talk about side-jobs and their futures after finishing high school and stuff.

Next week, maybe, just maybe, what I have been wishing for weeks will finally come true.

Yuri and Slice of Life are my anime passion.
View all posts by OG-Man →
This entry was posted in Episodic Anime posts and tagged Ai-chan, Kei, Mom-Sensei, Yui, Yukari, Yuyushiki Episode 11, Yuzu. Bookmark the permalink.