Yuri Talk: Kimochi no Katachi (Spoiler Warning) and the fear of a judgmental society

This is a follow-up to bring forth a point and also trying to discuss a matter that I figure others have talked about before me. Still, I feel like I should at least add my 50 cents. Think of this post as a follow-up to the Kimochi no Katachi review where I go into more details on why this manga is more than fun, it is actually meant to be a fluffed depiction of a harsh reality that homosexual teenagers face. Their are other manga and media that also talk about this subject in their story but for now, I will use KnK as an example.

Warning! This post not only contains manga spoilers, but may also feel preachy.

I recommended to avoid reading the first chapter not just because it spoiled the end results, but also because it was a rainbow colored curtain to soften the mood before tackling the REAL message behind the manga. Chapters 2, 4 and 5 are what I consider the most important chapters in the series. 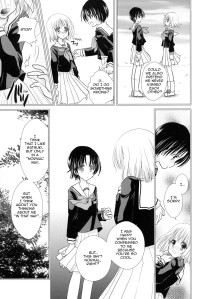 You see, the main reason Satsuki initially had great difficulty accepting her lesbianism was because of her first crush’s rejection. She rejected Satsuki because while she was okay with being her friend, the thought of going out with another girl disgusted her. This rejection scarred Satsuki. 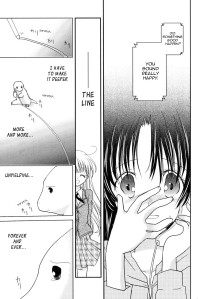 She created a symbolic “line” that she dared not cross so as to avoid showing her true self, giving in to her true desires and be harshly misjudged by her peers because of said desires. As for the lizard, Satsuki related to her (it’s a female lizard) because said lizard was also shunned by the other girls because they thought she was gross.

Things became more difficult when Satsuki had developed a crush for another girl, that being Kano. Satsuki’s best friend, Mana, encouraged her to tell Kano how she was too scared to experience another rejection and more discrimination, choosing to deny and fight against her feelings, refusing to cross “the line”. 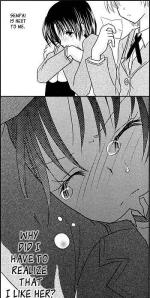 Although Satsuki eventually did cross “it” after realizing her feelings for Kano were strong, she was still too scared to confess. It hurt her so much that when the opportunity to confess to Kano was right in front of her, the conflict between her love for Kano and the fear of possibly being hated by Kano for having such feelings for her brought pain to Satsuki’s heart. Only when Satsuki was backed into a corner she could not escape from did she finally muster up the courage to confess to Kano. Thankfully, Kano had also developed feelings for Satsuki and eventually both gathered the courage to confess and finally be together, in secret from everyone other than Mana, of course.

I also see the character of Kano as that of “hope”. What I mean by this is that no matter how difficult the road to finding love is for many young lesbians, there is hope that they will find a girl like Kano out there who will accept their feelings for them (and possibly also have feelings for the lesbian in love as well). Who knows? That love interest might also be a girl who likes anything and everything and the lesbian ends up being the girl to show her what it feels like to REALLY have amorous feelings for a person.

The point I want to make is that the pain Satsuki went through and “the line” she created to protect herself from the glaring eyes of bullying and discrimination, there are people out there who are going/had gone through the same experiences she did. It is not just women, but men as well. They hide their sexuality from the world to out of fear and protection. It is not easy to…”come out of the closet”, so to speak. The lives of lesbians, gays, bisexuals and transsexuals are all difficult. Despite parts of the world slowly becoming more accepting of the LGBT community, there are still many who shun, bully, discriminate and deny them of their human rights. The LGBT is just as deserving of human rights as so-called “normal” people. The definition of what normal is has been vague and subjective for a very long time.

What makes any member of the LGBT different from other people? Why is it considered wrong for people to be attracted to, fall in love with and marry someone of the same sex? Is it because it is supposedly against the laws of religion, or are many people just homophobic in nature? People cannot control who they fall in love with, be it the opposite or the same sex. It is not always because of traumatic pasts, it could very well be because the person is attracted to or feels more comfortable around people of the same sex.

People need to realize that no matter who you are, where you come from, what you like and dislike, who you are attracted and whatever other reasons some people look for to bully others, bullying in any shape or form is wrong, even if it’s just teasing. Words and actions must be chosen wisely, otherwise, who knows what kind of emotional damage it could inflict on the victims? Not everyone in the world is strong enough to overcome bullying, discrimination, persecution and prejudice on their own. Who knows how many LGBT are victims of these heinous acts besides the ones shown in research graphs?

I repeat, the LGBT community have the same human rights as so-called “normal” people.

7 Responses to Yuri Talk: Kimochi no Katachi (Spoiler Warning) and the fear of a judgmental society