Greetings Haunters of the night. It’s once again time for a G-View. Well, here it is, the last of what I like to call the “sci-fi yuri pentalogy” (Symphogear, Last Exile 2, BRS TV and Mouretsu Pirates). While the previous four were all enjoyable (one of them becoming one of the best anime I’ve ever seen), will this last show live up to the greatness paved by its counterparts? 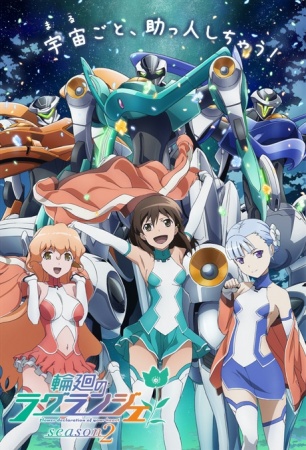 Alternative Title: Lagrange: The Flower of Rin-Ne
Genres: comedy, science fiction
Themes: mecha, school
Number of episodes: 24 (split into two seasons)
G-Rating: 8/10
Plot Summary: Madoka is the lone member of her school’s Jersey Club. She is one day recruited by a mysterious girl named Lan to pilot the robot “Vox” and protect her city from space invaders. They are joined by a third girl, Muginami, who has a different goal than Ran. Meanwhile, they still don’t know their enemies’ true goal, or what “Rinne” might be. 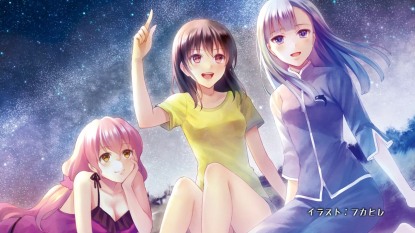 I’ve made it clear I normally don’t like mecha anime…but there are exceptions. How do you get a guy like me to watch a mecha show? It must contain a majority of the following: It has to be funny, have (a) cute/hot girl(s) as the protagonist(s), as little angst as possible, a plot that isn’t necessarily difficult to follow or creates debates online, pro wrestling, MILFs, memorable quotes/poses, likable cast and of course…yuri. All of this is what you can expect when watching Rinne no Lagrange.

Now the classic mecha anime traits do appear, such as angst, politics and weird stuff that help define the term anime logic, but thankfully it’s somewhat toned down compared to other mecha shows. In a sense, it’s a mecha show mixed with school life. Speaking of school life, time plays a prevalent role on this show, as the past, present and future have an effect on both the show’s main plot and what the cast want to do with their lives once peace has returned to the galaxy. It’s made more prevalent in the 2nd season. The show has its serious moments when the plot calls for them. It isn’t a tale of souls and swords, eternally foretold, but thankfully it isn’t “Pop Pixie” either. 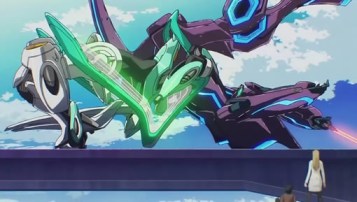 Being a pro wrestling fan, I was pleasantly amused by many of the fights involving Madoka as she pulled off some sweet moves on her enemies such as the German you see up here and an enziguiri, just to name a few. There are also the classic multi-mech brawls complete with transformations, lasers, beam swords and all that stuff that makes robattles a blast to watch. So yeah, despite the school life element, the show doesn’t disappoint when it comes to action scenes.

While it’s hard to tell whether Symphogear or Lagrange has the most apparent fanservice, this is just to let you know there’s fanservice a plenty. There aren’t many instances of bouncy boobies but there is Muginami and several shots of skin. Despite this fact, believe me when I say the fanservice is a bonus, not the main attraction.

All I’ll say about the animation, besides the ladies’ facials (especially Madoka’s) being cute, is that it’s flashy and colorful and I love me some colors.

The music: The 1st season’s OP is another one of my top 10 anime songs of 2012 and the rest of the soundtrack is definitely nice on the ears. 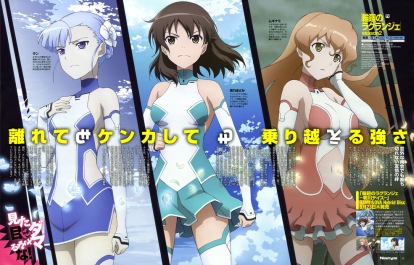 Characters: I’ll mostly talk about the protagonists because if I mention all my favorite characters in depth, I could be here all day.

Fin E Ld Si Laffinty, or Lan for short, is the girl in blue to the left. Long story short, a soft-spoken ,easily flustered ojou-sama who is most known for her trademark greeting:

Besides eventually becoming a great wrestler after a certain someone shows her the light,, like the girl on the right, she’s infatuated with the main character in the center.

Next up we have the girl on the right, Muginami, whom I affectionately refer to as “Cherry”. She’s the cheerful busty babe of the group who may seem carefree at first, but is really the source of angst in the 1st season. Thankfully it’s temporary and she quickly becomes more likable afterward, mostly due in part to the efforts of our main heroine.

I have to say that out of the three heroines, Cherry’s catchphrase, “Kashkomari”, is the weakest. 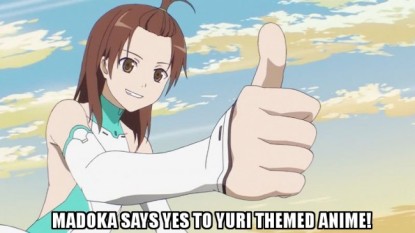 Lastly, we have MY kind of mecha show protagonist in Madoka, aka, “the super sexy defender of justice”. Madoka, in short, is the ultimate Social Worker, ready and willing to do almost any kind of task to help out the people in her beloved city of Kamogawa. As the leader of the Jersey Club and all around badass, she’s almost fearless, rarely mopes, is oh-so fine, has little qualm with having two female lovers and doesn’t really think things through. Basically, my kind of protagonist, next to Marika Kato, of course.

I think this refers to a perfect circle, signaling a job well done. Madoka’s “Perfect” catchprhase. 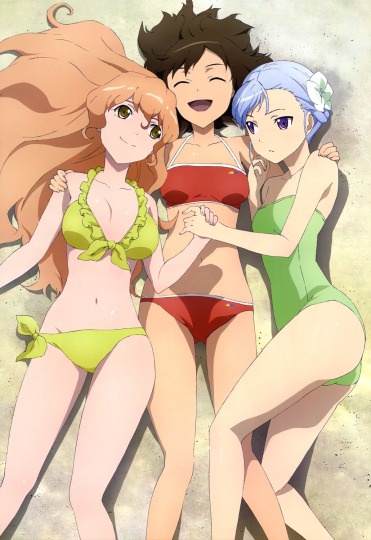 As always, the yuri discussion is saved for last. While the yuri is definitely present within our three heroines, I must sadly admit that it doesn’t develop as much as I had hoped. However, you will get plenty of touching moments. Be careful though, if you’re sensitive about bigamy-esque couples, you may have some issues with this one. Still, there’s another couple on the show but you’ll need to use your imagination with that one.

In conclusion, Rinne no Lagrange is meant to be a fun thrill ride filled with laughs, action and an acceptable storyline as far as anime are concerned. It ain’t a masterpiece but it’s by no means utter crap. Unless you’re a diehard mecha fan who sets his standards way too high, I highly recommend this show to both casual animeniacs who aren’t too picky about which anime to watch and yuri nation members.

Adult women are the best. “Drools”