A Kiss for the Petals 8: Dyed With an Angel’s Petals

The below emoticon expresses my thoughts on this game without having to read the review.

I affectionately refer to this couple as “The College Queens”, even though they’re only in the 3rd year of high school.

Most fans who have played through episodes 4-7 were probably expecting another couple with interesting depth and character development, were probably surprised to discover that the following couple went back to the basics, in a sense. 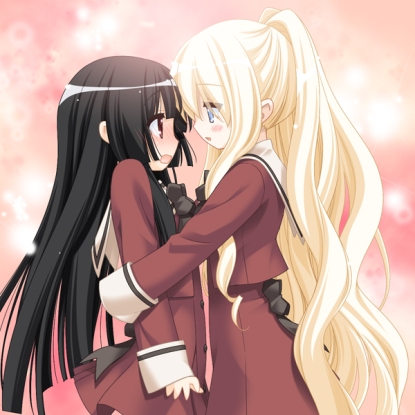 This episode follows the adventures of a Yamato Nadeshiko by the name of Shizuku Kirishima, a gorgeous hime cut beauty, who’s pretty good at many things, especially Japanese calligraphy and while idolized by all the 3rd years, she feels somewhat incomplete or bored, like something is missing in her life. One day, her life is turned upside down when a European transfer bishoujo named Eris Shitogi enters Shizuku’s class and immediately melts her classmates purity, innocence and tuna salads…well she doesn’t go that far. Shizuku is initially torn by her mixed feelings for this new beauty beyond words and her minor jealousy of said beauty stealing her mojo. Of course with this being an SH game, the confusion’s quickly resolved and one of the top 5 sexiest yuri couples is born. 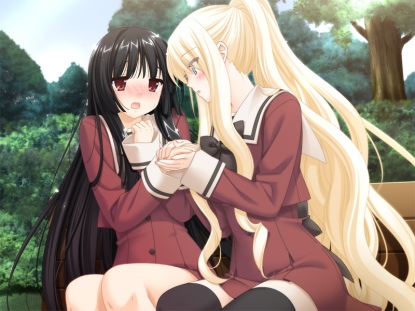 Before the EN Beta was even released, I had already been smitten by these lovely ladies. I simply imagined a curious tsundere dating Shizuma Hanazono’s super gorgeous half cousin. Years later after understanding what’s been said during their dialogues I’ve come with two descriptions:

Long one: A perfectionist who is intrigued by a beautiful Dutch girl ( I know she isn’t Dutch) and her vision of perfection is forever tainted after that meeting due to it being a struggle to remain perm while also trying to hold back her insatiable lust for Young Cheese. 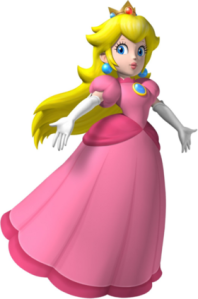 Not exactly but you get the point. 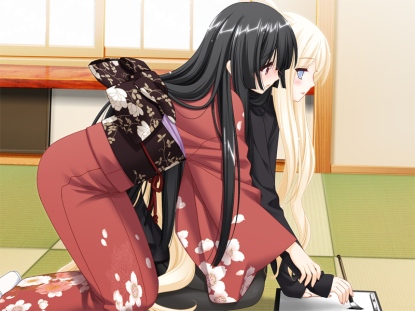 Back to the couple. It’s not all about two hot girls hanging out doing cute things together while periodically making love, there’s also an obvious “East meets West” motif. I’ve discussed this during my Ikoku Meiro no Croisee review,  but the short version is both girls being curious about their countries’ customs and traditions. “SPOILER ALERT!”, no ninjas appear in this game. Speaking of Ikoku Meiro… 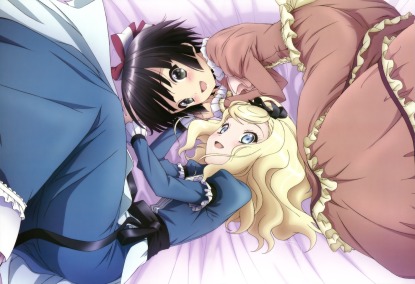 I labeled these two future lovers as the younger forms of Eris and Shizuku. After playing the game, you can all praise me for my stupendous powers of observation and foresight. 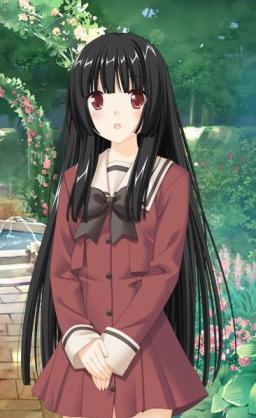 A running theme fans of the series have noticed is the usual pairing of a busty babe and a…not-so busty cutie. Shizuku is my pick for the absolutely sexiest not-so busty category. As mentioned earlier, Shizuku’s a perfectionist and won’t rest until what she’s working on is 100% perfect in her eyes, especially when it comes to trying her best to show her love for Eris without speech…which is one of her toughest challenges ever.I find it absolutely adorable seeing her overwork herself to confess her true feelings, almost as cute as Sara.

She’s also the star of one of the most dangerous drinking games in history. The rules are simple: Get a drink (Alcoholic or non) and pour a glass EVERY TIME Shizuku says or thinks the word “embarrassed”. Any form of the word is fine.

Next up, we have the sexiest busty babe in the series, Eris Shitogi. She’s a vampire born and raised in the Netherlands who learned all her Japanese facts and speech from her dad while her superpowers come from her mom. Her family also has relations with the Hanazano clan of Daywalkers. Eris could very well be the hungriest hunter as well. As for her nature, a laid back, powerful ladies’ lady who also happens to be an airhead. She’s somewhat similar to TOSHINOU KYOKO! She could be a masochist as well…or maybe just enjoys teasing Shizuku and being scolded by her. I dunno. Point is she’s always hungry. 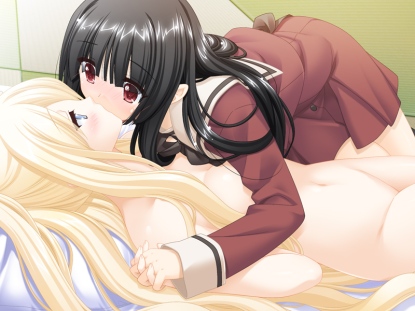 Out of all the “Prey Strikes back” moments in the series, Shizuku’s has to be one of the most delicious. I honestly had to take many breaks while “playing” this game. Otherwise, my smile would have been permanent. They’re so good together, in fact, that I’ll only show this scene to entice those who have yet to be awe struck by these two. They’re THAT good. Eris’ mastery of the suck is 100 times better than Mai’s. Hooooo BABEH these two are good!

In conclusion: What more can I say without making this look like a 5000 word essay. I…LOVE…THIS…COUPLE THE MOST! Sure their introductory story’s a simple one but it’s better that way, plus the excellence of its execution more than makes up for its simplicity. Shizuku’s a super adorable tsundere (Sexy and smart too), Eris’ elegance and thirst for bento are a deliciously hilarious combo and don’t even get me started on their lovemaking. It succeeds at everything and I can only hope both teh episode 10 patch and possible OVA (I BEG OF YOU!) don’t take another 2-3 years to be released.

Join me next time…it’ll be a most interesting discussion.

33 Responses to A Kiss for the Petals 8: Dyed With an Angel’s Petals