Greetings Haunters of the night. It’s once again time for a G-View. What can I say about singing idol/musical themed anime? You either love them, hate them or see them as just another genre. I’m more in the 3rd. If I like the girls or the show caters to my tastes then I have no problem completing it, which is how I felt after the 1st episode of the anime I’m about to review, AKB0048.

Before we begin, I don’t know anything about the real life group this anime’s based on, AKB48 but if you want to know as much as possible, both about the group and yuri goodness within it, visit Yuri-Goggles

Genres: science fiction
Themes: idols, mecha, music
Number of episodes: 13
G-Rating: 7/10
Plot Summary: At the start of the 21st century, an interplanetary war broke out. Earth’s ecosystem was damaged, and humanity was forced to flee the planet. In this new society, things that “disturb the heart” like music and art are forbidden. 48 years later, a legendary idol group is resurrected as AKB0048. Labeled as terrorists, they must take up arms to defend their careers and their fans.

Let’s get one fact clear here. The show is about a dystopian future where a communistic government, for some reason (The explanation in the plot summary can’t be the only reason.), banned all forms of entertainment across the galaxy and the ONLY ones who can bring joy and happiness and save the universe from boredom, is a group of female JPop idols. No videogames, comedy shows, exercise or even Chuck Norris movies, only pop singers who are trained in martial arts (Some of them anyway) and they combat heavily armored soldiers and mechs with lightsaber equipped microphones among other non-lethal neutralizing gadgets and their own battleship all while performing or protecting the performers. In short, Christopher Nolan’s Batman Trilogy this is not but I would rather watch this than a Katy Perry or Justin Bieber brainwashing glorifimentary.

Also, be wary of the fact this show has moe goodness a plenty. It isn’t K-ON level, just basic stereotypes. As the show continues through the episodes you see a good amount of character development, the bonds of friendship, determination, lessons being learned, and fears overcome. Heck, the show even tackles haters in a mild manner. While I do agree there are some haters out there who criticize performers because they legitimately want to see them improve, there are more who have nothing better to do than trash everything on television just because. Oh, and don’t even get me started on how the promotion system from rookie to successor works. While it’s simple to see how it goes on screen, explaining the process is another story. Let’s just say there’s a good reason why a second season was announced, because if the show were to end the way it did, we would have a lot of confused viewers who didn’t care about the fluffiness and legitimately wanted to understand what’s going on. In short, lots of unanswered questions.

And yet, despite all that, the show is both harmless and watchable. 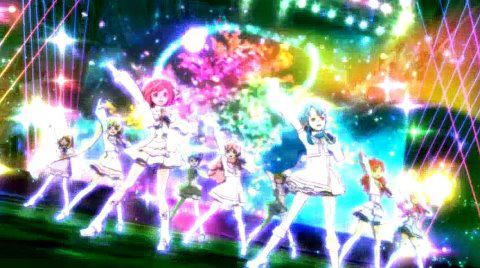 As you can see from the above picture, the animation is quite colorful, especially during the “song of the week” performances. It literally is the simplest form of emitting a bright light through the darkness on each planet. Like I said, dystopian future where most of humanity is miserable. The CG works fine. It isn’t breathtaking like Mouretsu Pirates’ but it gets the job done.

The music is mixed for me. The OST’s fine but the songs themselves…some I liked, others were meh. I guess I was spoiled by Symphogear and Last Exile 2’s soundtracks.

The cast, side characters aside, are divided in two divisions, senior (Successors) and junior (Understudies), which are further divided in sub-divisions, but knowing there are two main divisions is more than enough for this show. The point of these groups is to become successors of the original AKB48, or was it 048? I dunno but it’s something like that. Basically successors get the title of the original cast members. 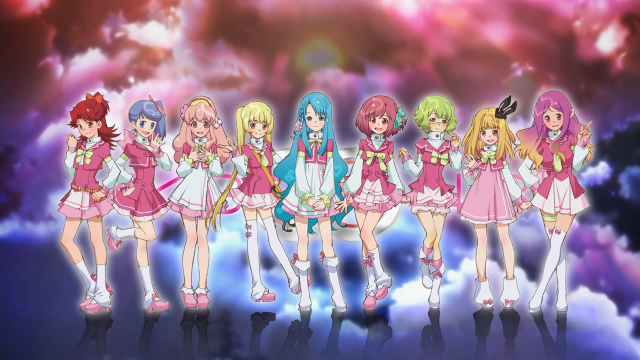 Obviously the story focuses on the junior division here. Instead of going through each one, I’ll mention my top 3:

Suzuko Kanzaki: AKB Fangirl turned understudy. Besides wearing glasses and me being a megane babe fan and all, Suzuko just has a certain charm to her that amuses me, especially when she gets REALLY involved in something. Oh yes. 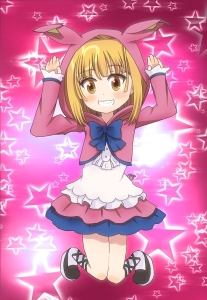 Sonata Shinonome: Youngest junior member, adorable, energetic and usually addresses herself in the 3rd person. I also strongly believe she is Suzuko’s destined partner. They’re already partners in crime so why not eventually take it a step further.

Kanata Shinonome. Besides being Sonata’s older sister and another reason that I’ll get to, she looks so badass when going turbo and is a competent leader for the juniors. 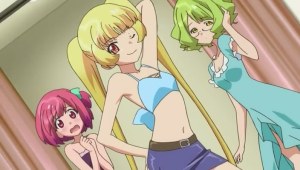 Nagisa and Yuka. I like both their voices and heads.

As always, if the show has yuri, I’ll talk about it before ending the review. AKB0048 has subtext galore, but there’s one specific couple that deserves the most attention, Kanata and the current Takamina successor. Their romance is the best and many nation members that saw the show will agree. I do hope other pairings shown this season will develop further the next. Either that or more KanaMina. 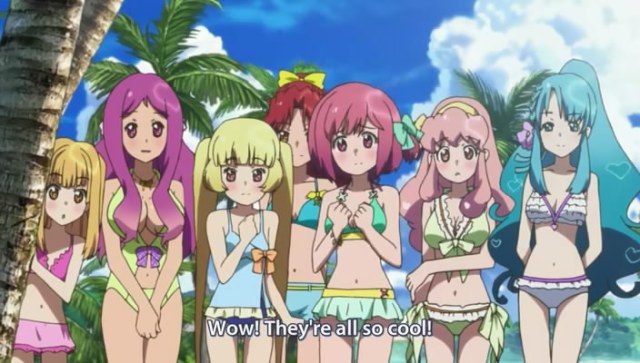 In conclusion: Some defined this show as “pandering”, I just see it as harmless. It’s kinda like a show about a moe singing jedi academy. You can tell before even reading this review whether the show’s for you or not but I hope to have at least encouraged some to give it a try. There’s a 2nd season on the way so why not see for yourself whether it’s worthy of a continuation or not.

Yuri and Slice of Life are my anime passion.
View all posts by OG-Man →
This entry was posted in G-Views and tagged AKB0048, future, idols, mecha, music, science fiction, war, Yuri. Bookmark the permalink.