Greetings Haunters of the night. It is time for another G-View. With the Blu-Ray release finally translated, it’s time to look at a movie I’d personally anticipating since its announcement. Lovers and haters, you all know who you are and whether you want to continue reading or not and also because my previous post was a bit of a downer, I needed some cheering up with some K-ON! The Movie goodness. How good is it? Let’s find out. Also, here’s my review of the main series.

Plot summary: The K-ON crew want to go on a post-graduation trip and decide on Landon, England. The main four agree to compose a secret farewell song for Azu-nyan before leaving for college.  That’s it.

There’s not much else to say in terms of plot or character development. It’s just the girls doing what they do best, which is doing cute things. only this time in London. Pretend like you’re in their shoes as a tourist traveling abroad to a new land for the first time and you can somehow relate to how the girls felt, except not as moerific. Everything you either love or hate about the series is here, just longer. Yui’s still an airheaded ding dong whose ability to enter college continues being a mystery, Mio still has petty fears and looks cute being scared, Ritsu’s still Ritsu, Mugi’s still curious about the wonders of life, big and small and Azusa still overworks herself being the level-headed member of the group and failing at it. At least she’s the most responsible. We do get to meet Sawa-chan’s old teacher and now co-teacher.

I guess the most consistent plot point is the group secretly working on composing their special song for Azu-Nyan, especially Yui. This leads to many obviously awkward moments between Azu-Nyan and Yui, which are also the source of yuri subtext between the two. Then again, Azusa and Yui are the 2nd most well known couple next to Mio and Ritsu, though we hardly get any cute moments between the latter couple. I do suppose Mugi and Yui agree on more stuff.

The animation, music and characters are all the same as they are in the TV series so there’s little point in going over many details. Although I will say they thankfully didn’t use the tired and cliche palace guards who are supposed to stand still gag. There was a silent cop but it lasted less than 5 seconds. I also liked how awesome London looked in animated form, especially the London Eye.

I have heard that there’s a super secret newcomer in Akane Miura who makes an appearance in the crowd of somehow popular side characters. Oh yes, the movie goes out of its way to make these famous instant second girls who were previously only noticeable by the visually sharp. Yes, their time to shine has finally come. Instead of milliseconds, they each get…3 SECONDS OF SCREEN TIME EACH! Oh, and the Movie exclusive songs, excluding “Light Fluffy Time” which is of course the signature K-ON song, are all pretty good if you enjoy the groups beats. If you don’t, maybe the Mio vocals will somewhat make your feet wiggle. 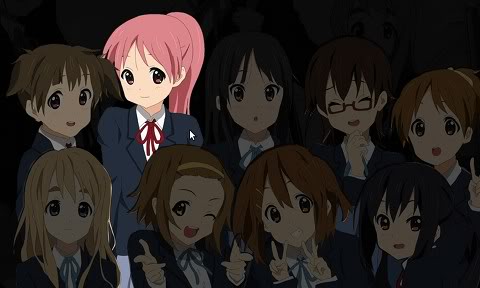 Akane Miura. Good luck spotting her in the movie.

I do have one main gripe with the movie’s ending. It felt abrupt to me. I mean, “spoilers”, they perform Azusa’s song near the end, then the four talk about some stuff about their college lives and then…it ends. Just like that. No post credit stuff or anything, just.. the.end. Weird. Oh well, I still liked it.

In conclusion: If you like K-ON, you’ll have no trouble enjoying nearly two hours worth of the group doing what they do best. If you’re not a fan but are expecting this movie to somehow shine a new light and make fans of haters, thisisn’t that movie. It’s more of the same, except it’s the length of a feature film.