Greetings Haunters of darkness and welcome to another G-View. I’m working on a third intro right now. I wonder how long it’ll last? Anyway, today we’re taking a look at a show whose main flaw is obvious from the moment you finish watching episode 3. This is Inu x Boku: Secret Service.

Plot Summary: Protected by the highest security, the Maison de Ayakashi is rumored to be haunted, where only eccentrics could live. In reality, it is a place for humans with non-human ancestors to live. The socially-inept Ririchiyo has come here to improve herself. She meets secret service bodyguard Soushi, who is assigned to protect residents. He has a request of her: “Please make me your dog.”

Right from the bat I should make one thing clear. As a romantic comedy, this show is a lot of fun to watch. As far as the supernatural elements go…they feel more like appetizers to a romantic stew rather than the most important ingredients. You see, while the humor and romantic elements are obviously there, the supernatural elements feel more like gimmicks: “Oh, these people are all half-youkai and have  lived miserable childhoods because of it.” That’s it for the most part. there are some action scenes where the gang faces off against enemy youkai but these are far and few and hardly worth mentioning. I suppose if you’re intrigued by some youkai you aren’t familiar with, the ones that appear here might entice you to look up more about them, I suppose.

Now on to the comedy portion, which was the best part of the show. Maybe it’s because it reminded of Working! and you all know how much I like that series. Another important factor to prolong the laugh track inside my twisted mind is the chibi-mode. It isn’t as long as Koihime Musou’s, but the random funny parts where the characters are chibified is much appreciated. The best way to describe this series’ non-supernatural half is as a super servant anime, similar to the likes of Hanukyo Maid Team or Black Butler. This show follows a formula where both master and servant are capable of defending themselves. 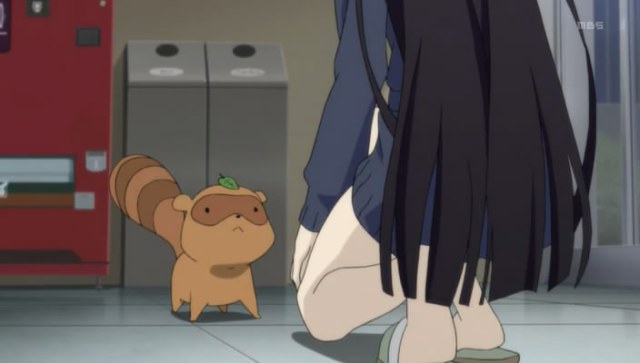 Okay, almost everyone but this guy’s DA BOMB! Macho tsundere at its finest right here ladies and gentlemen.

Well, time to talk about the romantic portion of the show. Surprisingly enough, I liked it. I am not known for being a hardcore hetero romance seeker but when it’s presented in a way that actually manages to get me involved, I’ll applaud it. I know some will gawk at Miketsukani and Ririchiya’s budding love but I thought it was…cute.Perhaps it also helped that I liked every single character on the show, even Mr S&M. He has the best ED song next to Roromiya.

I have a thing with this show’s cosplay and fashion choices. For a much better explanation on how good this show’s fashion is, head over to the yuri nation’s #1 fashion diva , who is harsher on the show than I am, but for good reason.

I already mentioned Roromiya and Mr S&M’s theme songs being my favorites, plus the OST is pleasant to the ears. Nothing spectacular but still neat.

What do I think about miss Ririchiyo, our main protagonist? Hmm, she reminds me a lot of the following girls: 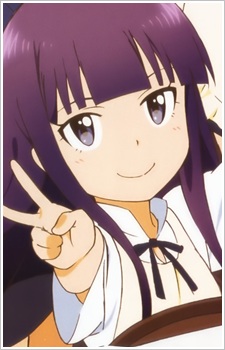 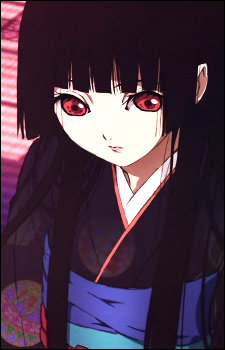 Even Enma Ai, sans the wet pants inducing eyes and when wearing a yukata.

Ririchiyo is a like a hybrid of Yamada and Kuroneko, except more tsundere-like. Actually, according toan anime stereotype encyclopedia blog (I forgot which), she’s a “tsunshun”. this basically means she often replies harshly and mean but often regrets her words later, or sometimes immediately, inside herself. There isn’t much I have to say. She’s cute, but not enough to seduce my manliness, as she’s often portrayed in erotic ways…in her room of course. Other than that, just a girl who has lived a secluded life and is having a hard time getting along with others for various reasons she herself must overcome but can’t without help.

As mentioned above, the tanuki dood is my favorite male lead simply because of his machismo and dedication for his lady love. However, it’s once again time to jump on the bandwagon and pick the obvious favorite, whom I have mentioned many times already:

You may think it’s because of the fact that despite looking like an absent-minded airhead with a bottomless stomach who understand nothing yet understands everything, or her youkai form, or her breasts. No, it’s simply because she’s part of my favorite anime girl archetype, the quiet, soft spoken and depressed looking girl. 95% of the time whenever there’s a quiet girl archetype in anime, it usually means she’s either the most adorable, most interesting or both.

As always, if there’s yuri, you know I’m the one to go to for that stuff, animated anyway. 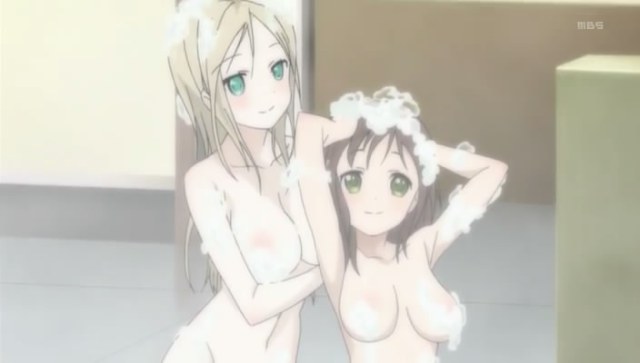 How should I describe Nobara Yukinokoji? Umm, think Haruka from Kanamemo, except with more self control and hungry for teenage girls and young adults rather than lolis. She’s clearly a lesbian but won’t make a move unless she’s REALLY hungry or is allowed to “touch”. In short, semi-harmless yuri fangirl whose youkai form has ice powers. Hot big breasted megane babe with ice powers = happy OG, IF…she had black hair…but sadly white and blonde are the more commonly associated hair colors with the cold.

In conclusion: I had a lot of fun watching this show. It’s far from perfect as it failed to deliver in the supernatural department. It tried combining both, but in the end youkai blood was just an excuse for drama rather than a main factor. Still, what’s important is that for those that approach this show, knowing that monsters and Japanese mythology aren’t important factors, you’ll get a pretty good funny super butler snuggle cushion show. Don’t expect too much and you’ll be fine.