Hey doods and peeps, welcome to another episode of The G-Views. After a near 2 year long wait for the 2nd episode to air, finally on April 30th 2012, the yuri nation bared witness to the long overdue conclusion. What we got was…something. Kuttsukiboshi review coming right up and BOY was this OVA set a doozy. 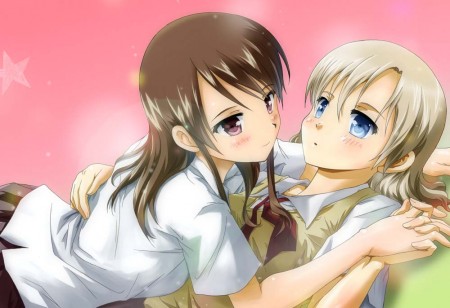 Plot summary: Kiiko is your normal girl, besides her secret of being able to move objects with her mind. When a new student named Aaya moves in, Kiiko starts to develop feelings toward her. The two will eventually then start their romantic relationship. Although everything seems fine, Kiiko does not know that Aaya has another secret, a secret that could ruin Kiiko’s feelings and trust for Aaya. 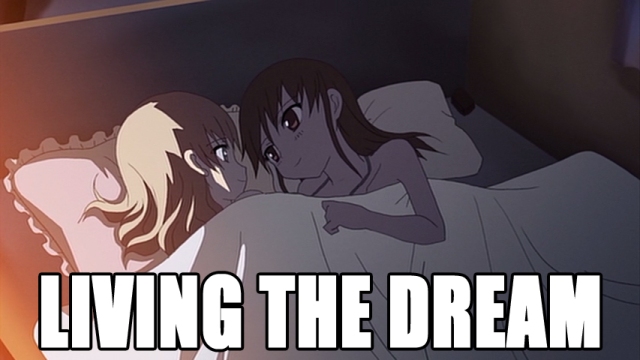 I promised many of my fans that I’d have a lot to say about this one, that I had a bone to pick with it but after SHiN–gx released the prototype fansubs, I was left kinda speechless for a bit. I quickly recovered and summed up that episode with one term: cop-out.

Let’s start from the beginning. It’s a reasonable enough story. Girl A somehow got psychic powers after a near fatal concussion (anime logic) and Girl B wants to help Girl A master them. They end up falling in love and spend most of the Summer eating each others’ chimmychangas, OHHHHHH do they chow down. However, by the end of episode 1…something happened. That one minute changed the face of the yuri nation forever. Okay not really but episode 1 definitely made a very controversial impression. It wouldn’t be till two years later (give or take) when we finally get the answer we seek and…let’s just say I didn’t use the term cop-out lightly. The very moment you read the 1st set of subbed words…you’ll cry foul. But as the episode continues, more pie eating goodness, possibly tastier than last time. Then we get a contrived setup on how the answer we’ve all been waiting nearly two years for is finally given…yeeeaaaaahhhhh. Anyway, the OVA ends like you’d expect any OVA this contrived would, by having anime logic once again reign supreme.

You know, I watched these OVAs both RAW and subbed and each time my impressions differed. My expression changed from amused to enraged in a matter of minutes after watching the ep1 RAW, the subbed version calmed me down a bit but still left me hankering for answers. The 2nd RAW aired and I was remotely satisfied and confused at the same time. The prototype subs were released aaaaannnnndddd…read the last paragraph.

Animation and music: 1st episode’s animation’s okay and the 2nd one improves it…by the same amount Nippon Ichi Studios improves a Disgaea sequel’s graphics, meaning not by much but the changes are there and are appreciated. The music is your “yuri+Classical music” combo. Like it or not, these two go hand in hand.

My thoughts on Kiiko and Aya’s relationship itself. Let’s compare them with another couple whose 1st OVA was released around the same time, Sono Hanabira’s Mai and Reo…hold your applause my brethren. I need not repeat my praise of that couple’s animated outing. In short, Kii-chan and Aya’s love isn’t as emotionally investing as the bodacious flirt and her vertically challenged grouchy lover.

Let’s talk about the two separately.

We have the brunette/purple haired Kiiko who imo comes off as a lovesick ditz that needs to take a stronger stand. No wait…she kinda does but it somehow didn’t feel like it. I guess she did okay but not by much.

As for Aya…words cannot express how much this kid’s actions baffled me. Yes, she’s obviously the more aggressive of the two but it’s just weird…I mean..wh..th…ch…you can never tell what’s going through this kid’s mind based on her actions alone. “What the heck” Is something I repeated more than once when it came to Aya.

In conclusion: I guess the main reason I called this OVA set a must watch for all yuri fans worldwide was because it’ll definitely leave an impression on those who witness to it. At first I was dumbfounded but later I just had a good laugh and smiled. “deep breath”. This OVA set, for better or worse, exists and we’ll just have to deal with it.

Yuri and Slice of Life are my anime passion.
View all posts by OG-Man →
This entry was posted in G-Views and tagged drama, Kuttsukiboshi, romance, Yuri. Bookmark the permalink.