I don’t know who drew this but it’s not bad at all. Though I’m more for MariAli or RemiKuya.

Well, I was actually planning on posting this a little later but so many others have posted their top lists for last year and I feel I’ve fallen behind again. Then again this list is pretty predictable so yeah.

2011 was a great anime year for me. So much awesome stuff. Keep in mind that I’m not known as a serious/hardcore critic type person. My mind is open and accepting of many kinds of anime. Rarely do I throw a raging behemoth type fit against anything other than male lead harem anime. That means my list will be much longer than most others. Whether you agree with some of my picks or see me as a delusional 24 year old who is far too kind is up to you. I also bragged about there being 20 anime I enjoyed last year but I didn’t have enough time to see and enjoy that many…for there were some that outright made my blood boil. Blah, blah blah, let’s get right to it with my favorite anime of 2011.

Why favorite and not top quality? Because I’m indecisive when it comes to best anime. As always, no particular order of least to most enjoyable.

Sit back and enjoy while listening to one the must inexplicably catchy video game songs of 2011 if you wish. 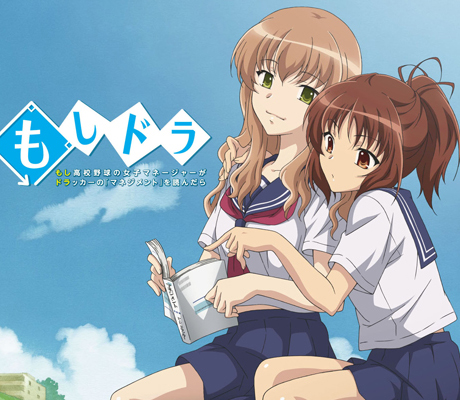 #1: Moshidora. EASILY one of the most overlooked and underrated shows of 2011. This anime was rapid fire and its 10 episodes aired on 2 sets of Weekdays. Coming from both a baseball loving dad and grandpa, I felt a soft spot for this show’s baseball theme. However, that’s not te only reason I liked it. There was also its gimmick of implementing Marketing Management strategies into Coaching a Baseball team. Oh, and most important of all: This is the ONLY anime of 2011 that made me cry man tears. Mock me if you wish but this show created many fond memories in my heart and for that, I will always look at it with fondness…unfortunately I can’t say the same for the Live Action Adaptation. 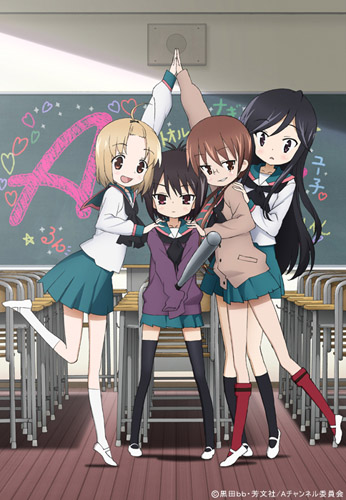 #2: A Channel: Yeah, yeah. I can already sense the critics cringing behind the scenes. I’m an Slice of Life guy, DEAL WITH IT! It has one of my fav OPs of 2011 and it’s nice seeing a lesbian protect her beloved with a baseball bat. So cute. We also got to meet Mio Akiyama’s distant cousin. My point is this was a very relaxing show and it was just I needed to escape the harshness of the real world. That’s what I primarily watch anime for: not to be enlightened or enraged, just to escape the fact of how difficult and harsh life can be sometimes. It’s nice to turn my brain off every now and then and just watch something that doesn’t require rational thought and let’s face it, anime doesn’t and never will make logical sense. Those who seek rationality should just stop watching anime altogether. Aoi Yuki.

Speaking of lacking in logic:

#3: Mawaru Penguindrum. This show made my brain go on overdrive. It had a very amusing 1st half but when it got 100% serious in the 2nd half with very few breaks in between, The amount of symbolism implemented is astounding. Then again it was made by the creator of Revolutionary Girl Utena. The characters ranged from neat, awesome to right out of those dreaded Star Wars prequels (I’m looking at you Kanba). Oh, and there were cute penguins….ESMERALDAAAAAAAAAA!

#4: AnoHana. This show is on this list for one important reason. Penguindrum also belongs in this category. Both these shows have no G-Rating. That’s right, I wasn’t able to give either one of these shows a solid rating because I felt of all the anime that aired last year, whether these shows rocked or sucked was ENTIRELY up to my fellow animeniacs. Some liked it, others didn’t (Thank you so much @). It isn’t exactly controversial because you can’t divide the love and hatred for these shows with a ruler like you could with a show like K-ON! They’re too uneven to estimate.

#4: Morita-san wa Mukuchi. the ultimate “bleep” tease last year. I was legitimately sad when the 13th episode aired and I thought it was over, but the writers a fast one and aired the 14th episode IMMEDIATELY the week after, I was trolled, but put it behind me and enjoyed what was basically a simple show with girls doing cute activities together while they all wanted Mayu Morita flavored pie for themselves. It’s amazing how many non-discreet opportunities each girl took to be alone with Mayu.

#5: GOSICK. Again I can sense all the cringing. If I haven’t made it clear by now, I’m in love with Aoi Yuki. It really is like I’m drawn to shows  with her as the lead role or just there. Case and point, Victorique is AWESOME! I honestly had no problem with the historical inaccuracy in fashion or the lack of hard to solve mysteries. I put those aside and saw this show as a funny, interesting and action packed adventure with a very cool climax and ending. Other reasons not only include Kujo and Victorique being a great team but also making me care care about their developing romance. When you can get a guy like me to care about a hetero romance, you’re doing something right. Oh, and Kujo is a real man’s man. Rock on Kujo!

#6: Kimi to Boku. I’ll keep this short. This show successfully proves that not all masculine cerebral functions are located beneath the belly. Men DO have a soft side. It’s difficult to find in today’s society but it’s out there. Believe me. 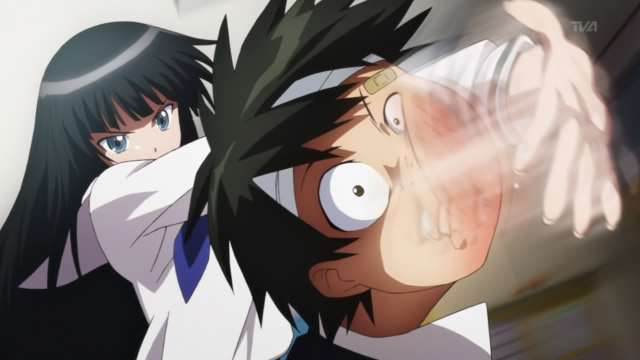 #7: Ben-To. Easily one of my favorite comedies of 2011 along with the following show. Aside from the obligatory serious episodes with the Monarch and what’s his name (The Kyo Twins’ arch enemy) every other episode was pure hilarity for me. the quality of male lead abuse in this show was exquisite. Also the fights were surprisingly epic, believe it or not. Even the pool brawl was entertaining. Kudos to all the awesome women who appeared on the show who thankfully failed to suck, especially the untouchable goddess, Ume Shiraume. Oh, and Aoi Yuki.

#8: Working!! 2nd season. This show successfully surpassed its predecessor by doing absolutely nothing new. I’m serious. Sure some of the characters had epiphanies here and there but when you look at the big picture, little to no progress has been made. There were new characters sure, but they didn’t help change much. Overall, there are 3 things we learned from Working!! 2:

2: Izumi Takanashi is the most beautiful novelist ever

3: Aoi Yamada is the greatest anime character EVER! I HAVE SPOKEN!

#9: Hanasaku Iroha. Cringing agaiiiiiiiiin. Best Slice of Life anime of last year, hands down. It’s controversial, entertaining, has characters both loved and hated by animeniacs everywhere and most of all, the most controversial catchphrase of 2011 whose meaning has been debated and lauded since Ohana uttered these words and has made it a meme few want to use: “Fest…it…up”! Personally, I wanted to enjoy as much of Nako and Yuina as possible. Also, I’m fascinated with Ohana’s head. Trust me, you don’t want me to write a paragraph stating why I like her head so much.

#10: Nichijou. It’s random, insane, nonsensical…yet somehow still make enough sense to tell a simple and easy to follow narrative. This one sentence alone will make your head explode after finishing this one because you know I’m right.

#11: Kyoukai Senjou no Horizon. Semi-inane politics, overinflated water balloons, epic battles where despite the cast being large, everyone gets a chance to shine, NaruKnight. I only have one last thing to say, Summer cannot come any sooner. Aoi Yuki.

#12: Ikoku Meiro no Croisee. @fkeroge’s least favorite show of the year. Ah, good man. Anyway, Yune is omega-kawaii, Alice is madly in love with her, it has a better fashion representation than GOSICK did and nobody sucks…yes, even Claude. 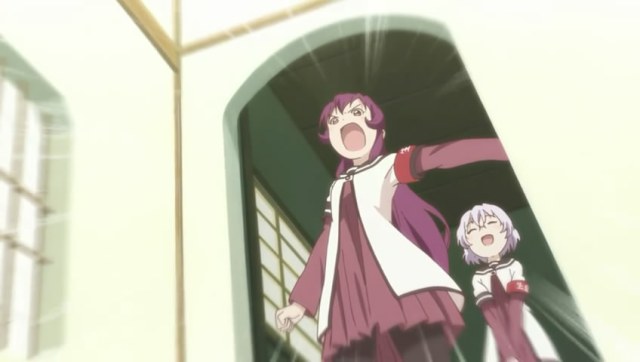 #13: Yuru Yuri. Despite it not being a work of art and some of the gags falling flat, it’s still an enjoyable little show that can. Hey, it did something very few yuri shows have been able to do over the years, get a 2nd season so my hats off to YY. Oh, and…TOSHINO KYOUKOOOO!

#14: Puella Magi Madoka Magica. You knew this one was coming. What more can I say? It revolutionized Magical Girl genre enough to make it relevant again, it dared to do something different, and it gifted us with MadoMura. For Pete’s sake, the show dominated in almost every category of my Yuri Award show. Like it or not, Madoka Magica for those who have seen it is something you won’t forget no matter how hard you try.

Well, there you have it. As always, if one of your favoritess isn’t here it’s because I haven’t seen it yet and when I’m able to or feel like it, I’ll get eventually get to them. That’s all for now. Take care, spike/wash your hair. WOO WOO WOO! You know it doods.

Done and done, finally. So what’s next?