Hello and welcome to G-Views, where SoL reigns supreme, moe is respected and Dokuro-chan sucks poopie. It’s once again time for a Double Slammy. This time we’re taking a look at two shows who have quite a dynamic similarity with one another. I am of course speaking of Lucky ☆ Star and Pani Poni Dash! To describe them both in full detail will be tough, but I’ll try my best to tell them apart from each other. Let’s roll doods!

Plot Summary: Portrays the lives of several school girls attending a Japanese high school with a very loose humor tone. The main heroine is Konata Izumi, an athletic and intelligent girl who, despite these attributes, is not in a sports club, and her grades remain low. Her laziness at school is due to her love for anime and video games, and she is not interested in much else.

As far as any plot on the show is concerned, there is none. It’s just the daily life of school girls and sometimes their families, teachers and other cool characters. You know, basic Slice of Life stuff. What drives this show, aside from the sometimes wacky events that occur in between, are the conversations that the 4 leading ladies have with one another, concerning random things such as how to eat a dessert or what cousin Yui does during work and in her spare time etc.
There are of course wacky characters such as the shopkeeper and his employees who have made it their life’s mission to get Konata to buy ANY of the merchandise that they have on sale. That for them is an adventure or Mission Impossible type situation.

Behold! The epic madness of the shopkeeper and his team.

The music: well, aside from the extremely catchy OP song, the music in the rest of the show…let’s just say it fits the theme perfectly. I can’t describe it exactly but it works.

The animation: If I had to describe it, it would have to be square and very 2D. The characters are quite sharp in the way they are drawn and have rugged edges.

Of course since Konata is an otaku, expect many references made of other anime shows throughout the series. As my dearest Asamoya pointed out, every episode makes at least 1 reference to another anime, most of these taking place in the 90’s and early 2000’s.
now you don’t need to know the anime parodies in order to enjoy the show, (it would help increase the fun factor if you did recognize some of them though) you can still have a great time enjoying the wacky stuff that takes place during the show.

Another highlight of the show (and a personal favorite of mine) is the pre-credit segment that takes place at the end of every episode before the credits begin to roll, “Lucky Channel”. One of the recurring jokes of this segment is the strained partnership between Akira Kogami and Minoru Shiraishi. While tenuous at best, Akira does show some affection for Minoru. Although most of the time the show discusses certain characters in Lucky Star, events in the actual anime or other things relating to the hosts of the show, Lucky Channel also has its own chain of events which have tie-ins to Lucky Star, making it a side-story. It’s the strained partnership part that makes me smile the most, because hearing Akira complain about every single thing she can think of brings a smile to my face. All for the sake of increasing her “popularity” by appearing on the show. Trust me, it gets worse (in a good way) with each episode.

If there was a negative point to the show is that sometimes they tend to drag on a certain topic in which the solution or point can be reached in a much shorter time than the party involved in the conversation need it to be. In short, a topic which can be answered in less than a minute instead of an entire segment. This example can be found in the very 1st episode, which is this show’s weakness because it has a slow start admittedly.

Here’s one of my favorite segments:

My personal favorite character is Minami. (Tall girl with the aqua green hair). I can’t explain why exactly, but she’s just so cute to me. I can’t stop looking at her and not go squee due to how adorable she is.

In conclusion: Although I said that this show can be enjoyed without having to notice the anime references, it’s not for everyone. I wouldn’t recommend this show to someone who just started watching anime or someone who has never seen an anime before. this one is more for the otaku or casual anime fan. Still, if you’re willing to give it a try, go for it.

Next up: Pani Poni Dash! This one will be a lot tougher. 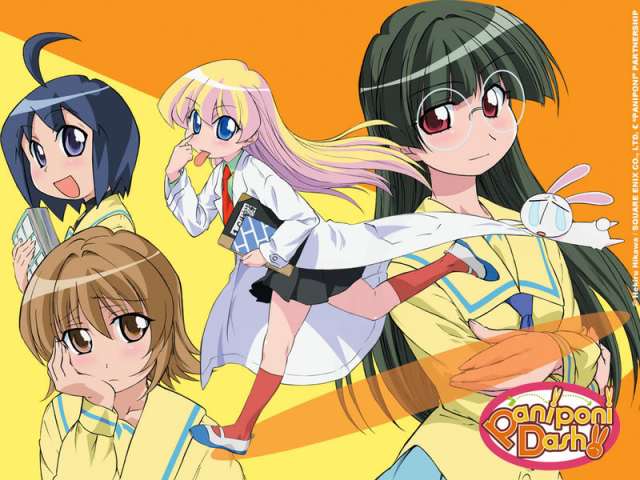 Plot Summary: The 11 year old Miyamoto Rebecca becomes the new teacher of a classroom which is full of weirdos. Despite her cute looks she’s a little beast and can be pretty sarcastic and offensive. The school is not safe anymore now that she’s in charge of a class and her students, Himeko, Ichijou, Rei and a white rabbit who took a liking to Rebecca help her to rough up the school and the neighbor-class with its teacher “ojiichan.”

Now even though Lucky Star might be plot less, Pani Poni Dash!s’ plot is nonsensical. Many things that occur on the show tend to make little sense and have no logic behind them, but that’s the charm this show has.

While LS relies on anime references and parodies to transmit their jokes when they’re not being wacky, PPD goes even deeper in their referencing and parodying. They make references to old school, 90’s, early 2000’s and Japanese customs, making it a bit more difficult to recognize the parodies and jokes being made. Some are easy to spot, while others…not so much. At least the wacky parts of PPD are just as funny as LS’

The music: Exactly the same thoughts as Lucky Star’s, the OPs are REALLY catchy and the rest of the music on the show…fits.

The animation: In contrast to LS’ squared-ness, PPD’s animation is…round, bubbly and fluffy, especially the female characters. They are more colorful and circular.

I’ll keep my character description short and maybe update it at a later date. Check out these ladies in action and you’ll get an idea of this show’s awesomeness. Suffice to say my favorite characters in PPD are:

The Kashiwagi Twins: Yuuma and Yuuna. they are so darn sexy. I have a fetish for teenage female twins in anime. Unlike real life celebrity twins, anime twins are attractive (or in younger twins’ cases, cute) and fun to watch.

Himeko Kataragi, aka “Maho” (Which is also her catchphrase).

A special shout out to Magical Girl Behoimi-chan. We miss you oh adorable one. Why did you retire?

And of course the main character, Becky Miyamoto herself. Child prodigy who has problems being taken seriously and is usually defeated and send to a corner in tears by a certain green haired hottie of a student.

Behold, the genius of Becky’s arch nemesis in action, also the extremely rare event of an anime character flicking people off.

In conclusion: I’d say that PPD is much harder to approach for beginners than LS is, but it’s still a great show to watch simply to hear Himeko say “Maho”…I love Himeko.

To sum up:
-Must enjoy Slice of Life anime.
-not necessarily requires much knowledge of anime and Japanese culture in order to enjoy both shows.
-Not suitable for beginners.
-must enjoy the word “Maho” in PPD’s case.
-Must enjoy plot-less/nonsensical shows with madness included.

Hope this review’s useful enough to guide people into the worlds of LS and PPD. this is The OG-Man, signing off.

Yuri and Slice of Life are my anime passion.
View all posts by OG-Man →
This entry was posted in G-Views and tagged comedy, coming of age, moe, otaku, parody, school, Slice of Life, troublesome teens, twins. Bookmark the permalink.