Hello and welcome to G-Views, where SoL reigns supreme, moe is respected and Dokuro-chan sucks poopie. And now, for more G-View facts. You see, when it comes to Ecchi, I’m kinda picky. Yes, I don’t like ecchi shows because of breasts, gorgeously unrealistic bodies and nipples, no, most of the time I focus on the deeper content at the other side of my nose induced red sea. Two things that matter to me when it comes to ecchi shows:
-Interesting character development or plot.
-If it doesn’t have either, fun girls to watch.
The following two shows in my view, mostly fall into the latter, but I suppose they have a little bit of the 1st one, not much, but it’s there. In any case, let’s take a look at To-Love-Ru and Girls Bravo, two ecchi shows that I enjoy for reasons I simply cannot comprehend.

As you’ve noticed, this is the 5th episode for both Double Slammy and ECCHIMANIA, so I decided to make another special edition episode by combining both segments into one.
This time, I’ll try something different with this G-View, it’ll feel similar to my Mai-Hime and Mai-Otome review because I’m going to compare each show’s similarities and allow the fans to have their own perspective when they get the chance to watch both shows.

Plot Summary: Small for his age, Yukinari has been bullied and abused by girls all his life. Now in high school, he has developed a rare condition: whenever girls touch him, or even come close, he breaks out in hives. Imagine his surprise, when he is suddenly transported to the city of Seiren on a mystic world invisibly orbiting the Earth, and populated with vast numbers of women and very few men. Fortunately, he has a new friend, Miharu-chan, whose touch inexplicably doesn’t affect him. 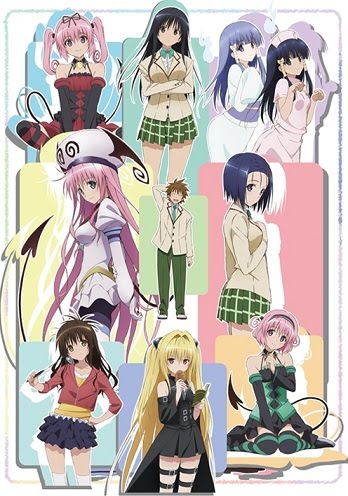 Plot Summary: The story is about Yuuki Rito, a high-school boy who cannot confess to the girl of his dreams, Sairenji Haruna. One day when coming home and sulking in the bath-tub a mysterious, nude girl, appears out of nowhere. Her name is Lala and she comes from the planet Deviluke, where she is the heir to the throne. Her father wants her to return to her home planet so she can marry one of the husband candidates, but she decides that she wants to marry Rito in order to stay on Earth.

Since GB came before TLR, it’s natural that the animation seems a little dated, but I don’t mind it at all because it looks crispy and sexy enough to me. All the characters on both shows look different enough, so there’s no problem when it comes to similarity. The different locations that take place on each show, GB’s Seiren and TLR’s other planets are what you expect from other unknown planets o0utside Earth., colorful and weird ased on the episode’s theme.

When it comes to the music, I like TLR’s better. Nothing wrong with GB’s, it’s just that TLR’s is catchier. Both have the usual mashing of humor and serious tunes when the situation calls for them. Basically, they both have good tunes, but TLR wins.

Characters: Hoo boy, “cracks fingers”
-Neither GB’s Yukinari or TLR’s Rito suck in my opinion. Sure they both have their annoying traits, but they’re both reasonable enough o be pitied. Though when it comes to favorite, I pick Yukinari this round because he actually has a problem that he has to overcome in order to be taken more seriously and have more self confidence. Rito on the other hand…I just don’t see him having to do anything drastic except maybe fight a few times. No offense, but I don’t feel the burn when it comes to Rito’s journey.

-Main female leads: GB’s Miharu is an adorable, magical bottomless pit. TLR’s Lala is an adorable, spunky, super strong inventor. Those are their differences. Other than that, they’re both similar. Both feel no shame exposing their bodies to the men they love, both are kind hearted and caring for others, both are airheads, both are the ones who have the highest chance of winning.

2nd place girl: GB’s Kirie is a hotheaded, busty, professional wrestler/martial artist, Haruna is a quiet, simple, yet powerful ticking time bomb who just needs the right button to be pushed in order to be activated. The only thing these two have in common is their affections for the male lead and the low chances of winning.

I could go on all day, but I’ll just cut this short by summing up the roster for each show:
GB has one of anime’s most perverted millionaires who is a good person, yet allows his desires to easily overcome him.
He has a sister who is a necromancer who falls for Yukinari for a silly reason.
She has two bodyguards, which include a female one who falls in love with Kirie because of her combat skills.
-The MILF of this show comes in the form of Miharu’s older sister Maharu, ho is determined to find a husband at all costs.
-The local loli speaks in 3rd person, wants to be treated like an adult, yet watches Magical Girl cartoons. She’s a magician who uses a hammer. A shy girl who has machophobia and finally the mascot Poio, who looks like a seal pup that is transformed into a little girl.

TLR has a rich woman who is obsessed with being seen as the hottest in school and becomes enraged when Lala steals her spotlight.
-A hermaphrodite who can transform into both genders just by sneezing.
-The student council president who is obsessed with order, and acts as the local tsundere. You can all guess where this is going.
-There are two local lolis on this show. First there’s Rito’s younger sister who has nothing special and is just there. The other one on the other hand…
-Golden Darkness: A space assassin who can use almost every part of her body as a weapon. Is also soft spoken and a “midget”. Again, you all know what this means. (No, she doesn’t join the club, I mean her actual age)
-This show’s MILF comes in the form of Dr. Ryouko, a doctor who tends to both human and alien. She also has mummy powers and other “skills”.

The thing is that both shows deal with alien species mingling with a human and the other humans who also ant a piece of poon-tang. Again, a familiar setting, but…you know, you have to watch the shows in order to understand why exactly these two are “different” from many other shows with the same concept.

I’m guessing that the main reason I like both show a lot is because not only are the girls amusing, but because both shows are ludicrously insane. I love insanity. Nothing new to most harem fans, but this show’s madness is what got me hooked to both shows and left an eternal impression on me, unlike Shuffle or Kampfer.

Not my best review I know, but hey, at least it’s a long one. Again, another character driven show and I have no gripes with such shows as long as they do it right.

In conclusion: Definitely recommended to all ecchi fans worldwide. If you don’t mind ecchi, I guarantee a laugh or two, no refunds needed.

P.S.: During one of my earlier reviews “Dance in the Vampire Bund” I made a complaint about not having found my megane when I was the lucky guy who did get the megane’s age. Today, I make that same rant once again, WHERE WAS MY MIHARU OR LALA WHEN I WAS RITO OR YUKINARI’S AGES?!