This my fellow doods, peeps and animeniacs nationwide, is a yuri review. A yuri hentai review. Why would I review you ask? Because…allow me to explain. You see, this particular H is different from most H you normally see. The thing is…with me anyway, I don’t like H in general. The usual Hetero sex and fetish based sex scenes do not amuse me one bit. However, that won’t stop me from digging up as many lesbian H scenes as I can, for that’s the ONLY kind of H that appeals to me. Moving on, never since Shoujo Sect have I seen an H this amazing, this romantic, this heartwarming, this adorable, this special. Yes doods, I’m talking about Sono Hanabira ni Kuchizuke o Anata to Koibito Tsunagi.
Or just Sono Hanabira.

“Sono Hanabira ni Kuchizuke wo (その花びらにくちづけを) began as a simple girls love visual novel that features a really light yuri story. It emphasized the soft romance between two girls and quickly became one of a kind in a world dominated by fetishist and heavy materials. It was also the first ecchi visual novel that features purely yuri relationships. Because of its uniqueness, it soon gained widespread popularity not only within the niche, but among many anime fans.

Following the success of the first game, Sono Hanabira quickly expanded into a series of games that all cater to the sweet fluffy side in us. Since its humble beginning, the visual novel series has also prompted several associated artworks, light novels, drama CDs, an artbook, and even an anime adaptation.

Impeccably complemented by Peko’s gorgeous artwork, Sono Hanabira is definitely one of the most adorable things I have ever seen.”

Now for my own additional info. The series of games currently consists of 8 episodes, with a fast approaching spin-off episode called “Hanahira!” and a 9th one coming soon. The episodes are divided into 6 couples.
First one being Yuuna Matsubara (Right) and Nanami Oda (Left). They are the stars of episodes 1 and 6. These two are the classic, Senpai X Kouhai type relationship.

Second is the couple of Kaede (Left) and Sara (Right) Kitajima. They’re both distant cousins, not exactly 100% related mind you. They’re the stars of episodes 2 and 4. 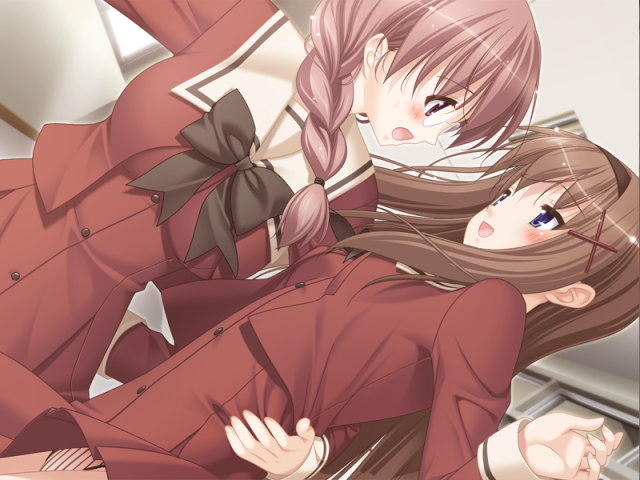 Third is the most popular couple of the series (And the main couple of the OAV). Reo Kawamura (Left) and Mai (Sawaguchi). Both are the same age and represent the busty beauty and “Shorty” couple. They star in episodes 3 and 5.

Fourth, is the extremely controversial couple: Runa Houraisen (Left) and Takako Suminoe (Right). They are a Student X Teacher type couple. They’re the stars of episode 7 and 10 (If you count Hanahira).

Fifth and 2nd most popular couple is Erisu Shitogi (Right) and Shizuku Kirishima (Left), the “College Queens”. They rock hard in episode 8 and the upcoming 11th episode (At least I think so). 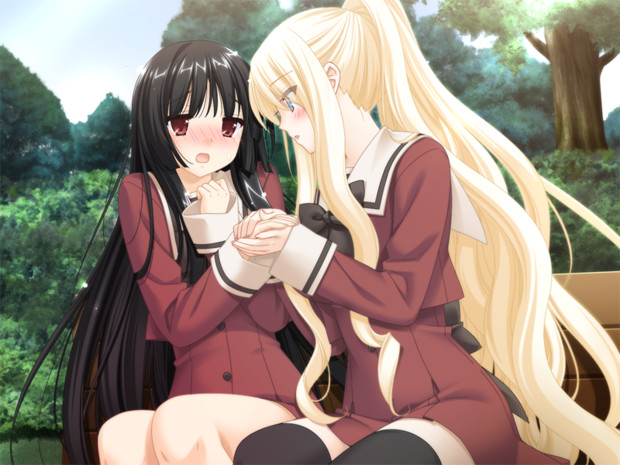 Number 6…is a fan requested episode, which is H-Free. Basically an episode that contains no H-scenes whatsoever, however, the girl love theme is still there thankfully.
My only complaint is that the characters are too young. Oh well, beautiful beginnings are a reasonable bliss to enjoy. Characters’ names in counter clockwise order .
Kaori Hanemura
Amane Yuuki
Koharu Uozumi
Makoto Toudou

As you’ve all figured out by now, the OAV focuses on couple number 3.

The animation is great. No complaints here. Mai and Reo are drawn very well from top to bottom, especially Mai…hohoho. One thing I do wonder is why they’re drawn with teary eyes, but that’s just pointless nitpicking. I really liked the petal animation for both the intro and the end. It adds more calm and serenity to this work of art. The locations are also well done. There aren’t that many really.

And now for the characters. Mai and Reo. That’s all of them, just two. We have Mai, a Dogged Nice Girl and Reo, a type A Tsundere Believe it or not, the sex is NOT the main attraction in this one, it’s the developing romance between the two girls that matters. No, really. It’s that good. It’s like while watching, you can truly believe that these two women love and care for  each other deeply. Even while making love with each other, the words that are spoke, some classic and others very deep, are what make this couple special. Of course, the lovemaking is also pretty good. I consider it a bonus more than a necessity. The words spoken help intensify the lovemaking even further, allowing the viewer to believe that they love each other both physically and mentally. Plus, they’re so cute together. A perfect match.

In conclusion. If you’re a yuri fan, WATCH THIS H! It’s harmless, trust me. It’s softcore love at its finest. If you’re an H fan, it all depends on what you fancy. If you’re into bulldung hardcore suff, skip this. If you actually pay attention to what’s going on and watch for the plot rather than the sex, then check this one out. As for everyone else, you already know the answer.

I would like to thank the following people for all their hard work, dedication and in depth analyses on this series. I salute you all!

Team AXYPB inside their labyrinth located in the middle of the South Pole: http://axypbworld.wordpress.com/

Plus some other awesome doods and peeps I don’t know yet like Count Pacula.