Hello and welcome to G-Views, where SoL reigns supreme, moe is respected and Dokuro-chan sucks poopie. I’ve been waiting a long time to review this series and after finishing the 3rd season a half hour ago, now is the time to review my all time favorite ecchimania series, Koihime Musou. 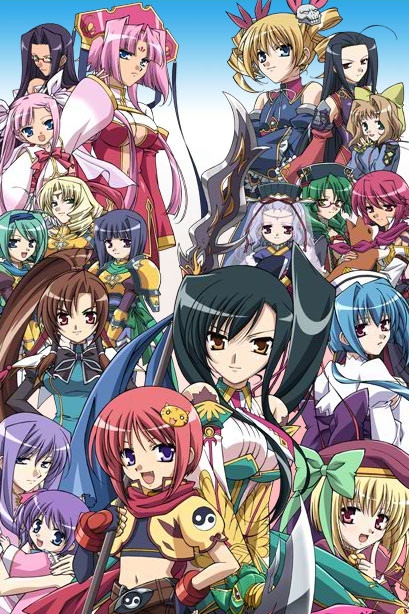 Plot Summary: After losing a family to bandits during a night raid, Kanu swears she will not let others share the pain she experienced that night. She quickly becomes a well-known and feared by villains bandit hunter. During her journey she comes across others, who wish to join her in her cause. One of them is a girl named Rin Rin, who had similar experience with bandits in the past.  Along their journey, they will meet a massive array of other ladies (and some gentlemen) with an episode dedicated to each character.

Let’s make it simple. This is the 2nd anime that turns most of the well known 3 Kingdoms period legends, into cute and sexy women. However, even though Ikkitousen’s cast is large, Koihime Musou’s is much, MUCH larger with even more characters introduced at once. Besides the recurring ones, I’d like to see anyone who watches this show, even ATTEMPT to remember them all. The biggest difference between IT and KM is that KM is lighter and less serious than IT. However, that’s not a bad thing AT ALL. There is action, no doubt about it, but less magic is used. So for all of you who light sparkly light beams and explosions, there’s little to none of that here, just fist fights and weapon combat. You could call this entire series an action/comedy of sorts, with some bootyliciousness and some madness.

Anywho, each episode tends to focus on our heroes as they help other members of the cast out with their problems, while the show continues to lead us to its main plot, which is the main battle that will unite everyone against a common foe.

Another common aspect of the show and my personal favorite is what I like to call: Chibi-Mode. Chici-Mode is a random moment in each episode, where the cast is chibified during a conversation, mostly a comedic one. These modes last 30 seconds at most, so they’re not long, but they’ve have become such an important part of the show that not having one in an episode is considered blasphemy.

The music is both epic and funny at the same time. During the serious moments it’s serious. During the action scenes it’s badass, and during comedy skits it’s funny. So I wasted all of your time by stating the obvious. Oh, and each season’s OP songs are awesome, with the ED being more comedic. My personal favorite is the 1st season’s OP.

Final Verdict: You must watch this show in order to understand what all of my explanations mean, since it’s not easy to understand by reading this review alone. It’s up to all of you whether you’ll give it a shot or not, but it’s that darn good in my opinion