Welcome one and all to the controversial episode of G-Views. For everyone who knows my catchphrase (Hello and welcome to G-Views, where SoL reigns supreme, moe is respected and Dokuro-chan sucks poopie.) THIS, is the review that explains EXACTLY how I feel about Dokuro-chan.

The following “review” contains very strong language and is not for the weak of heart. You have been warned. 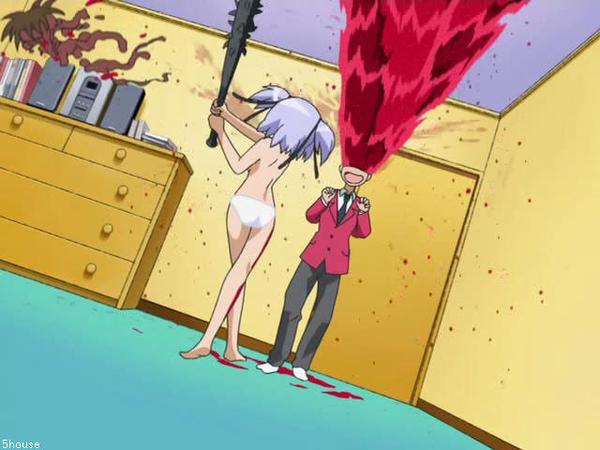 WARNING!
For everyone who is a fan of this show, it would be best to stay away from this review, because if you’ve seen my anime list, you can pretty much guess how I feel about this…show.

For everyone else, this will be more of a negative rant than an actual review, but I’ll do my best to sum up in short why I feel this way.

Plot Summary: In the future, a man named Sakura is destined to create the technology for eternal life, which (due to Sakura’s lolicon tendencies) freezes all women’s aging once they turn twelve. God refuses to allow this, so he sends his angels to the past to kill Sakura before he can do this. But one angel, Dokuro-chan, decides to try to change the future without killing him. Problem is, Dokuro is very temperamental, and is constantly killing Sakura (and lots of other people too) in incredibly bloody ways with her giant spiked club. Good thing she can bring people back to life – if only to gruesomely kill them again the next time she loses her temper.

Let’s begin with the story itself. Really, time traveling Angels who were sent from the future to stop a kid from growing up and creating a “Pedophile’s World” from plaguing the Earth?
Some would say, oh this is anime, anything goes when it comes to plot. Yes, I do agree with that, but still, in my opinion, this is ridiculous even for anime standards. 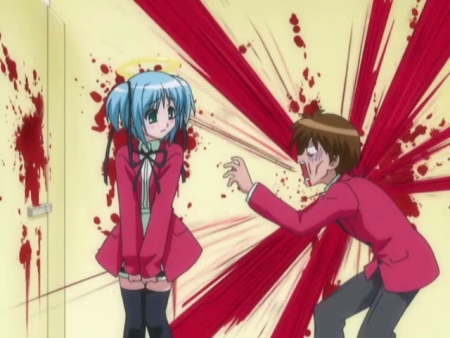 Sakura…Sakura…what can I say about this dork? He’s your cliche clumsy, gutless, tongue tied, hopeless and moronic male harem lead. Even though that’s the classic formula for male harem leads, he still gets on my nerves. Even Tsukune from Rosario to Vampire is more respectable than Sakura and I hate that guy. CURSE YOU FOR STEALING KURUMU’S HEART FROM ME! SHE’S MINE YOU PRICK!

Also, uncontrollable diarrhea when an angel’s halo is removed? I’m sorry, but is diarrhea supposed to be funny? I could have accepted that the angels would turn pale and make disturbing faces, but diarrhea? Look, a fart joke can be funny if used at the right moment, that’s cool. But seriously, I fail to see the humor in a being’s uncontrollable bladder or “hole”. The same feeling goes towards vomiting.

The only character in the entire show that I felt the LEAST bit of admiration for, was Shizuki. Her sanity among the rest of the cast made her likable to me, however that didn’t last long either.

I could go on, but I’ll just wrap this up.

No all those things are slightly tolerable, but the one person who made me hate this piece of garbage to no bounds is Dokuro-chan herself. She has got to be the most annoying, dimwitted, short tempered, retarded anime angel I’ve ever seen in my life. Her running gag…..OHHHHHHHHH……that STUPID GAG! That annoying club, that irritating resurrection spell!
I don’t mind that they use it once or twice per episode, but sometimes they rely solely on that gag to get the laughs. In all honesty, it gets old quicker than my jokes, so old, that seeing it over and over and over and over and OVER AND OVER AND OOOOOVEEEEERRRRR AGAIN, DROVE ME INSANE!!!!!
It made me rip my hair out, ask my parents to measure my level of sanity, almost made me retire from blood and gore…thank goodness I survived.

In conclusion, this show receives the official G-saster rating of 4/10
Why not a 1? Because I can understand and respect that the writers wanted to come up with something different. Sadly, I consider their end product a total failure.

This is without a doubt, THE WORST ANIME I HAVE EVER SEEN IN MY LIFE!!
I’ve seen some mediocre anime before, like Arcade Gamer Fubuki, Hanappe Bazooka, Puni Puni Poemy. They’re not masterpieces by any means, but they’re DEFINITELY more tolerable than this……this piece of cow dung.

I’ll tell you this Dokuro-chan: If you did exist and I obtained the opportunity to remove that helo from your head, I’LL DESTROY YOU!!! I’LL SNAP YOUR LEGS, FEED YOUR DIARRHEA YOUR SAKURA FOR BREAKFAST, STOMP ON YOUR HEART AND SEND YOU TO THE DARKEST DEPTHS OF HADES!!!!
FUCK THIS SHOW, FUCK IT TO DAMNATION OF MANKIND.
This show made me question the very sanity of the human race.
This show gives me diarrhea every time I think about it.
This show made my ears burn from day 11.’
“The manga says its quite up there in quality, yet its genre is mature and echi so expect blood and pointless fanservice.”
Fanservice? FANSERVICE? WHAT PRAY TELL WAS FANSERVICEY ABOUT IT?! DOKURO-CHAN HERSELF? I WOULDN’T BANG HER FOR ALL THE MONEY ON EARTH AND MARS COMBINED!
This show is so FUCKING destrucitizing, DAMN IT!!! AAAAAAAAAAAAAAAAHHHHHHHHH!!!!!!!!! “Head explodes”

Yuri and Slice of Life are my anime passion.
View all posts by OG-Man →
This entry was posted in G-Views and tagged angels, comedy, dark comedy, Dokuro-chan, ecchi, HAAAAAATE!, magic, magical girl, romance. Bookmark the permalink.